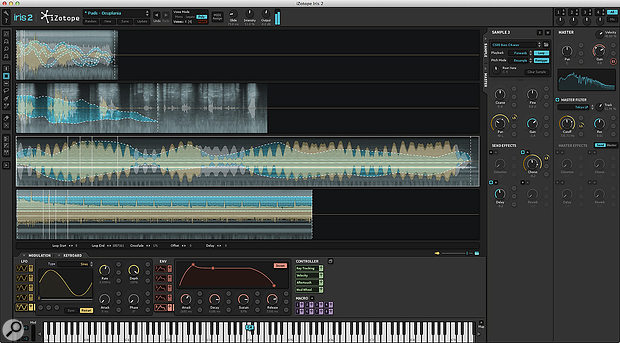 Iris 2 allows four simultaneous layers, although your CPU may not thank you.

iZotope have upgraded and expanded their graphical synthesizer Iris. We see what’s new.

It hardly seems five minutes since I was extolling the virtues of Iris, iZotope’s innovative take on sample resynthesis, yet it’s over two years. During this time users have had the opportunity to play with and comment upon this unique, spectrally filtered graphical synthesizer.

If Iris 2 were a Hollywood sequel, its aim would be clear: to supply more of what you enjoyed in the original movie. In that sense, it’s bang on the money. Iris 2 is larger, more polished and addresses several weaknesses, but does it match the charm and impact of its older sibling?

After weighing up the upgrade offer, owners of Iris 1 will doubtless have spotted that version 2 costs slightly less than theirs did, but is approximately three times bigger. Iris 2 is quite a large download: 11GB if you choose to take all the available content. Fortunately, if you have monthly broadband limits, you needn’t grab it all at once. It’s neatly divided into ‘Core Content’ installation and sound libraries, with seven different categories available: Abstract, Environments, Instruments, Objects, Synthesizers, Toys and Voice. Within each you’ll see sub-categories, their names usually informative and often intriguing.

Once installation is complete (it’s a choice between iLok or a challenge/response authorisation), you might wish to move that 11GB lump of data from the system drive to an alternate location. (I speak as a Mac user fussy about such things). If so, you’ll also need to update the library pointers within Iris 2 via the ‘manage libraries’ option. That done, you’re ready to explore.

Thanks to a subtle makeover, Iris 2 has become darker and classier, but otherwise the interface is as welcoming as ever. During the manual library copy, I noticed one of the aforementioned weaknesses had already been tackled. In this version the samples are all 24-bit WAVs, ie. no longer in a proprietary format that can’t be used elsewhere. The original Iris data is included too, remastered and slotted in amongst the fresh material. I was particularly struck by the potential offered by the many long-duration samples of classic synths (many of which you wouldn’t even need to loop), as well as environmental sounds, machines, voices and a cross-section of instruments. These can all be adopted by any sampler for use as you wish, as well as providing great beds that support some of the more unusual material in Iris 2. Looking through the list, I was curious to check out the recordings of angle grinders, popcorn and a tomato being stabbed. 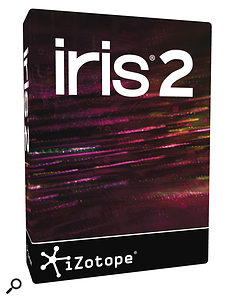 Although the original content is duplicated, the two versions of Iris are kept entirely separate so there’s no need to adjust any old songs. Having made the leap and upgraded, I’d expect most users to gradually phase out the earlier version, once they have imported any user patches (one at a time, I’m afraid). The import process requires at least version 2.01 or the program will totally fail to recognise the earlier proprietary sample format. And in another source of potential confusion, the update from 2.0 to 2.01 ignores any change of base library location you might have made, reverting back to the default location on the system drive. Doh!

For the full low-down on iZotope’s graphical slant on resynthesis, please refer to the original Iris review from the July 2012 issue. In a nutshell, you’re given Photoshop-style drawing tools to create spectral filters that home in on selections within existing audio. This apparently simple process unleashes sounds you may never have known were lurking within.

Previously, a patch consisted of three samples plus a kind of sub-oscillator that you could persuade, with a spot of manual intervention, to behave like a regular sample layer. In version 2, the manual element has been eliminated, leaving four identical layers, each of which can be populated from the treasure trove of synth waveforms, cellos, circuit-bent toys or onions being peeled. It can still be CPU-greedy though, especially if you use all four layers and the high-quality ‘Radius RT’ playback mode.

The most obvious step forwards is the major upgrade given to modulation, in the form of extensive inter-connectivity and a redesigned interface. Colour is employed to identify each modulation type and over 100 parameters can now be modulated by a generous selection of sources including five LFOs, five envelopes, MIDI CCs and Iris 2’s own macro knobs. While this is the same number of LFOs and envelopes as before, they can now be freely allocated and the sources distributed to pretty much every important parameter. You can do crazy stuff like have an LFO modulate its own shape, depth and frequency, or have velocity modify the times of envelope stages. In addition you have free reign over the ‘deeper’ effect parameters, accessed by neat pop-up menus.

Amongst several methods of assigning modulation, I have to applaud the ‘click on source then click on destination’ technique of adding connections. It’s elegant and far easier than the more commonly seen drag-and-drop, especially when traversing a large monitor with a temperamental mouse.

Further changes can be found in the effects section, which has undergone a buffing-up and layout change to accommodate modulation points. The primary enhancement is an improved and cleaned-up delay, which now has a maximum time of 4000ms (as opposed to 1500ms formerly). Modulate the left and right delay times, say, with a couple of LFOs running at slightly different speeds, then control LFO depth with the mod wheel and you’re heading into sound-design territory even before making your first graphical selection. 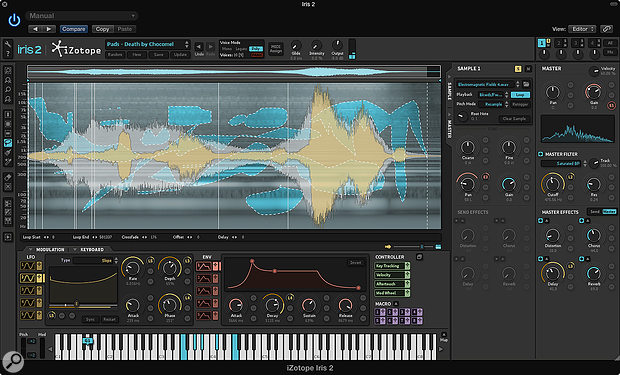 Within the Spectrogram area, a few graphical selections are the first stage in discovering something entirely new from any audio source.

The plate reverb is a reasonable balance between quality and CPU and, while I’d probably still take Logic’s built-in reverb in preference, this now offers such pleasures as transitioning from bathroom to warehouse over the lifetime of an envelope. iZotope have plundered their favourite effects from elsewhere too, lifting distortion and modelled filters from Trash 2, but while all these benefit from the extra modulation possibilities, the effects remain fairly straightforward. The user has the choice of a send-type system or a blanket master effects configuration to process all layers equally. The modelled filters (inspired by Moog, Korg, etc) are only available as a master effect; you can’t use a different one for each layer.

The master section’s brand-new spectrum analyser is both a visual treat and an invaluable tool for making sense of the spectral selections. However, when you turn to the basics of operation, other than the modulation upgrade, there are no major boosts. The four samples are layered and mixed as before and, although they can be confined to specific key ranges, this never resembles the performance of a typical sample player, which is hardly a concern — the world has plenty of these already.

For many sound designers, Iris was a dream come true, but there were some blatant gaps. Firstly, while there’s a good-quality (but CPU-greedy) pitch-shifting algorithm that reduces the ‘munchkinisation effect’ (which occurs when samples are played far from their root frequency), there’s no time-stretching. Sadly, this continues to be the case. Secondly, and of less importance, the painting and selection tools lagged behind those of comparable graphical applications, and they still do. There isn’t even a straight-line tool, let alone tools for making custom, crinkly lines, or cookie-cutter selections. You can get around such graphical limitations with time and carefully zoomed mousing, but the separation of pitch and playback speed seems such an obvious requirement that it’s disappointing not to see it in version 2.

To get a taste of what Iris 2 is all about, the browser features a ‘random’ option that serves up choices from the factory set — often a more rewarding method than choosing manually. Patch-loading isn’t instantaneous, but assuming you don’t mind the brief pause, you can sample the latest factory sounds and hear what a difference a couple of years can bring. With over 350 patches, these are much improved and more polished than the previous bunch. Once again, the best and most inspiring are found in the ‘pads’ category with ‘rhythmic’ a creditable runner-up. This isn’t to dismiss the synth, keys and bass categories because they benefit hugely from all those vintage synth samples, but I’d suggest they remain the least striking parts of the package. Here’s a small selection of my personal favourites:

The new, improved patch library and extra content give Iris 2 a more rounded feel and thus a better first impression. While I wondered how many experienced users would have written ‘more samples’ at the top of their wish-list, I can’t deny there’s a wealth of material — enough to keep you occupied for a very long time. For myself, and I suspect most others, it’s the extra modulation connections that will make Iris 2 a desirable upgrade. Whether you’re into inter-modulating LFO frequencies, or adding delay and feedback with keyboard tracking, the near-modular flexibility is not to be sniffed at. Yet despite these advances, Iris 2 doesn’t quite feel like a major increment. It’s a pity that spectral selection hasn’t been blessed with more exotic tools, but it’s even sadder that time-stretching hasn’t made an appearance. Perhaps it would have tipped the already-taxed CPU over the edge, but even so, I’m putting in my requests for version 3!

Let’s not forget that a quartet of spectrally filtered samples can yield the most tripped-out, intense, atmospheric pads you ever heard. Iris 2 has everything Iris had, with the advantages of flexible modulation and a ton more samples to rummage through. Priced a little lower than its predecessor, Iris 2 is unsurpassed for ambient sound sculptures, textural synthesis and otherworldly effects. If those things turn you on, it’s high time you checked out the demo version.

Iris 2 continues to walk a fine line between synthesis and sound engineering. While still lacking time-stretch and a few other refinements, the larger store of raw material and improved modulation ensure it’s a worthy upgrade.