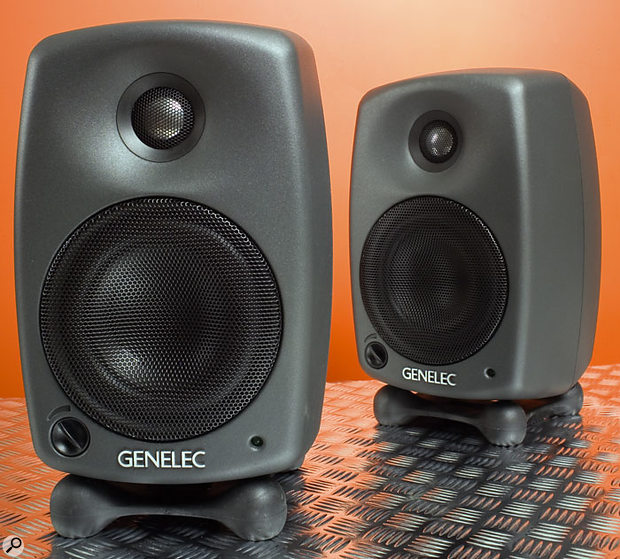 In an ideal world, we'd all have pristine monitoring environments equipped with accurate monitors flat down to 40Hz and capable of 115dBSPL or more, but the reality is that some rooms are too small to accommodate such monitors. Indeed, some jobs simply don't need that kind of level or bass extension. For example, if you have a programming suite that you use for writing sequenced music, then you can probably make do with smaller speakers until you come to do the final mix, whereupon you can move to the main studio. Similarly, in a small home studio, smaller monitors can be used both for writing and for producing reasonably accurate mixes, as working at high SPLs may simply not be practical.

Genelec's new 8020A monitor is the smallest in the 8000 series, but still features an active two-way design. Controls on the rear panel optimise the audio performance to best suit the environment in which the speakers find themselves. With a decidedly compact 151 x 142mm footprint and a height of just 242mm, the rear ported 8020A features a die-cast aluminium enclosure with integral high-frequency waveguide and rounded corners to minimise diffraction. The shape also makes the case extremely rigid, which in turn cuts down on unwanted cabinet resonances. The drivers comprise a 105mm bass/mid-range driver augmented by a 19mm tweeter firing into the waveguide depression moulded into the front of the case. Both drivers are magnetically shielded. Each driver has its own 20W amplifier on board, fed from an active crossover operating at 3kHz, and driver protection is built into the system. Despite being tiny, even compared to the earlier Genelec 1029A, the free-field frequency response is quoted as being 66Hz-20kHz ±2.5dB with a maximum SPL per pair at one metre of 105dB. 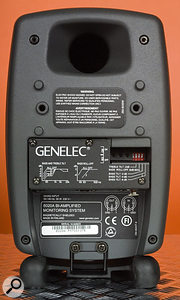 Below the reflex port on the rear panel are threaded inserts which allow for mounting the 8020As on wall brackets — the screws at the bottom of the rear panel will release the Iso Pad desk stands in this case.Photo: Mark Ewing

In situations where the maximum SPL is adequate, but where the bass extension needs to be greater, the 8020As have been designed to work with Genelec's new LSE subwoofer, which provides bass management for surround or stereo and extends the low-end response down to 25Hz.

Mechanically, the 8020As are nothing if not solid, weighing 3.7kg each. The drivers are both protected by acoustically transparent metal grilles, and there's a level control (with integral power switch) accessible from the front panel as well as a power LED. The integrated rubbery Iso Pad provides secure anti-resonant mounting with a useful degree of 'tiltability', and the rear port is flared to reduce the turbulence that can cause noise and distortion. Power comes in via a downward-facing IEC socket, and the input female XLR is accompanied by an opposite-sex version allowing up to six 8020As to be daisy-chained from one line-level source. My own preference would be for the input to be a combi jack/XLR for the sake of flexibility, but a quick rummage in the cable box found me the necessary balanced jack to XLR leads I needed to hook up to my monitor controller. DIP switches are available for setting the EQ of the system, with a choice of flat or treble tilt at the high end (-2dB below 5kHz), bass tilt (choice of -2dB, -4dB or -6dB) for half-space mounting against a wall, and an 85Hz high-pass filter — this should always be active when using the speakers with the optional subwoofer. If the 8020As are on a console meterbridge, the recommended setting is to have everything flat except the bass tilt, which should be set at -4dB.

Despite their almost laughably small size, the 8020As maintain the Genelec family sound and also deliver a very credible impression of low end within their power range. When used in the nearfield position, there's adequate level for most types of work, other than perhaps for evaluating dance tracks at 'battle level', and unless you push the speakers too hard the sound retains its integrity and clarity surprisingly well. I can't think of any speaker this size that delivers such clean, wide-spectrum audio as does the 8020A, and although the Genelec sound is considered a little forward by some engineers, the degree doesn't seem excessive and there's a useful amount of adjustment anyway. The bottom line is that if you need small monitors that behave like big monitors, only not so loud, then the 8020As come pretty close to being ideal.

Genelec fans will love the 8020As, as they deliver the same family sound as the rest of the 8000 series, with decent bass extension, but at a lower level.