Genelec have earned a reputation for good-sounding small monitor speakers, but can their DSP system make them sound even better? 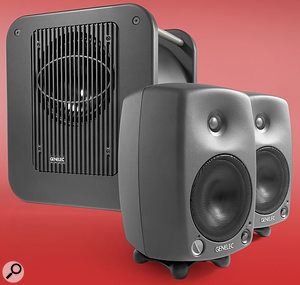 Every loudspeaker system is affected by the listening room's dimensions and acoustic treatment. Traditionally, professional monitoring systems were equalised to compensate during the install by the manufacturer, and a significant degree of skill and experience (not to mention expensive acoustic analysis equipment) was necessary. However, the Finnish manufacturers Genelec are amongst the pioneers of self-configured DSP room correction, with their Genelec Loudspeaker Management Small Environment DSP alignment system (GLM SE DSP). As the name suggests, this system is intended for small environments such as typical project studios and smaller control rooms, and all the hard work is performed by DSP contained in the SE7261A subwoofer, with 'corrected' signals being sent on to 8031A digital satellite monitors.

The 8130A satellites are essentially the same as Genelec's rear-ported 8030A monitors, except for the inclusion of a 24-bit, 192kHz digital audio interface. The low-frequency response extends down to 55 Hz (-3dB), and a pair can generate peaks of 108dB SPL at one metre. The five-inch bass driver and 0.75-inch metal dome tweeter are both magnetically shielded and driven by their own 40W amplifiers. The cabinet measures 299 x 189 x 178mm, including the isopod base, and weighs 5.6kg, and this compact size makes it ideal for near-field monitoring in small control rooms. An XLR input connector accepts both AES3 digital audio and balanced analogue line inputs, and two more XLRs output (stereo) AES3 and (mono) analogue signals for linking to other speakers. Rear-panel DIP switches provide basic response equalisation, sensitivity and digital channel selection. 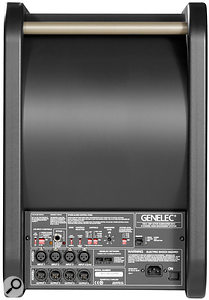 The hard processing work is done by the DSP inside the 7261A subwoofer, which connects to your computer's USB port via an RJ45 connector and the supplied adaptor. The audio I/O is digital-only (AES3), via the XLR connectors on the rear panel.The complementary SE7261A active DSP subwoofer connects entirely in the digital domain (something that may not appeal to everyone) and, as mentioned above, incorporates the SE DSP technology for response correction. To that end, the subwoofer includes an RJ45 connector for networking with a remote computer and contains the DSP resources necessary to correct up to the eight channels necessary for 7.1 surround configurations.

The specifications claim the SE7261A can produce over 108dB SPL from its 10-inch driver (which is powered by an integrated 120W amplifier), with a free-field response of 19-100Hz (±3dB). The usual sensitivity, boundary-correction and phase-alignment controls are provided on DIP switches. The cabinet measures 527 x 462 x 363mm and weighs a chunky 27kg, and the side-panel features four AES3 inputs and outputs, all of which are 24-bit/192kHz capable.

Hooking up a system involves little more than plugging the AES3 source(s) into the subwoofer and running the designated outputs to the satellite speakers. Once the basic system is up and running, the software can be loaded onto a computer and linked to the subwoofer through the bespoke interface, which converts between the computer's USB port and the network port on the subwoofer, as well as accepting the signal from the supplied 8200A acoustic room measurement microphone. The GLM SE software (which I ran on a Windows XP-based PC, but is also Mac-compatible) can be operated semi-automatically with a wizard-based approach, but you're also able to tweak the DSP settings manually.

The Genelec 8000-series monitors are well known to me and the unaligned 8130A/SE7261A system performed exactly as I'd expected, displaying all the qualities associated with these reliable, ubiquitous monitors: great imaging and an open, extended sound, albeit slightly aggressive or forward in character. I don't have the space for a detailed description of the Genelec 8000 series' sound here, but Paul White reviewed the 8040/7060 combination in Sound On Sound December 2004 (www.soundonsound.com/sos/dec04/articles/genelec8040.htm) and this will give you a very good overview of this system. 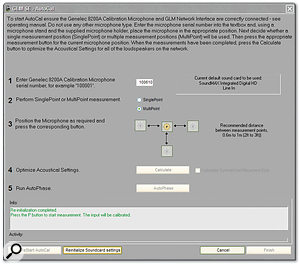 The supplied software includes 'wizard' utilities that make the necessary system-configuration and acoustic calculations for you — but you still have the option to tweak things yourself if you prefer.I placed the satellites of the 2.1 review system alongside my usual PMC reference monitors, with the subwoofer in the same plane but offset from the centre of the room. Loading the software onto my laptop was trouble-free and it found the network interface straight away. The system setup wizard then allowed me to specify a 2.1 configuration, and check the cabling and AES3 channel allocations to each speaker.

Next, I ran the acoustic setup wizard, and was asked for the serial number of the measurement mic, so that the appropriate calibration file could be retrieved. The usual barrage of tone sweeps was then produced to calculate the impulse responses for each speaker in turn. I used the multi-point Autocal mode, and was instructed to move the mic around the listening position while the process repeated four times. As I'd expected, there were numerous options in the software to fine-tune the setup for different configurations, but the immediate results were impressive. My listening room has modest, but known, standing-wave peaks at about 30Hz and 90Hz, and a dip at 60Hz — all of which the GLM system found and tamed well. The result was a noticeably more consistent bass response and slightly improved imaging, and the integration between satellites and sub was utterly seamless. I didn't notice much change of character in the mid and upper areas of the spectrum apart from a small improvement in imaging — but the software does allow for some tonal rebalancing, should you feel the need for it.

As we've explained in previous articles in SOS, this kind of DSP room-correction isn't designed to 'fix' atrocious room acoustics or inappropriate speaker positioning — but it does enable a sensibly installed system to perform to the best of its capabilities in a reasonable room, and that is well worth having. This isn't anything like as complex a system as, say, the Trinnov Optimizer, but it is easy to use and works well, with a minimal cost penalty.

The whole raison d'être of the 8130A/SE7261A system is to permit optimal room integration through DSP equalisation, but the fundamentally revealing and consistent character of the Genelec 8000-series monitors shines through regardless — and a basic 8030/7050 combination (or 8030/7060 set up for surround applications) would provide much the same quality, but require manual optimisation and be more room-dependent. If you want the DSP capability, but without having to invest in the subwoofer, you could also consider Genelec's 8240A or larger 8250A models, which contain the same DSP technology and can be calibrated with the same GLM software and measurement mic system.

A growing number of other manufacturers' systems are incorporating simple room-correction facilities, such as Dynaudio's Air series, JBL's LSR432xP (with Room Mode Correction), Tannoy's Precision 6 and 8 iDP and their Ellipse 8 and 10 iDP. There's also a growing number of external room-correction processors and plug-ins, such as the IK Multimedia ARC and Trinnov's Optimizer.

Familiar but enhanced Genelec monitoring system with integral DSP-based room correction faciltities. All-digital I/O on the sub may restrict the application for some, but the system is easy to configure and provides beneficial room alignment for minimal effort.