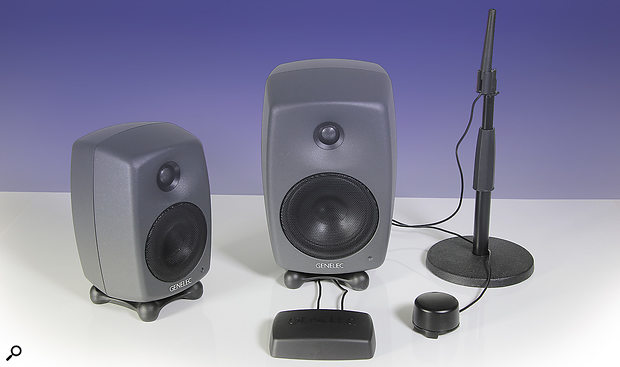 The latest monitors in Genelec’s 8 series come in new APM packs, with room analysis and correction tools. We put them to the test.

At first glance, the bi-amplified 8320A and 8330A — the latest additions to Genelec’s nearfield monitor line up — look little different from their 8000-series antecedents, but appearances can be deceptive. Genelec’s signature grey, die-cast aluminium MDS (Minimum Diffraction Edge) enclosures, featuring the integrated ‘Directivity Control Waveguide’ and sitting on Iso-Pod decoupling mounts, lend instant familiarity. However, once you take a closer look, little remains unchanged.

Both monitors carry a three-quarter-inch metal dome tweeter, with bass frequencies below the 3kHz active crossover frequency being handled by a four-inch (8320A) or five-inch (8330A) woofer, which drives into a rear-facing reflex port. In both models, separate 50W Class-D amplifiers — a significant increase in output over earlier ones — power each driver, giving a frequency response of 66Hz to 20kHz to the 8320A and 59Hz to 20 kHz to the 8330A (±1.5dB). A matching 5.1-capable active subwoofer, the 150W 7350A, is available if you require an extra octave or so of bass response.

Students of Genelec’s 8000-series nearfield nomenclature will recognise the ‘A’ suffix as having been applied to the Smart Active Monitor (SAM) variants, which have, until now, carried AES/EBU digital inputs in addition to XLR balanced analogue inputs. Anomalously analogue, the new 8320A is a SAM, but carries no digital input.

Launched back in 2012, the SAM moniker brought all Genelec’s DSP monitors under one marketing concept, where technology and software would combine to improve sonic performance, bring new user facilities and improve the integration of loudspeakers and subwoofers with their acoustic environment. Central to this new concept was AutoCal, Genelec’s acoustic calibration system, which formed part of the Genelec Loudspeaker Management (GLM) software package. GLM made it possible to automatically calibrate the acoustic performance of a SAM system not only by aligning levels and adjusting loudspeaker delays at the listening position, but also by compensating for the influence of the anomalies in a given room’s frequency response. 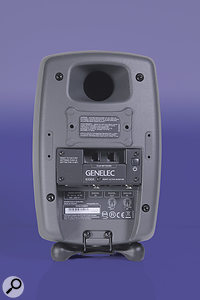 Both speakers have, in addition to their audio inputs, RJ45 sockets allowing them to be networked and configured from a computer.In a SAM system, room compensation is carried out in DSP by a sophisticated automatic system-calibration algorithm, rather than by analogue filters, which are less precise and less flexible than digital ones. SAM monitors are connected together by a proprietary control network, and the GLM user interface allows the engineer to work with all components of the SAM system in order to optimise them for the environment and application. Genelec also developed their own measurement microphone, enabling the GLM to incorporate both single and multi-point measurements of the acoustics in the listening area.

Both the 8320A and 8330A arrive packaged as pairs, with each pack including a GLM 2.0 adaptor hub, its 9310AM remote volume control and 8300A calibrated measurement microphone, plus a USB cable and two RJ45 network cables. Once you’ve decided on monitor placement, cabling up the control network is simply a matter of daisy-chaining the adaptor and monitors using the RJ45 cables, plugging the measurement microphone and volume control into the adaptor, and using the supplied USB cable to connect the adapter to your PC. Since one computer running the GLM 2.0 system is capable of controlling up to 30 loudspeakers, I connected both the 8320 and 8330 pairs up in a single network.

The GLM room-correction software in action.

Opening a new setup file in the GLM software presents you with a box containing icons for all the loudspeakers on the network and, on the right, a 7x7 grid representing your listening environment, which contains icons for the GLM 2.0 adaptor and the measurement microphone. You then drag and drop the loudspeaker icons into the grid and arrange them and the measurement microphone in an approximation of your monitor layout and listening position. The speaker that you are dragging not only displays the model number and left/right position underneath its icon, but also emits a pleasant burbling tone so that you know which physical monitor you are moving on screen. Having done that, you confirm the layout and move to creating the group that you wish to calibrate by switching off (onscreen) any loudspeakers that you wish to exclude. At this point you can also select the input source (analogue or digital), delay the audio should you need to match it to an out-of-sync video feed and, finally, name the group.

Calibration can be single-point or multi-point; in the latter case the necessary compensation is calculated from four readings within an area defined by the microphone positions during calibration — front, back and both sides. 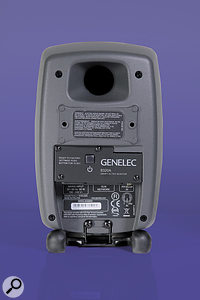 Uniquely among the range, the compact 8320A has only an analogue XLR input — the others also include digital AES3 connectivity.During the process, each loudspeaker is swept once by a sine wave at 87dB, which is pretty loud in a small space. The software then calculates and displays the room response in red, the compensating equalisation applied in blue, and the resulting corrected response in green. Any necessary inter-monitor level balancing and time delay is also calculated and applied. If a subwoofer is present in the group, an additional AutoPhase screen appears, the calibration at this stage ensuring that the output of the sub is in phase with the monitor output at the listening position. The end result of all this is that the sound from all the monitors arrives at the listening position at the same level, at the same time and frequency-compensated for the room acoustics.

Having set and calibrated a group, all its settings (including the volume level, which can be either preset at -40dB or -50dB, or adjusted with the remote volume control) are saved under a group tab.

Each setup file can contain up to five groups. This would allow you to set up, for example, groups for stereo, 2.1 and 5.1 at your listening position, plus a stereo and a 5.1 group for an artist sitting six feet behind you on a sofa. In your home or project studio, you could potentially set up groups for your mix position, off-centre at your keyboard stand and back in the room where you play a miked-up acoustic guitar, for example. Since every loudspeaker in each group has its own group-specific settings, the idea is that the sound will be consistent in every listening position.

Uncalibrated, on stands and positioned correctly in my listening room, both pairs of monitors delivered the characteristic clear, detailed, revealing Genelec sound. As you’d expect, the 8320A’s four-inch bass driver couldn’t quite match the bass extension of the 8330A’s five-inch equivalent. There’s certainly enough information in both to keep you informed of what’s happening in the bass and to allow you to make decisions. However, if I were recording and mixing tracks with a lot of bass — especially electronic bass — I’d probably want to add the matching 7350A sub.

Changing rooms to a spare bedroom with acoustic issues showed the value of the GLM 2.0 AutoCal facility. As you’ll see from the screenshots showing the response curves, AutoCal made a significant improvement to the sound at the listening position. AutoCal deploys two high-frequency shelving filters, two low-frequency shelving filters and (depending on the monitors) up to 15 fully parametric notch filters. In the case of the 8330A, seven parametric filters are available, of which six were used in tailoring the monitor response to my room. You can toggle between calibrated and uncalibrated settings and, if you’re not happy with some detail of the calibrated output, you’ll see from the screenshot that it is possible to manually edit the AutoCal filter settings.

One nice feature of the system is that the GLM 2.0 adaptor that runs the network can be powered by any USB power source, which means that, once you’ve finished calibration, you can dispense with the computer and retain full volume control operation.

When thought of simply as active monitors, the new 8320A and 8330A deliver the high level of professional performance that we’ve come to expect from Genelec. Their diminutive dimensions and low weight make them ideal for small spaces or for mobile and location recording.

Choosing monitors is an extremely personal and subjective experience and, if you have the appropriate budget, these new Genelecs should certainly be on your audition list. However, add into the equation the GLM 2.0 loudspeaker management software and the bundled GLM adaptor, measurement microphone and external volume control and you are presented with an extremely attractive package that is going to be very hard to ignore, especially if you regularly find yourself working in different environments with differing acoustics.

I was really impressed by just how easy and fast the 8330A/8320A and the GLM 2.0 software made optimising a monitoring system. I’m sure that you could achieve the same results with a computer, an audio interface, a microphone and a programme such as the Room EQ Wizard, but I’m not sure that it would be as speedy, simple and elegant a procedure as it is with GLM 2.0.

If you record or mix in different rooms often, I think that the Genelec 8320A or 8330A, together with their included accessories and GLM 2.0 software, would make your monitoring very much more predictable and replicable. If you’re home-based and your acoustics could use some improvement then, by the same token, you’ll also have something to gain. These new Genelecs are, if you’ll pardon the pun, well worth listening to.

I can’t think of any comparable system at this price that is so complete, integrated and easy to use, so, for the moment at least, Genelec are leading a one-horse race. In the hi-fi world, the Meridian 861 V8 Reference Surround Sound Controller incorporates a room-correction system that appears to operate in a similar — though seemingly much more complex — fashion. However, at £12,500, without any loudspeakers, the 861 V8 is hardly a practical alternative.