This highly affordable device is based on the circuitry used in Neve's legendary 1073. So can you really get a classic vintage preamp sound on a budget? 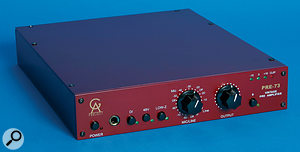 Swedish Company 'Golden Age' Audio distribute many leading pro-audio brands in their part of the world, but they also manufacture their own range of microphones and accessories aimed at the project studio market. They first came to our attention when they launched a series of low-cost ribbon mics, and now the Pre 73 preamplifier joins their 'Project' range.

Although the Pre 73 is based on the preamp section of the revered Neve 1073, it sells at an astonishingly low cost. Judging from the markings on the output transformer, at least some of the unit is built in the Far East — but that doesn't in any way detract from its performance. Utilising a discrete component signal‑path (ICs are only used in the metering section), the Pre 73 is powered from an external PSU to reduce the risk of hum being induced into the audio circuitry, which itself incorporates three separate audio transformers: one for the balanced mic input, one for the line input, and one for the output. Much of the circuitry bears a strong resemblance to that used in the Neve design, but while the components used are perfectly adequate, they're not the esoteric types found in high‑end equipment, because they would add very significantly to the cost.

This preamp conforms to the popular half‑width, 1U‑high format (so it could easily be fitted to a third‑party rack tray if necessary) and all the casework is made from heavy, folded steel, finished in a retro dark red colour.

The GA Pre 73 gives you everything that you'd expect on a good preamp, including inputs for mic, line‑level and DI signals, as well as a polarity-invert button and an LED level meter. The gain control layout borrows from the Neve 1073, with three 'off' positions, the one between the 50 and 55dB positions being for a second mic gain-stage.Conceptually, the Pre 73 is a fairly basic single‑channel mic/line preamp with a maximum gain of 80dB for the mic input and a gain range of ‑20dB to +10dB for the line input, both of which are on Neutrik Combi connectors, allowing either balanced XLRs or balanced jacks to be used. Of course, as with some other units I've tested using similar connectors, you need to be aware that if you apply phantom power to the mic input it will be applied to both the XLR and jack connector pins of the Combi mic socket — so you must take care, when connecting jacks to this input, that the phantom power is switched off! Failure to check may result in damage to the connected equipment. In most cases, though, jack feeds would go to the adjacent line‑input Combi connector (which has no phantom power) or the front‑panel instrument input.

The output is on separate jack and XLR connectors, again both balanced. The high‑impedance instrument input jack (unbalanced) on the front panel has its own selector button, and is designed mainly for use with guitars and basses fitted with passive pickups. As different mics work best running into different input impedances, the Pre 73 is also fitted with a normal/low‑impedance switch in addition to the expected power, 48V phantom‑power and polarity-invert buttons. A basic four‑stage LED signal‑level meter monitors the output, and the gain is controlled in 5dB steps from ‑10dB to +80dB using a rotary switch. I found this switch, which uses a small, retro‑style Bakelite knob, rather stiff to turn, but then it does control a three‑wafer switch mechanism and may become easier with use. The output level control is a rotary pot and allows for fine gain adjustments, with enough range to allow the user to deliberately overdrive the main gain stage and then lower the signal again at the output stage when artistic requirements make this appropriate.

Given the budget provenance of this preamp, its internal construction is quite impressive, with the bulk of the components fitted to two double‑sided glass-fibre circuit boards. The one at the rear houses the audio connectors, the stabilised power supply regulators, a fuse and the smoothing capacitors. Both input transformers are enclosed in screened cans, and the generously large output transformer, which is bolted to the side of the case, appears to be fed from a hefty power stage, built around a 2N3055 power transistor mounted on a suitable heat sink. The internal wiring is all very neat, with screened cable and locking on‑board connectors. All boards are well secured to the case via threaded pillars on the base plate, and all the push‑switches have status LEDs that protrude though holes in the front panel. In all, the quality of mechanical assembly equals that of far more costly pieces of equipment, and no obvious corners have been cut — with the possible exception of the power inlet. My only suggestion would be that a plastic clip could prevent the cable pulling out, so that might have been a worthwhile addition.

With mic preamps, spoken‑word tests and simple vocal recording often reveal a lot about the tonal signature of a circuit, and in a comparison test with one of my own relatively transparent‑sounding preamps, the Pre 73 came across as having a very obvious character. It exhibits a strong and confident‑sounding mid-range, very smooth highs and a generally 'rounded', slightly compressed‑sounding tonality, that I found reminiscent of some tube mics and tube preamps. The Focusrite ISA 110 that I reviewed a few months ago had something of a similar tonal leaning, which I attribute to the use of transformers in the audio path, although much depends on the characteristics of the particular transformer employed and the circuitry that surrounds it. At no point did circuit noise become noticeable.

If you're after absolute accuracy and transparency, this clearly isn't the preamp to choose, but as a musical tool to help ease vocals to the front of a mix without making them over‑bright in the process, the Pre 73 works really well. I haven't had enough experience with the original Neve model to be able to make a definitive comparison, but Golden Age have certainly captured an authentic‑sounding vintage vibe that can really warm up a solid‑state capacitor mic and add weight and punch to vocals. The capacity of this circuit to smooth away edginess and grittyness without actually dulling the sound also makes it a good contender for miking an electric guitar cab or DI'ing a bass. As always a DI'd bass will probably need additional help from compression and EQ, but the basic sound I achieved using the Pre 73 as a DI box was a good starting point. I also recorded a couple of guitar parts using the preamp to mic my Vox amp and got great results, but DI'd clean guitar also sounded particularly sweet through this preamp. I'd have liked a moving-coil VU meter to complete the retro vibe, but given the price, that would have been impractical.

Given the very affordable price of the Pre 73, its performance is astonishingly good, as is its build quality. Clearly, there is a limit to the quality of the transformers and other components when aiming at such a user‑friendly price, but I can't detect any serious corner‑cutting, and the aim of presenting a warm, vintage sound that's musically attractive has been met extremely well. Indeed, it's difficult to recommend anything else in this price range when it comes to 'mic amps of character' — so I don't think I'm sticking my neck out when I say that the Pre 73 is destined to sell in large quantities, recession or no recession.

There are lots of alternative transformer‑based preamps that sound wonderful, but the choice really evaporates when you come down to this price point. The more costly Focusrite ISA One, which also has that vintage vibe, and possibly the Universal Audio Solo 110 come closest, but I honestly don't think you can buy anything else for this price that sounds so 'grown up'.

As an affordable taste of vintage sound quality, the Pre 73 offers something really special within its price range. Even if you already have a good mic preamp, it is worth having something like this for those occasions when you need a track to punch a little harder or sound a little smoother.