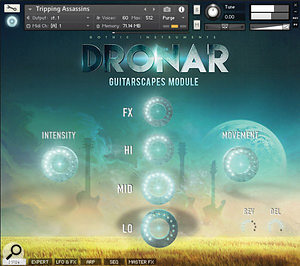 The original Dronar delivered cinematic vastness of a generally dark and serious nature. Further modules (and moods) were promised as the series progressed, and here’s the first. My god, it’s full of guitars! Guitarscapes is built on a foundation of electric and acoustic guitars, plus mandolins and pedal steels. Sometimes the sources are obvious, but more often they’re not. Either way, the addition of strums, chugs, plucks and pulses gives this instrument a different flavour and arguably a greater dynamic power than its predecessor. The arpeggiator with its step sequencer-like parameter automation was already effective for adding movement, but extra functionality has been added in the form of the Rhythm Editor. It’s a tool for re-emphasising, reordering and humanising the groove elements, and jolly useful it is too.

Guitarscapes requires just under 6GB of your hard-disk space. Its patches comprise multiple samples and — as before — you’re encouraged down the ‘less is more’ avenue. Playing between one and four notes is plenty! From this minimal input, chords, bass, highs and atmospheric effects are generated, ready to be tweaked from one of the most effective and stripped-down interfaces going. It’s worth assigning the main parameters to a few physical controls too, because Guitarscapes is at its best in performance. When you’re ready to dig deeper, the ‘Expert’ page provides a breakdown of each layer and an inkling of the potentially high voice counts incurred by some patches. Each of the four layers contains two samples, which you can blend together with a slider, although too much blending and even those basic chords can quickly descend into mush.

Over 320 presets are supplied to play, inspire and delight, so you’ll appreciate the ‘Start Here’ folder and its choice selection of the joys to come. As you saunter through the rest, the folder names give you an idea what to expect, from strummed versions of each guitar type to complete backdrops for future, replicant-menaced dystopias. The underlying samples are present in many forms including reversed and processed; they’re blended with strings, synths and sound effects and manage to never sound stale or clichéd.

I won’t pretend I’ve played every patch, because to have done so would have missed the whole point of sitting, playing, tweaking and playing some more. Overall, I felt the epic scale and sense of impending doom was nicely balanced out by elements such as shimmering tremolo guitars and airy pads. Amongst the more pleasant encounters were ‘Dapply Stream Harp’ and ‘Plinky Love’, both able demonstrations that the mood is no longer fixed at ‘sombre’. Patches such as ‘Dream Guitar’ even stray into the normal — or normalish — and the sublime ‘Peak Moment’ is now my go-to patch for euphoric endings. Lastly, at least one patch is capable of gobbling entire afternoons — ‘Infinite Guitars’ is Fripping excellent!

Other than an occasional overuse of reverb and delay (easily remedied), Guitarscapes is hard to fault. It’s another winner in my book!