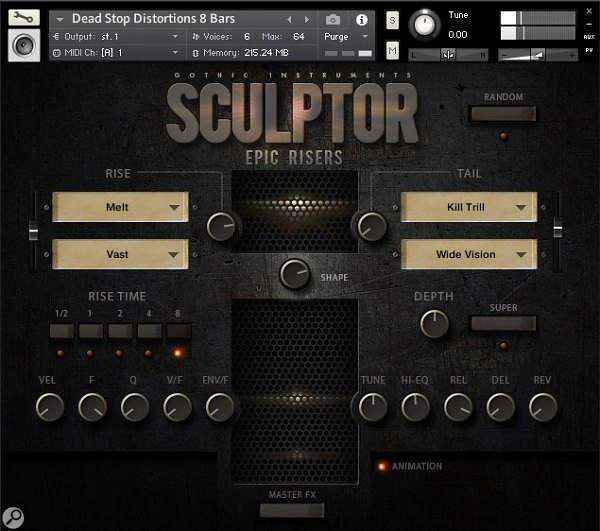 As well as their Dronar series, Gothic Instruments also offer Sculptor and, in this review, you actually get two Sculptor titles in one: Epic Risers and Epic Drops. Each of these two libraries is designed for the full version of Kontakt (v.5.6 or later) and, as the names suggest, their purpose is to provide the sorts of ‘riser’ and ‘drop’ sounds that have become firm ear-candy favourites for cinematic composers, game sound designers and music producers in various contemporary genres (EDM and hip hop, for example). These sorts of sounds make great musical punctuation, either building anticipation up to a transition (a riser) or adding impact at, and beyond, a transition (a drop; not unlike an impact sound effect but generally with a noticeable pitch drop).

These two Sculptor libraries share some common features, including the fact that individual risers or drops are built by combining multiple samples from within their respective libraries, but there are also some differences. Most obviously, the two libraries feature different UI visuals, but perhaps more notable is that, in Epic Risers, four samples are used in each sound (two forming the actual rise and a further two providing a short tail) while, in contrast, for Epic Drops, sounds are built from just two underlying samples. 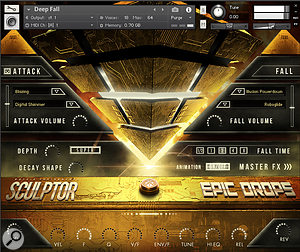 In both libraries you get all the controls required to blend the levels of these samples and you can also adjust both the length of the riser or drop (from two beats and eight bars) and its intensity. A very healthy collection of category-based presets are included and, for each preset, 15 different risers or drops are mapped across your MIDI keyboard, along with keyswitches for adjusting the riser/drop length setting. The sound design options are similar in both libraries and include envelope controls, a rather nice filter, options for velocity modulation, EQ, drive, compression, delay and reverb. Both also feature a very effective ‘gater’ effect. In short, there are plenty of ways to take the presets and the underlying samples and make them your own.

Sonically, the sounds are perhaps best suited to ‘modern’ contexts. By that I mean that these are not really organic sounds but, however they are processed by the instrument’s sound engine, the bulk of the underlying samples have a hi-tech or synth-based texture. They might not suit a costume drama horror film, but they would work great in sci-fi, a gritty urban thriller or a tech-themed computer game. My only other comment would be that there are, of course, ‘similar products available from other vendors’. Most obviously, Zero‑G’s Impact Designer, Rise Designer and Whoosh Designer) are in the same sonic territory, so GI are perhaps not breaking radical new ground here. However, both Epic Drops and Epic Rises are very competitively priced and, if sonic punctuation is a big part of your sound, well worth checking out.