Focal’s new flagship studio cans aren’t cheap — but their performance is up there with the very best of them.

Through a combination of innovative design, attractive styling and competitive pricing, Focal have grabbed a sizeable chunk of the market for studio monitor speakers. Like many other loudspeaker manufacturers, the French company have a strong presence in the consumer market, too; and as well as offering home cinema, multimedia and hi‑fi speakers, they also market headphones in many shapes and sizes, from earbuds right up to the new ‘if you have to ask, you can’t afford them’ Utopias. 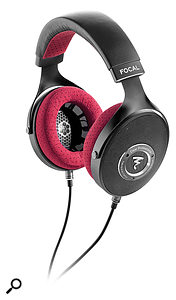 Until recently, however, Focal only made one pair of headphones targeted at studio use. Reviewed back in SOS January 2014, the Spirit Professionals boast a clean, crisp sound, are easy to drive from low‑powered sources, and offer outstanding isolation. In other words, they still have a lot to recommend them as general‑purpose studio headphones, and they’ve now been joined in the ‘Pro’ category of Focal’s product range by two more products. The Listen Professionals are lightweight closed‑back phones which occupy the same sort of price bracket as the Spirits, but the Clear Professionals, which are under review here, are much more costly open‑backed headphones, designed for critical mixing and editing tasks.

Both of the new models have counterparts in Focal’s consumer range. The hi‑fi‑oriented Clear and the studio‑focused Clear Professional models have different colour schemes and come with different accessories, but it’s not clear whether the phones themselves differ in any way. Their published specifications are identical, and both are moving‑coil designs that use an “M‑profile aluminium/magnesium dome”, which is said to provide “total dynamic respect over the entire audio spectrum”.

Both the Professionals and the standard Clears come with a lightweight moulded carrying case. Focal call this “rigid”, but although it’ll protect your Clears against everyday knocks, it wouldn’t stand much chance against an airline baggage handler in vengeance mode. It is said to contain space to store an iLok key, which would be a nice touch, except that I couldn’t find any such compartment.

As well as the case and a spare pair of ear cushions, two Y‑shaped cables are supplied: a straight one 1.2m long and a curly one of 5m. These terminate in stereo mini‑jacks with the usual 6.5mm adaptor, while at the headphone end, locking mini‑jacks attach to the bases of both earcups. The only fly in the ointment is that the left and right markings on the earcups themselves are very unclear, while those on the cables are invisible once attached. Since the headphones themselves are nearly symmetrical front‑to‑back, this makes it unnecessarily hard to figure out which way around they should go when you’re putting them on.

Focal say that the “Clear Professional headphones are so comfortable that you forget you are wearing them”. This wasn’t the case with the Spirit Professionals, but the Clears absolutely are a pleasure to wear. They feel secure yet feather‑light on the head, and I was surprised to discover that, at 450g, they actually weigh twice as much as rivals such as AKG’s K702 and Audio‑Technica’s ATH‑R70x, because they seem almost to disappear once you’ve put them on.

This sensation is, I think, only partly down to physical factors such as their 20mm memory‑foam ear cushion, perforated microfibre headband and solid aluminium yoke which “moulds to face shape”. It’s also partly an auditory effect, which results from the Clears’ unusual openness. Even more so than other open‑backed designs, these headphones seem to introduce no barrier at all between the listener and the outside world. Whether the effect quite supports Focal’s claim of “A listening experience very close to a pair of monitor speakers” is debatable, but it certainly gives said listening experience a natural quality that makes long sessions more enjoyable and less isolating. The flip side of this is that the Clear Professionals produce more spill than most open‑backed headphones, and anyone else in the room will end up sharing whatever it is you’re listening to.

With a nominal impedance of 55Ω and sensitivity quoted as 104dB SPL for 1mW at 1kHz, the Clears should present no great challenge for headphone amps, and I had no problem driving them loud from generic audio‑interface headphone sockets. The frequency response is quoted as 5Hz to 28kHz, though no tolerances are given.

Focal’s literature invites praise for the Clears’ high‑frequency detail and their bass response. In headphone manufacturer speak, this often translates as an admission that the mid‑range is recessed, but when you pay this much for a pair of headphones, you expect them to perform well across the entire frequency range! Happily, that is definitely the case here, and although I wouldn’t describe the Clears as mid‑forward, neither are they obviously or heavily ‘scooped’.

A track I sometimes use for auditioning headphones is Chris Wood’s solo recording of ‘Lord Bateman’, which is unusual in having both a ton of bottom end on Wood’s down‑tuned acoustic guitar, and a bright vocal sound that contains some pretty strong sibilants. It’s a great track, but one that stands on the edge of how far a mix engineer can push these things, and it quickly lets you know whether a monitoring system is also overdoing it in the same departments. The Clears did emphasise the sibilance a touch, suggesting that there is a gentle lift in the high‑frequency region; but the track still hung together, and the low notes came across as rich and full rather than overblown or farty. With busier material, meanwhile, the Clears had no trouble putting across deep synth basses, punchy rock drums and complex high‑frequency sounds. More to the point, they left me in no doubt when there was something wrong with the way these elements were presented in a mix.

In terms of frequency response, then, the Clear Professionals are probably as neutral as any pair of moving‑coil headphones you can buy, but that doesn’t translate to a listening experience that is boring or flat. Focal’s decision to sell the same phones into the hi‑fi and studio market is fully justified, because they are both a fine analytical tool for music makers and a high‑quality reproduction system for music connoisseurs. If you compare them with a typical pair of open‑backed phones costing a few hundred pounds, such as the AKG and Audio‑Technica models mentioned earlier, I think the Clears will display a small but definite edge in terms of, well, clarity. Whether that justifies the considerable difference in price is something only you can decide.

The Clear Professionals are pretty close to the state of the art in moving‑coil headphone design, then; but they are also pitched against rivals that are pushing the boundaries of other headphone technologies. It was interesting to compare them with flagship planar magnetic models from Audeze, whose LCD‑Xs currently retail for around the same price, because both of them make compelling showcases for the manufacturer’s chosen technologies. The Clears are very comfortable and lightweight, with a more effortless high‑frequency extension and sparkle; but the LCD‑Xs’ presentation of musical dynamics is hard to beat, as is their ability to pick apart the most congested mid‑range in forensic detail. If you’re considering this sort of investment in a pair of headphones, I’d strongly suggest auditioning both, along with flagship models from the likes of Sennheiser and Stax. The highest compliment I can pay to the Clear Professionals is that they definitely hold their own in this company.

At this price, Focal’s new flagship phones are up against some very well-regarded rivals, but they certainly have what it takes to compete on quality.