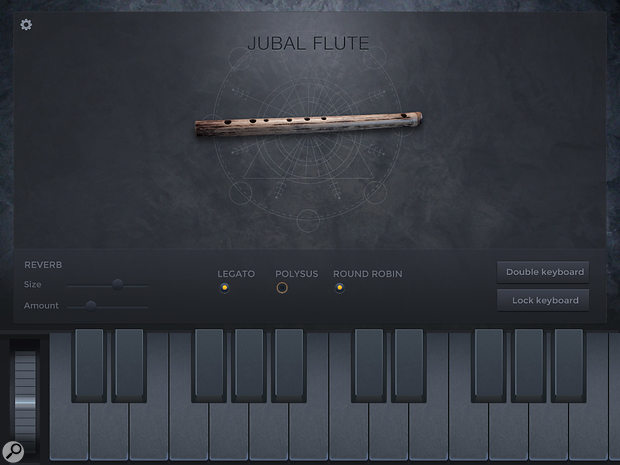 Jubal Flute’s subdued interface won’t leave you feeling out of place in a woodland glade.

Jubal Flute by Embertone is the second of their Kontakt instruments to be released in iOS guise, following Sensual Sax. Once again the company have partnered up with veteran iOS music-makers Blue Mangoo, best known for their iFretless series.

According to Embertone, the story is that the featured flute was a unique feather-light curio made from hemlock by the mysterious Jubal, who deposited it in a local music shop, and was never heard from again. But whatever its origin, the sounds fall squarely into ethereal/fantasy territory, and you’d likely get stern glances from the conductor if you tried it in an orchestral setting.

The presentation is stylish and efficient. A couple of buttons can be used to choose between ‘true legato’ mode, in which a monophonic melody line can be played with natural-sounding changes, or ‘polysus’ for playing chords. A third button enables round robins for subtle variations between repeated notes.

A couple of sliders set the reverb size and amount, while the lower part of the display provides a keyboard with a slightly unusual arrangement. When pressing one note at a time, it’s possible to hold it down and drag the keyboard left or right to reach a different octave. Alternatively, a lock button can be used to fix it in place, which then enables polyphonic playing.

A double keyboard button provides additional flexibility by adding a second row of keys. This allows you to play legato lines on one while adding chords or a second legato line with the other.

The MIDI settings page can be used to configure input/output channels and controller assignments for polysus/legato, volume, reverb amount/time, and sustain pedal. The ability to assign continuous control over volume is a big plus when using a breath controller, allowing you to swell and fade notes expressively, and it was fun trying it out with an Akai EWI.

Jubal Flute requires iOS 9.0 or later, and supports IAA/Audiobus/AU. The app has a certain simplicity and quaintness to it, the notes developing with a natural, uneven vibrato and just the right amount of breath noise. It also has quite a generous range of six octaves, as well as being the only flute I’ve seen advertised with ‘conjures elven magic’ as a bullet point. On that basis, it gets a thumbs-up from me.