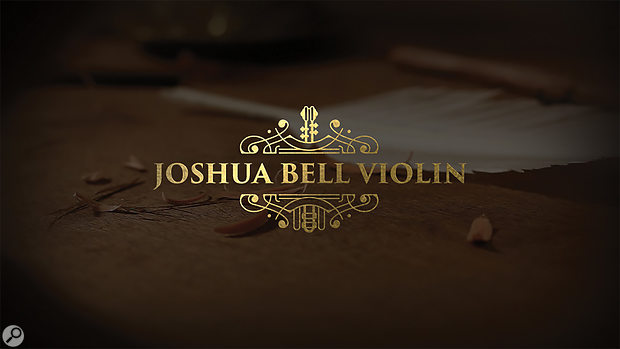 A collaboration between eminent American violinist Joshua Bell and the small but perfectly formed Embertone company, this excellent library features a deeply sampled solo violin expressively played by the maestro himself. Recordings took place over two days at New York’s Avatar Studios, yielding nearly 20,000 samples in a diverse range of styles; all the performance variations are packed into a single playable patch, saving you the trouble of wading through encyclopaedic listings to find the articulation you need. The library runs on the free Kontakt Player and the full version of Kontakt 5.6.8 or higher, and uses 8.24GB of disk space once installed. A legacy Kontakt full 5.4.1+ version is also available.

Building on techniques developed for Embertone’s previous solo strings (which include Friedlander Violin and Fischer Viola, reviewed here in May 2016), the company’s new solo violin is an unmitigated triumph. Rarely have I heard such subtlety and tenderness in a sampled instrument: the player’s breathy quiet notes are a thing of beauty, and his natural note transitions and glides are perfectly realised by an ultra-realistic, supremely organic true legato mode. I was pleased to find the programmers have adopted the superior VSL legato style in which a held note is retriggered when a superimposed note is released, making it easy to play the fast trills and gracings which characterise expressive violin performance.

Though this wonderful instrument has a lot going on under the bonnet, once it’s downloaded, installed and activated you can jump in and play it straight out of the box. A predictive programming script unobtrusively selects the appropriate articulation on the fly — for example, detached playing triggers a bow change on each new note — while overlapped notes produce a smooth-sounding legato slur. Putting it another way, it plays like a dream, and though a small lag is sometimes noticeable while the script figures out what’s going on, the violin will keep pace with the fastest performances you can throw at it. As is normally the case, the legato mode is monophonic, but you can render the instrument polyphonic (though still maintaining true legato transitions) at the touch of a button.

A large articulation menu includes all the common violin playing techniques, and more besides: a brilliant set of ethereal legato harmonics caught my ear, and I was impressed by the accurate tuning of the tone trills — but then the tuning is exquisite throughout. Played with and without vibrato, the looped sustains are played at four dynamics in normal, con sordino (modelled on the sordino tone of Joshua Bell’s violin), sul ponticello and sul tasto styles, the lovely, elegant portamento slides kick in when you play quiet overlapped notes, while the pizzicatos bang out a rousing ‘Bartok snap’ at high velocities. In addition, there are played swells and diminuendos, note repetitions and ricochets, though no col legnos. Long notes are played with and without vibrato, with vibrato depth controlled by a slider; you can use the mod wheel to introduce the violinist’s expressive real-life vibrato, or use Embertone’s thoroughly convincing scripted version.

In order to access all these articulations within a single patch, the makers provide an elaborate set of keyswitches. There are three types: a conventional latching keyswitch which simply selects a style, a momentary keyswitch which is only active while you hold down its key (useful for inserting a quick played trill or slide), and the ‘instant keyswitch’, which automatically sounds an articulation and reverts upon release. This last is a fun way of triggering (as opposed to actually playing) trills and tremolo, and opens the door to creating rhythmic effects such as an eighth-note oscillation between straight notes and harmonics. The keyswitch types are respectively colour-coded red, yellow and green on the GUI with blue keys showing the violin’s G3 to G7 playing range, resulting in a somewhat brain-boggling keyboard colour scheme.

The violin’s rich, mellow timbre can be brightened, darkened or further warmed up with preset tone settings; you can play it completely dry, or use one of the built-in convolution IR impulses for various acoustic spaces, which include classy concert halls and an amazing big, spacious cathedral reverb. Though this is one of the most tastefully designed interfaces I’ve seen, it wasn’t a good idea to make the reverb dial a dark shade of grey over the black background — using it is like trying to find the light switch in a darkened room at midnight.

Delving deeper into the interior, we encounter features which will gladden the heart of a small minority of hardened tweakheads, while scaring the pants off people who just want to play a sampled violin and have done with it (in terms of real-life music-making, I’d place myself firmly in the latter category). Embertone admit the level of detail is insane, but justify it by saying they want the instrument to be as user-customisable as possible. To that end, A so-called ‘intuition page’ offers humanisation and randomisation controls with almost psychic powers, while the control page allows users to assign various controllers and keyswitches to articulations, legato styles, dynamics and vibrato. If (or rather, when) you mess things up, a ‘reset’ button restores everything to the default settings.

Joshua Bell performed the samples on his 1713 Stradivarius. Known as one of the world’s great violins, this famous fiddle has a chequered history: it was stolen twice from the same owner in the 1900s and wrangled over in the courts before ending up in the arms of Mr Bell, who became smitten after playing it at a concert. Declaring it “the most amazing-sounding violin I’d ever heard”, the violinist is reported to have paid around four million dollars for it — that’s real love! The chances are you won’t find a comparable instrument on eBay any time soon, so from that point of view, being able to play a beautiful, detailed sampled version in your own home for a couple of hundred bucks seems like a hell of a bargain.