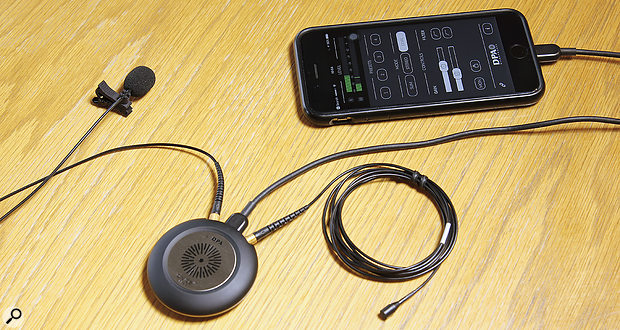 DPA’s iOS-friendly interface and mic set is aimed squarely at broadcasters and interviewers who need the very best audio quality.

Danish Pro Audio, or DPA Microphones as they are more commonly known, need no introduction. Their new d:vice is a compact two-channel (input only) audio interface enabling any DPA mic that terminates in a MicroDot connector, and is intended for making high-quality recordings directly into an iOS phone or tablet, or into a Mac or Windows computer, using pretty much any third-party recording software. It is also possible to use DPA’s d:dicate range of recording microphones, with the optional MMP-G preamp. It would seem that broadcasters and interviewers are the primary target, though practical applications extend to anywhere that high-quality recordings need to be made on location or on the move. Power comes from the connected device, and the current draw is approximately 100mA.

With a quoted noise floor of -114dBFS, the d:vice can run at sample rates of up to 96kHz with 24-bit resolution. The frequency response is flat within ±0.2dB from 20Hz to 22kHz, with the THD (distortion) figure bettering 0.001 percent at 10dB below maximum level.

The d:vice comes in a number of bundles that include various DPA microphones. Our review system came with a pair of SC4060 omnidirectional lapel microphones — the ‘Double Lavalier’ VIDMK-4060-S kit — but other sets include a headset mic, a 4080 cardioid lavalier mic, or combinations of these. Each lavalier mic comes with an ingenious clip, into which the mic can be mounted either horizontally or vertically (meaning it will work equally well attached to a shirt collar, tie or T-shirt), as well as a foam windshield and two removable grilles. The ‘default’ grille (which is pre-fitted) adds a 3dB HF boost between 8-20 kHz; another adds a 10dB boost around 12kHz (which DPA recommend for when the mic is chest-mounted). With neither grille fitted, the mic’s response is nominally flat, but exposed to the elements and therefore unprotected against dirt and moisture.

Included with the kit is a Micro USB-B to iOS Lightning cable, a Micro USB-B to USB-A cable, and foam windshields for the mics, all packed in a semi-rigid zip-up storage case. While DPA suggest that the d:vice can be used with any iOS phone or tablet, the reality is that only later iOS devices (iPhone 5 and above) equipped with a Lightning connector and running iOS 10 or later are supported. When connected to a computer, the d:vice is recognised as a class-compliant USB audio device that works without drivers. The d:vice itself is around two inches in diameter and less than half an inch deep, making it practical to tuck it in a pocket along with an iPhone for location recording.

DPA provide a free app, available from the Apple App Store, that provides control of the preamps as well as the ability to save gain, mode and low-cut filter settings in up to four presets. However, it’s worth noting that the app doesn’t actually record — you need to use a third-party app such as GarageBand to capture audio. There are no physical controls on the d:vice, so although you can just plug it in and it will work with the levels set in the right ball-park for lapel/speech work, you need to use the app’s Gain slider to adjust the input levels. Level meters on the app screen, divided into green, amber and red areas, monitor the input levels.

The switchable low-cut filter comes in at 80Hz with a 12dB/octave slope and should be used for speech recording or when rumbles or traffic noise are present. An on-screen Mon button sends audio via your iOS device or computer’s headphone output for monitoring purposes. A Lock button stops any third-party software from changing your gain or HPF settings — which would be really handy for use with video-recording apps that have an auto-gain feature that can’t be switched off. All of these settings are retained when powering down the d:vice.

The two inputs can be used to make stereo recordings, but when only one mic is connected, the app automatically switches to Mono mode. It is also possible to sum the two mic inputs to mono if necessary, which would be very useful if you wanted to upload an interview, say, directly from your iOS device. In Stereo mode a single gain fader controls both channels. In Dual mode, each channel has separate controls. Presets are saved by pushing one of the numbered preset buttons for three seconds. A short push on a preset button recalls the saved preset.

Because there are no controls on the d:vice itself, you do need to switch between the d:vice app (to set the gains) and whatever app you choose to record into (to capture audio). However, since most iOS recording apps don’t allow you to set up stereo channels with different left and right input gains, the app-controlled nature of the d:vice does present an advantage in that respect, as does its ability to save and recall presets.

There’s no doubt that the d:vice is a very professional piece of kit, and its compact form factor makes it a very practical proposition for field work — though it also comes at a very professional price. That said, the audio quality is exemplary, it partnered perfectly with the lavalier mics provided, and is also compatible with all of DPA’s other excellent mic offerings.

There are a great many different iOS recording solutions around — Rode, for example, make a lavalier mic for smartphones, as well as an X-Y mic for iPhones and iPads, and companies like IK Multimedia and iConnectivity offer numerous iOS-compatible audio interfaces, to which you can connect your own microphones. However, none offer the combination of quality and portability that the d:vice boasts.

A premium compact mobile recording solution that offers connectivity with a number of DPA’s excellent recording microphones, as well as exemplary audio performance.