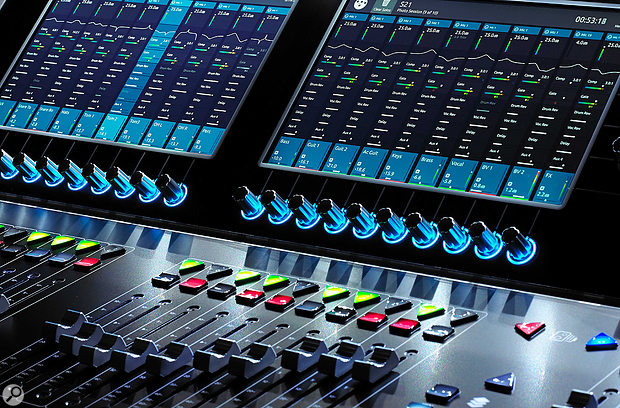 In the S21, DiGiCo have made their world-class digital mixing technology more accessible than ever before. We spent some time with it, both at DiGiCo HQ and at a real live event.

For many independent live-sound practitioners, owning a digital mixer from the DiGiCo range has always been firmly in wish-list territory. The S‑Series models changed all that, with the S21 and S31 — two seriously ‘pro’ consoles — putting this famous brand within the reach of us ordinary mortals.

DiGiCo were formed in 2002 with the purchase of Soundtracs — a company founded in the early 1980s by a group of recording engineers wanting to develop a better studio console than what was currently available. That led to some 20 years of successful analogue designs and their first development of a digital mixing console back in 1992. Since 2000, Soundtracs’ product range had been based entirely on digital audio, and they gained a reputation for the exploration and development of many new technologies; they are particularly known for their integration of FPGA-based ‘Stealth Digital Processing’, for introducing TFT LCD touchscreens as standard on their surfaces, and their use of 96kHz sample rates.

The first DiGiCo-branded product was the D5 digital mixer system, and the D-Series product line has grown over the years. Their SD-Series consoles significantly raised the bar in terms of processing power (something like eight times the power of the already powerful D5), and currently includes models to which many engineers have aspired but which have perhaps only been within financial reach of serious professional clients. I have consistently put ‘SD9’ on my Christmas and birthday lists but, sadly, with no positive result to date...

However, here’s the thing: a couple of years back DiGiCo decided to break completely new ground with the release of the S‑Series, using new processing designs to make the famous DiGiCo brand available at a previously unheard-of price. Using the same audio algorithms found in the SD consoles, the S21 and S31 use lower-cost FPGA components and a new control processor to deliver all that DiGiCo performance for, to put it bluntly, a lot less money.

Is It For Real?

There’s an old adage that one seldom gets something for nothing, and in my experience this holds just as true when buying audio gear as for anything else. This is where you have to get your hands on the S21 to check out what all the fuss is about (or the S31 if you need more faders; we’ll just refer to the S21 for now).

Appearance-wise, the S21 is more than a little reminiscent of the SD7, having the same angled surface, solid-looking aluminium surround, iconic LED lighting bar and large screens, but can it really do the proper business at such a remarkable price? If the general buzz, chat and feedback is anything to go by, the answer is definitely a big ‘yes’, and there are those who might say that the S21 workflow and flexibility, being, of course, a bang-up-to-date design, offers a comparable level of operational flexibility to some of its distinguished and more established stablemates, while bringing a few new tricks to the party too.

The DiGiCo S21 surface is laid out in two side-by-side main sections, providing direct hands-on control of up to 48 mono or stereo input channels, the master bus, 16 busses in mono or stereo, 10 VCAs and a 10x8 matrix router. Each of the two surface control sections has a bank of 10 fully assignable motorised faders and a huge TFT LCD display that hosts 10 further sets of assignable on-screen channel controls, physically aligned, and very much integrated with, the channel strips. The twin screens dominate the upper part of the surface, which is sharply canted upward (in a very similar way to the SD7) and affords excellent visibility and physical access for both screens and controls. There’s absolutely no mistaking the S21, this is one shape and style that stands out.

Over on the right-hand side sits the master fader, the master LED meter, a group of assignable variable-function encoders with push-switches, and the main navigation and display controls to get you whizzing around the system. Overall the surface is uncluttered and clean-looking, and because the physical controls change function depending on what you’re doing at the time, there are enough to do the job while keeping a clean, minimalist look.

On top of this, the encoders use the ‘HTL’ design — this stands for ‘Hidden Til Lit’ — which means that at any time, any encoder which is operational will be lit (in an appropriate colour and linked to the screen if necessary) and any others will be unlit and therefore appear ‘greyed out’ so that they don’t add to visual clutter. This makes it easier to lay your hands straight on the control you need. The whole surface is easy to navigate after only a short time behind it, and the tight integration between screens and controls is extremely effective and easy on the eye over long periods.

In terms of local ins and outs, the S21 rear panel is equipped with 24 inputs and 12 line outputs. The mic preamps are the same as those found in the DiGiCo D-Rack, in other words the same as those used in any current DiGiCo rig using the remote digital head modules. This is good compatibility and is presumably a plus point for any outfit considering the addition of S‑Series consoles to its existing SD-Series inventory.

Connections on the S21 include 24 mic/line inputs, 12 analogue outputs, AES and word-clock I/O, Ethernet ports for connecting to various DiGiCo peripherals (including the remote-control D-Rack preamp/stagebox), and a DVI port for connecting an external monitor. There are also two DMI card slots, which can be fitted with various I/O expansion modules.

Here on the rear we also find two DMI slots for installing various option cards, including the recently released DMI-MIC card that adds eight additional mic preamps via a D-sub connector, right there on the console. There are currently no fewer than 10 DMI cards available, including MADI, Dante, Aviom, HYDRA, AES, A-D/D-A converters and — referenced later in this piece — the DMI Waves card that provides 64 input and output streams to the Waves SoundGrid system. The user manual makes the point (in red type) that the DMI cards are not hot-swappable items, and the console must be powered down before removing or inserting them.

Above the DMI slots are the usual Ethernet connectors for the D-Rack and other peripherals. This section also contains the main AES, word-clock and USB access points. I love the fact that there’s also a full-size DVI output for connecting an external screen to mirror what’s being displayed on the right-hand internal monitor.

One thing that comes across strongly in the manufacturer’s information is that the S21’s processing power is always fully available, no matter what system resources are in play, and a great example of this is that all the input channels can be run as stereo or mono without having to sacrifice channel count or performance.

Getting To Know You

I arranged to visit DiGiCo at their Surrey headquarters, where they kindly took the time to show me the S21 and demo the main features. First impressions are important, in my view, and the first time I met the S21 I was straight away drawn to its appearance. The aesthetics, build quality, look and feel (and, let’s be honest, the big ‘DiGiCo’ logo on the side) all contribute to the ‘how much do I want to get my hands on it’ score, which in this case was pretty high as soon as I walked into the demo room.

The S21 was sitting in between an S31 and an SD9; this was interesting as I had previously harboured serious designs on owning the latter with its striking red bumpers. However, after getting over the initial feelings of arriving in mixer heaven I felt more intrigued by the compact, more upright stance of the S21 and was keen to start touching and twiddling.

A comprehensive tour of the main layout and functionality of the console lasted around an hour, and the reason these models have become so popular was quickly apparent — you can work them virtually any way you want, and the capabilities and options go way beyond what you’d expect at this kind of price. The fader layers are completely customisable in that you can have any control channel anywhere you like, and getting them there is as easy as dragging and letting go, possibly making use of the auto-complete function to speed things up even more.

The controls, although few in number, perform a multiplicity of tasks depending on what the screen is displaying at the time. I found that the best way to figure out what the physical controls did was to look at the screen and simply ‘feel the force’ by trusting that the DiGiCo designers (obviously Jedi) had programmed exactly what was needed onto the controls in any display mode. There were only a few times that I tried to press a knob expecting something to happen and then finding that it didn’t, and generally, once I investigated a bit further I’d find that it wasn’t the best way to access the parameter I wanted anyway, if you follow my meaning. 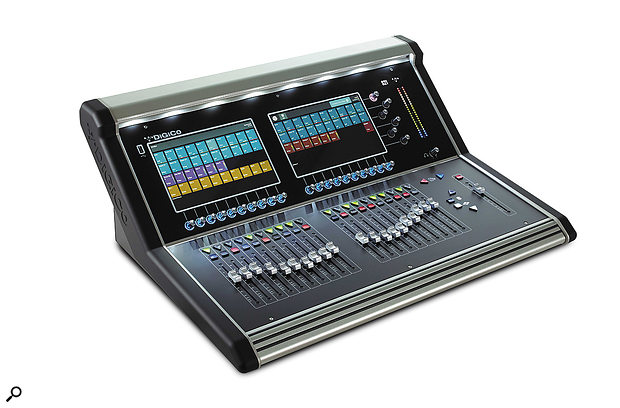 The twin multi-touch TFT screens provide most of the visual feedback, and are responsive to all the usual pinch/drag/swipe touchscreen gestures.

The surface design is, at least in terms of physical control knobs, just about as minimalist as they come. The large screens are where your eyes need to be, as everything relevant to the current operation will be displayed right there or directly alongside, and the controls will, if needed, change function and colour to suit the display (you can do almost everything direct from the screen).

It’s not only the surface layout that impresses on the S21, the entire package has a very solid, beautifully engineered feel to it. The standard of design and construction is obviously high, and there are quality touches everywhere you look — from the smooth aluminium extruded surrounds, comfortable front edge rest, and matt black polycarbonate surface finish to the excellent built-in LED light strip right across the top of the console, this is one attractive and inviting piece of kit. It’s compact and solid but not particularly heavy — an easy one-person carry — and there’s a superb ‘drive-in’ flight case available.

The complete functionality of the S21 is something that the excellent user manual covers very well, so I won’t attempt to reproduce it here as it’s freely available from the DiGiCo web site and is a definite recommended bedtime read for anyone who wants to explore the capabilities of the console in more depth, or to explore the finer technical detail. There are, however, some stand-out features that just have to be mentioned, even briefly, and if I skip the one you’re most interested then my apologies, but all you need to know is on the web site.