Digico's latest product should appeal to anyone wanting to achieve high channel counts in music-production facilities, as it enables you to add up to 48 channels of MADI-format digital I/O to a Mac or PC via USB.

Digico isn't a name you hear talked about very frequently in music-production circles, although they are well established and respected in the broadcast and live-sound sectors. However, one of their latest products should appeal to those wanting to achieve high channel counts in music-production facilities, as it enables you to add up to 48 channels of MADI-format digital I/O to a Mac or PC via USB. I can see many people finding that useful, as I'm seeing increasing numbers of MADI-equipped converters and mixers coming through SOS Towers, and prices seem to be coming down — yet if you just need a simple way of hooking up a laptop to such a MADI system, the options are few and far between. And if you want a compact device that does that, then you currently have a choice of one... 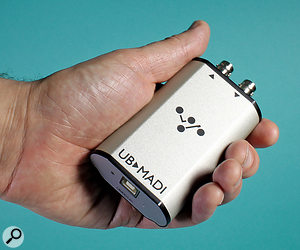 The Digico UB MADI is a simple, no-frills USB-to-MADI converter, which connects to either Macs (running OS 10.7.4 onwards) or Windows 7 PCs via USB2. The USB2 socket — through which the unit also draws its power — is on one end of this robust device, and the MADI outputs and inputs are presented and received via a pair of coaxial connectors at the other. Any AES10-compatible device that uses this connection format should work, but the UB MADI only supports up to 48 inputs and outputs at 48kHz. This channel-count limitation is a consequence of the limited bandwidth of the USB2 format. It's understandable that Digico chose to use USB2, though, as there are many computers in service that can't currently make use of USB3. It would have been nice to be able to select your 48 channels from any of the 56 or 64 being presented at the input, but at present you can only access the first 48 channels. However, Digico tell me that their own consoles will soon provide the engineer with the ability to map any stage rack or local input to any of the 48 MADI channels. The UB MADI can also accept AES3 stereo and word-clock signals.

Installation on my Windows 7 64-bit system was simple and speedy; the drivers are supplied on a wafer-thin 4GB USB drive, and a suitable USB cable is provided. Digico's ASIO driver appeared in my DAW (Cubase 7 64-bit) without a hitch, and with all 48 channels of I/O present for selection. There is, however, no mixer utility, akin to RME's TotalMix or MOTU's CueMix. With no external input connected, the UB MADI clocks its output to its own internal clock, but when a MADI, AES3 or word clock is detected, this is automatically used as the system clock. Latency, of course, is system-dependent, with different converters affecting the round-trip latency, but I detected no problems with (in)stability or clocking during my tests.

It's worth pointing out that if you're trying to get 48 channels of audio in and out of your computer via USB, it's a good idea to give this interface its own USB port, rather than sharing with hard drives, computer keyboards, mice and so on. You'll also need a computer and hard drives that are up to the task of reading and writing that much audio data simultaneously. That's not a problem for most modern systems with dedicated audio drives, but some older systems may prove more problematic, as may reading or writing to a system drive. (That, of course, is a universal problem with computer recording, not with the UB MADI itself!)

Given that this product is aimed squarely at the professional market, and that it's the first dedicated USB MADI interface on the market, it's no surprise that it isn't exactly 'cheap'. The UB MADI has no A-D or D-A conversion built in, yet for a little over twice the price, the Antelope Audio Orion 32 offers the choice of MADI or 32-channel analogue I/O. There's also no provision for optical MADI connectivity, meaning that you can't use the UB MADI with, for example, the Ferrofish A16 Ultra MkII (currently the most affordable analogue-to-MADI converter) or other such devices without investing in an optical-to-coaxial converter. Digico do offer interfaces with both optical and coaxial connectors, but they're more expensive.

However, if you already own, or have access to, a MADI system, the UB MADI is a really useful option, and should appeal to anyone wanting to hook a laptop into an existing MADI system, whether in a studio or a venue. Just before we went to press, RME announced a couple of new USB MADI systems that offer a little more functionality. They're a little bulkier, but still very portable, and although the prices are yet to be announced, they look like they'll provide some keen competition for Digico's natty little gadget. But for the moment, the UB MADI does something that nothing else does for the same money. It's the most compact and portable device I can imagine doing it, and for that reason I'm sure it will have genuine appeal for many.