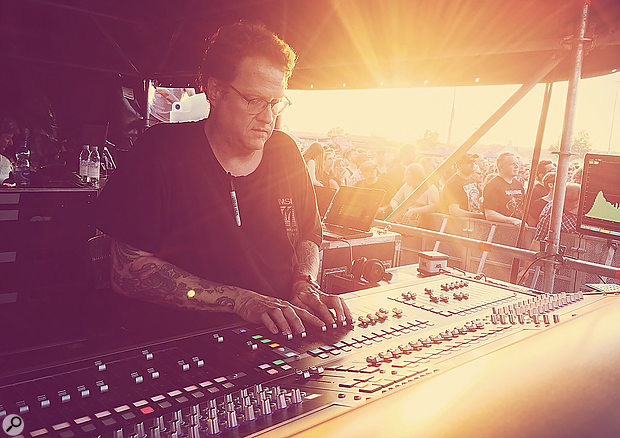 Pooch's career has seen him mix front-of-house for artists as diverse as Iron Maiden and Justin Bieber. But just how different are mixing for pop and metal?

Musically, Justin Bieber and Iron Maiden are worlds apart from one another, as are acts like Jay‑Z, Whitney Houston, Linkin Park and Kiss, but Ken 'Pooch' Van Druten has been FOH engineer for them all, somehow managing to please rock and metal audiences, as well as those whose tastes are unequivocally pop. No doubt some Iron Maiden fans would be shocked to learn that for many years, their favourite band's live sound has been delivered to them by the skilled hands of someone who is just as comfortable mixing Justin Bieber concerts, but Pooch has found that the tools needed for both styles are virtually the same, and the lessons he has learned from one genre are actually of benefit when working on the other.

"I've learned from both genres for sure," insists Pooch. "I learned managing low–end and sub information from doing pop acts and actually took that knowledge and applied it to rock acts. And rock guitar solos have helped me make keyboard solos for pop acts sound better. The tools that I've used in both genres have also helped me to operate in both places. Glossy pop vocal is all about getting expansion and compression just right so that the vocal sits in that pocket that entire time. I tend to let a rock vocal be a little bit more dynamic, but I tend to use the same plug-ins in both situations to get the final result. They are two completely different worlds, but I work similarly in both.

"I am super lucky because there are a lot of guys that get pigeonholed into a specific kind of music and if I only had the opportunity to do pop stuff I would start getting a little bored. What happened is that early on in my career I got opportunities to work with major artists in both genres. I went straight from doing a Whitney Houston tour to a Kiss tour, so in my resume there has always been this weird dichotomy of rock and pop, and because of that I get offered both types of gigs." 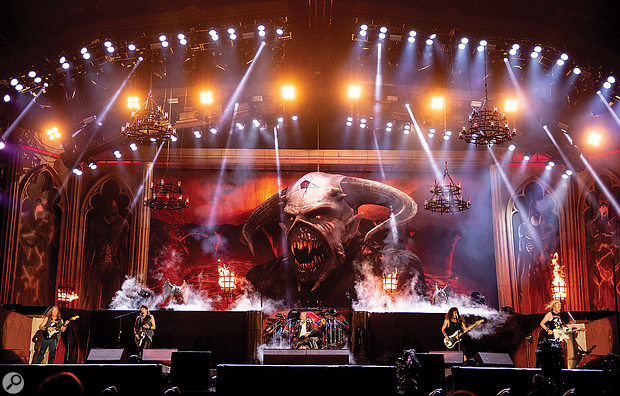 From Studio To Stage

At the start of Pooch's professional career, he worked as a studio engineer and producer, and it was only by chance that he found himself moving into live sound, which he has remained focused on ever since.

"I was working with a hair-metal band called Warrant when they had a bunch of hits in the late '80s and early '90s," recalls Pooch. "I was in the studio working on one of their demos when they said, 'We fired our FOH guy yesterday, how would you like to mix our live sound?'

"I'd played live as a musician but hadn't ever mixed anything live, not even in a club or at school, but I just went 'OK, cool!' Literally the next day I found myself at an arena mixing for 14,000 people. I immediately fell in love with it. It was the instant gratification you get when you push a guitar solo and 10,000 people scream for that solo. You are a part of that.

"At that time in studios it was all tape so there was a lot of punching in the same guitar parts. I'd literally be spending 18 hours a day for two days punching the same eight bars of a guitar, all inside a building with no windows! So I was getting tired of that. Also it was a time when rap was starting to become prominent and a lot of what I was working on in the studio didn't interest me. So those things combined to push me into live sound and I've never looked back.

"I stuck with Warrant for four years, but along with that I started working with similar artists of that era, like Vince Neil, Slaughter and FireHouse. I think the knowledge that I had from being a producer and recording engineer helped me to be the live sound engineer that I was and get to where those guys were liking what I was doing.

"Back then we were literally high-fiving if you could hear the vocal, going 'Man, that was the best show ever!' But nowadays speaker technology is so good, it's like mixing on nearfield monitors. It's all come full circle for me because being a live sound engineer today is akin to being a studio engineer in that regard."

Tool For The Job

One aspect of Pooch's job is choosing the best equipment possible for the type of show and size of venue. However, budget and transport constraints often mean that certain compromises have to be made.

"Just like all things in life, you shoot for the Ferrari but you end up driving somewhat of a lesser car in the end!" laughs Pooch. "I realise that I am very lucky to be working with artists that allow me to choose top-quality gear and are willing to pay for it, so I try to choose things that are appropriate for the band. But if I'm doing a club gig or something small like that, I scale things accordingly. I have some preferences for manufacturers and these days I use DiGiCo a lot. On a large–scale gig like Justin Bieber or Iron Maiden I'll use a DiGiCo SD7. In contrast, a few years ago I was doing a Prophets Of Rage gig, which is Rage Against The Machine but with different singers, and it was in clubs and theatres, so I used lesser DiGiCo consoles like SD9s and SD8s. So I stick with manufacturers that I prefer,...