This collection of over 11GB of 24-bit WAV files was created by utilising the presets inside Gothic Instruments’ Sculptor Massive Whooshes Kontakt instrument and then saving the results as separate audio file sets. The full Kontakt instrument version provides control over which sounds make up the three stages of whoosh — build-up, hit and decay — and over their timings and other parameters. That’s fine if you need detailed control, but if you’re just looking for a vast collection of whooshes, which you can still tweak via envelope shaping and filtering in your own sample player, then this audio collection gives you plenty to go at about a third of the price of the Kontakt instrument. 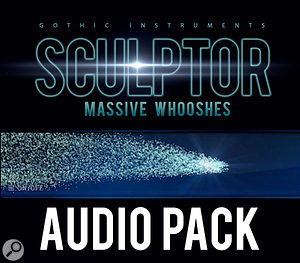 Massive Whooshes was created by film sound designer Alessandro Camnasio, who has made good use of granular synthesis, convolution, morphing and re-synthesis in building up these sonic textures. He’s also employed elaborate processing chains and some of the sounds include a little Doppler shift to emphasise the sense of movement — a nice touch.

The audio sound files are grouped by name and ready to drop into any sample player. I used Logic Pro X’s EXS24 for this review and I managed to drag in and name each sample set in under a minute apiece.

With both 44.1 and 48 kHz sampled versions, each sound set comes with several variations in attack time and duration. There are ‘fly-by’ style whooshes, slow build-up whooshes and others that sound like breaking waves or rolling thunder. There are also sound menu sets with different sound effects allocated to each key, speeded up versions and gated versions, the latter having a chopped ‘helicopter’ feel about them.

Each sound set provides a number of variations on the basic whoosh effect so that if you are using them in a film, you don’t hear the same sound effect repeating over and over again. While most of the whooshes with similar envelopes have an overall common feel, the tonal makeup of each sound type varies enormously, some being very organic, others being overtly electronic.

The original sound sources include drum rolls, animal noises, scraping noises, cymbals, fire and natural sounds, but the degree of processing hides their true identity in just about every instance. If you need the sounds of dragon breath, alien transport vessels, futuristic racing cars, methane waves breaking on some lonely frozen planet or sci-fi battle sounds, there’s plenty to work with. Less so for the musician maybe, though some of the sounds could be shaped into interesting hits or breaks.