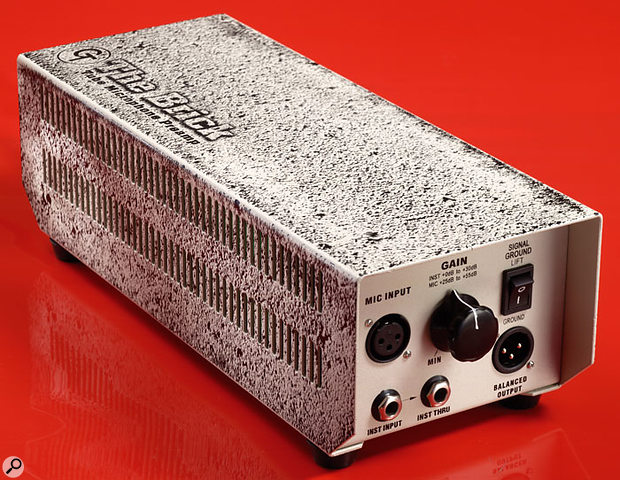 Well, it looks and feels as solid as a brick, hence the name. But there's more to this tube-based preamp than the gimmick.

As their company name suggests, Groove Tubes specialise in tube-based audio products — now mainly microphones and preamps, although the company also build some very tasty boutique guitar amplifiers and novel speaker systems. What they've attempted to do with the aptly-named Brick is to bring some of their high-end values to an affordable tube preamp that will appeal to the more serious project studio owner. However, there's a fair bit more to the Brick than just being a mic preamp, as it also has some practical DI and line-driving applications.

As a mic preamp, The Brick can handle anything from capacitor mics that require phantom power to less sensitive dynamic and ribbon mics, with an available gain range of 25 to 55dB, The circuitry, much of which is derived from the much more expensive Vipre preamp, features three tube stages plus a transformer-balanced (floating) output stage that claims to be able to drive cable runs in excess of 1000 feet (I'm afraid I didn't have enough cable to test that particular claim!).

The Brick doubles as a high input impedance instrument DI box with up to 30dB of gain, that is suitable for both studio and live-sound applications. It can handle guitars and basses, which is useful if you want to use software modelling to shape the sound after recording, and it works well with keyboards too, albeit in mono. There's also an instrument Thru connection, so you can take a DI feed without interrupting the connection between the instrument and its usual amplifier. Groove Tubes even recommend the Brick as a balanced line driver following a stage effects pedalboard, or even a digital guitar preamp.

For direct recording, the tube circuitry within the Brick can also add a degree of tonal warmth, which may be attractive to those using digital products as a sound source. Some players also plug DI boxes into the effects return socket of their guitar amps, to create ultra-sweet clean tones in the studio and, again, The Brick will be ideal for this application. 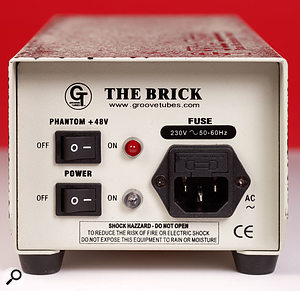 Having hopefully whetted your appetite, let's look at what exactly is inside the Brick. We know it's a mic amp and DI box combined, but what sets it apart from simpler units is the use of an all-tube signal path circuitry plus transformers for the input and output stages, to create that classic tube warmth. At the same time, this warmth is allowed to occur naturally rather than being 'forced' by overdriving the tubes or running them at low voltages. There are three tube stages in all, the first used in conjunction with an input transformer to create the input stage of the mic preamp with 25dB of gain. When the DI input is used, the first tube is bypassed, leaving two tube stages to provide the gain. Because of the output transformer, the output is truly floating when the front-panel ground-lift switch (which isolates the signal ground from the mains ground) is activated.

The reason why this thing is called the Brick isn't hard to understand — that's exactly what it looks like, and it weighs about the same. Its all-metal construction is rugged and offers good screening, and power comes from the mains, rather than an inconvenient adaptor. The mains inlet and switches for the mains power and phantom power are on the back panel (as are the status LEDs) while the front panel is dominated by a retro-style pointer gain knob, the ground-lift switch and four sockets. A standard three-pin XLR is used for the mic input, with a quarter-inch, unbalanced jack for the high-impedance instrument input, and another for the instrument Thru, which is hard wired to the instrument input. A further balanced XLR handles the main balanced output. There's no metering — the intention is that you can monitor the levels on the meters in your recording device, but I would have found a clip LED reassuring. 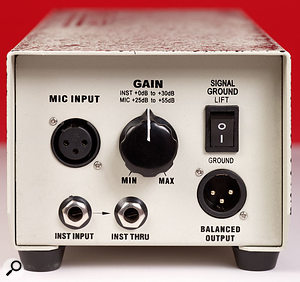 The Brick's somewhat utilitarian appearance is complemented by a simple control set and an "easygoing" classic tube sound.

Internally, the construction is nothing if not solid, with good-quality components and generously specified transformers. A vertical circuit board running down the left-hand side of the case holds most of the components and the power supply is at the rear of the case, well away from the sensitive preamp circuitry. The equivalent input noise is quoted as -90dB and the audio bandwidth is from 6Hz to 22kHz (+0/-3dB) at minimum gain.

I checked out the Brick in my own studio with a variety of sources, including a Line 6 Variax guitar and an assortment of microphones. Personally, I don't think the Variax sounds obviously digital anyway but the Brick certainly suited it well, giving it a warm and lively sound when DI'd. Somehow the Brick avoids that brittle high end that some DI solutions produce, and the same is true when using it as a mic preamp with solid-state capacitor microphones, where the top end again seems very smooth, and the lower mid range just a hint more dense. The combined effect is very similar to having a tube mic in the first place, and, given that this is a piece of tube gear, the noise level is low enough to be ignored for all practical purposes unless you happen to need to amplify a very low-level source that requires maximum gain, in which case a little background hiss becomes evident.

The input transformer is instrumental in minimising noise in tube circuits of this type and is also likely to be responsible for some of the subtle characteristics of the sound. At the same time, Groove Tubes have resisted the temptation to create excessive coloration and indeed, the spec shows the amount of distortion produced to be very low, at 0.013 percent at +4dBm.

The result is that the Brick comes over as having the same natural, 'easygoing' sound of classic tube equipment. If you're in the position of needing just one good input preamp that doesn't cost silly money, then the Brick is definitely worth a closer look. It is a no-frills solution that it is very well engineered, mechanically and electronically. It also has a number of worthwhile live sound applications and is rugged enough to survive life on the road.

If you're considering purchasing the Brick, you could also look at products such as the SPL Gold Mic (which has two channels), the Aphex 207, and Universal Audio's Solo 110 (both single channel).

As a simple Mic amp/DI solution, the Brick is hard to fault. It uses traditional tube circuitry and good components to deliver a smooth and classy sound without adding unnecessary amounts of distortion.