Despite its name suggesting a late-night flight or train journey, the Little Labs Redeye is actually a passive direct box that can also be used for guitar 're-amping' (hence Re-DI or Redeye). As with most of this company's products, it also has a couple of additional tricks up its electronic sleeve, including buttons for phase reverse and ground lift and a novel linking feature. A further button converts the Redeye from a direct box into a re-amp box, with dedicated input and output connectors, plus an output level control. Re-amping in this context refers, of course, to taking a guitar signal from a recorder at line level, feeding it back through a guitar amplifier and then re-recording the result. The reason you need a box rather than just a cable is that a guitar amplifier expects to 'see' the output level and impedance of a guitar, not the line output stage of a recorder or mixer.

Though it's a little larger than a conventional DI box, four Redeyes can be fitted into 1U of rack space, and as all the circuitry is passive, there's no need for a power supply. You can also daisy-chain the units to provide multiple guitar-level feeds from a single balanced or unbalanced source: rear-panel in and out expansion jacks are provided for this purpose, activated by one of the four front-panel buttons. The Redeye can also be used in conjunction with an active DI box to provide a guitar-level output signal splitter with as many outputs as there are linked Redeyes. The company also recommend putting a Redeye between a wireless guitar receiver and the amplifier to provide optimal matching.

Given that this is a passive unit, you'd be correct in assuming that the majority of the work is done using audio transformers. The Redeye uses a custom-wound model made using the same core material and winding technique as the acclaimed UTC transformers found in some other high-end pro-audio devices.

The jack socket at the left of the front panel provides a passive instrument input. It can be reconfigured to override the rear-panel instrument input jack when the Redeye is used in a fixed rackmounted application, but normally the two jacks are linked, so either can be an In or a Thru. The Re-amp/DI switch determines whether the Redeye runs as a passive direct box or a re-amp box, and Local/Exp In selects whether the re-amp source comes from the rear-panel female XLR or from the rear expansion TRS input jack, both of which can handle balanced sources at line level. Phase invert simply switches the polarity of the signal so that positive-going signals become negative-going and vice versa.

When Ground Lift is activated in DI box mode, pin 1 of the output XLR is disconnected from ground; in Re-amp mode it lifts the sleeve of the re-amp output jack. In DI mode, the XLR output sends a balanced mic level signal in the usual way. Where levels need to be reduced, such as when fed from a +4dBu source, there is a Pad switch, accessible by a small screwdriver or toothpick. Re-amp Level adjusts the guitar output level, where fully clockwise provides unity gain.

Ergonomically, the unit is sensibly robust and practically set out, though the legending associated with the knobs and sockets is so small that it is almost impossible to read unless the unit is at eye level and reasonably lit. As a straight Instrument DI, the Redeye delivers a solid, confident signal, with a believable mid-range and, because it is passive, it adds no noise (other than, if you want to be pedantic, the minute thermal resistance noise contribution common to all circuits operating at above absolute zero). It works well on guitars and basses, retaining a useful degree of warmth but without actually adding any obvious coloration. Clearly, if you want an overdriven guitar sound you'll need to use suitable speaker emulation and distortion devices, or their software equivalents, but at least this way you get to start with a good-quality signal, and because the output is balanced, you can use long cable lengths between the box and the recording system.

Used as a re-amp source, the Redeye does the business and, providing you match up the levels so you're feeding the amp the same level as you'd get from a guitar, the tonality is essentially the same. What you don't get is the effect of any physical feedback from the speaker to the guitar strings, but for most styles that shouldn't matter, and I found I could get very good results very quickly. If you're a death shredder, or whatever the current fashionable rock genre happens to be, then you probably won't be recording clean guitar via a DI box without also having an amp blazing away in the room.

As with all Little Labs products, the Redeye isn't cheap (£197 including VAT), but for your money you get a properly engineered, well-thought-out piece of gear, which will deliver on performance and last you for many years. Little Labs may not make the most romantic kit on the planet, but when it comes to developing utility devices with class, they take a lot of beating. Paul White

I'm one of those sad people who keep going on about how good the old tape flanging used to sound, and how emotionally bereft the effect is when you get it out of a tin. Most flanger boxes and plug-ins use an LFO for modulation, which doesn't sound anything like the random feel you get from slowing down tape machines using hand friction. As luck would have it, I was working on a demo where I felt the guitar solo might benefit from a little gentle pitch-correction, so I used Logic 's pitch-fixing plug-in, which works in much the same way as the original version of Auto-Tune. You tell it the scale notes, set the correction speed and it does the rest.

As it turned out, it made very little subjective difference, as this particular solo was pretty accurate anyway, but during the editing I'd copied the original guitar part onto another track, so I ended up playing one with pitch correction and one without at the same time. The result was a kind of fake double-tracking — and regular readers will know that I often use this trick on vocals if the singer isn't capable of phrasing the same thing the same way twice. However, when I tried slowing down the tracking speed to around one quarter of the available fader scale, the pitch correction was much slower and more fluid, and when combined with the dry track it produced a very nice psychedelic effect that fell somewhere between tape flanging and double-tracking. I tried panning the two tracks slightly either side of centre to get some stereo width but without over-diluting the effect, which would happen if the panning was hard left and right, and was greeted by a flanging type of effect that seemed to move across the stereo field in a more or less random way as the amount of pitch correction applied changed. You need to get both tracks playing back at the same level for maximum effect, but other than that there's nothing to it. If you have a pitch fixing plug-in and you need something to spice up your guitar solos, give this a shot because it really works. Experiment with the pitch-correction speed to see how that affects the flanging speed, and stick to the slower end of the range for the most dramatic results. Paul White

How Deep Are Your Nut Slots?

If you find that one of your nut slots is too deep and the string is rattling against the first fret, try putting a blob of Superglue in the slot, then packing some baking powder or bicarbonate of soda down on top of it. This sets very hard almost immediately, and then you can recut it, being careful not to go too deep this time. If you have a black nut, you can mix powdered pencil lead with the baking powder to help match the colour, and the graphite will also help avoid the string sticking in the nut. Take care when using Superglue: it sticks fingers better than any other material, and it is also hazardous to your eyes, so wearing spectacles or goggles is a good idea. Paul White

When playing live, I'm sure you've come across venues with fluorescent lighting or dimmers that cause your guitar to buzz unless you are physically touching the strings. I played at one such place a few weeks ago and whenever I let go of the guitar, the level of buzzing was horrendous, yet the landlord couldn't track down which appliance was causing it. If I touched the strings or any other metalwork on the guitar, it went away completely. The quick and dirty solution was to plug a spare guitar lead into one of the unused sockets in the back of my amp (such as an effects send, or in my case, an unused footswitch socket), then tuck the other end of the lead down the back of my trousers so that that the metal barrel of the jack made contact with my skin. Just don't use an extension speaker socket as there are lots of Volts on those! The solution worked perfectly and got a few chuckles at the same time. You can do the same thing in the studio if you face a similar problem. Paul White 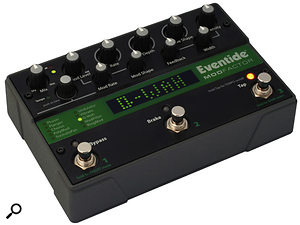 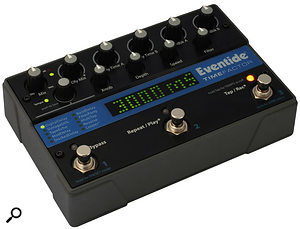 Eventide, who have built their reputation on some studio classics, such as the H3000 Harmonizer, have now made some of their best-known effects available in guitar pedal form. With instantaneous program change, true analogue bypass, tap tempo for tweakable beat matching, and full parameter real-time editing via 10 onboard knobs, the Time Factor and Mod Factor combine studio sound quality with the speed and convenience of a stompbox. They offer 27 customisable presets (or an unlimited number via MIDI) that are accessible via the three metal footswitches. These boxes also include features such as a plug-and-play expression pedal input for control of wet/dry mix, or any combination of parameters, MIDI effect select and parameter control. They also offer instrument and line-level inputs and outputs, which means they should be easy to integrate into your rig. Each box features a bright, easy-to-read LED display, housed in rugged cast metal. A USB port allows users to download upgrades from the Internet.

Eventide say that the Time Factor and Mod Factor include their 10 best delay and modulation effects from the past 35 years. The Time Factor will be available in May, with the Mod Factor following in July, each retailing for £299 including VAT.