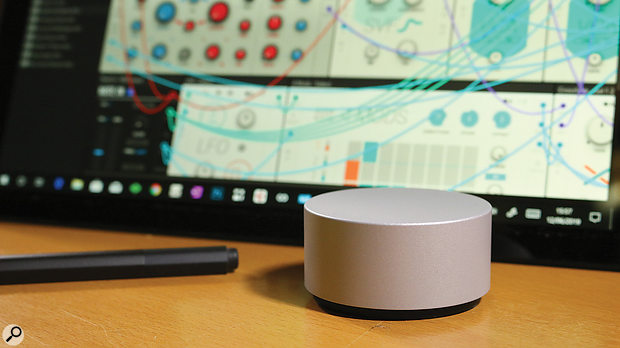 The Surface Dial is a battery powered, Bluetooth-enabled peripheral designed as a tool to aid the creative process. It's beautifully designed, weighty, responsive, stylish and good for almost nothing. It has found a sense of purpose in the computer art and drawing packages that you see in the promotional videos, but largely the Surface Dial's brilliance is confined to turning the contrast up and down on your Surface's screen or enacting the odd keyboard shortcut.

Help is at hand from the remarkably named Elephant software, from developer Pablo Martin, who operates under the name Hi!Computer. Pablo was one half of SmithsonMartin, who created the Emulator touchscreen MIDI controller.

Elephant version 1 arrived last year and promptly transformed the Dial into a bona fide MIDI controller. That first version broke open the bags of potential the Dial has as a useful device, and now the near-as-dammit final version 1.92 consolidates it into a quite remarkable knob controller of pretty much anything.

Place the mouse pointer on any knob, slider or parameter in any audio software like Reaktor, VCV Rack or a plug-in, and Elephant will capture the control directly to the Dial. Point mouse, turn Dial — it's as easy as that. This translates most brilliantly to the touchscreen of the Surface range of computers, where you can tap a knob on the screen and instantly control it with the Dial. No mapping, no fiddling about, just touch it and control it. The simplicity and elegance are breathtaking, and the Surface Dial that had been languishing on a shelf suddenly finds itself sitting alongside your Surface as a useful companion to music–making.

That Surface Dial that had been languishing on a shelf suddenly finds itself sitting alongside your Surface as a useful companion to music-making.

The MIDI control is still there, and the workflow around switching CC numbers has been greatly improved via the use of keyboard or mouse shortcuts and the inclusion of the Elephant virtual MIDI port. The mouse control mode is great for instant and versatile control, but if you want more permanent and easily accessible control then you can map up to 12 CC numbers and switch between them with a keyboard shortcut. Spend a moment or two MIDI mapping your synth and you're off leaping from knob to knob at the touch of a key. The new version also has a Mackie Control mode that enables you to harness the Dial as a jog wheel in your DAW.

The turning of the Surface Dial is pleasingly smooth, the rubber bottom sticks well to the desk and it can handle one–finger jog wheel–style revolutions as well as regular turning. The Elephant app lets you select from seven different levels of sensitivity for looser or keener control. Some tweaking is required depending on the software you're using it with. I found that Arturia synths work perfectly with all modes of control. Others like Reaktor and Reason can cause a jump of the knob value when you attempt to tap another knob, but a tick box solves this in the settings. Some software requires you to click to release control; some doesn't.

It is possible to lose your mouse and get confused over what is controlling what, but holding down the Dial exits Elephant and gets you out of trouble.

The Surface Dial will run with any Bluetooth–enabled Windows 10 PC, and Elephant is so good that it's almost enough of a reason to buy one. For disappointed existing owners it's absolutely essential.