With functionality that could actually surpass that of the iPad, Microsoft's Surface looks set to make a big splash in the tablet market. 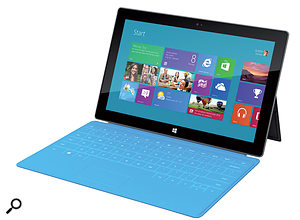 With a larger yet slimmer screen than the iPad and an array of colourful keyboard options, Microsoft's Surface could be a major player on the tablet scene.

As I write this, Microsoft have just unveiled their own branded tablet, and thus enter into direct competition with Apple as a hardware manufacturer. The new Microsoft Surface tablet has a magnesium case, is just 9.3mm thick, has a 10.6-inch screen, a magnetic cover, which doubles as a keyboard (available in various colours), and a kickstand to hold it upright on a table.

It runs Windows RT, a limited version of Windows 8 with Metro-styled GUI for ARM microprocessors (these employ a 32-bit reduced instruction set, and are used in over 90 percent of the world's mobile phones, hand-held game consoles and calculators), and will be available with storage of 32 or 64 GB. A 14mm-thick version will also be released in 128 or 64 GB versions that run Windows 8 Pro. Both models also work with a pen accessory that overrides hand input when held close to the tablet screen, using 'digital ink' at a resolution of 600dpi. This is the stylus approach that has already been very successful for Samsung with their Galaxy Note Android smartphone/tablet hybrid, making document editing and note-taking a far more pleasurable experience.

No pricing has been announced for any of the Microsoft Surface models, although it's expected to be similar to competing models from other manufacturers. However, quite how the host of other Windows device makers, including Hewlett Packard, Samsung, Acer, Dell, Toshiba, Lenovo and Nokia, will react to Microsoft's news is another matter, especially since they are all beavering away on Windows 8 and Windows RT tablet designs of their own to coincide with the release of Windows 8.

Fortunately, with predictions that more tablet PCs will be bought by 2016 than notebook PCs, an encouraging trend for 2012 is that the price of tablet computers seems to be dropping rapidly. Although we largely have Apple to thank for this (due to their iPad 2 price cuts after third-generation models were released), it has nevertheless resulted in more aggressive price-cutting across the board that benefits the PC customer too. There may be interesting times ahead...

After a wait of over a year since they first appeared on new Macs, PCs equipped with Thunderbolt ports are finally shipping. I first mentioned Acer's Aspire S5 Ultrabook in PC Notes March 2012 after it was announced at the Consumer Electronics Show in Las Vegas as the world's thinnest Ultrabook to date, as well as the first PC to incorporate a Thunderbolt port, and it's now available for purchase. With a stylish black magnesium-alloy and brushed-metal chassis, 13.3-inch backlit LED screen, 4GB of RAM, and a 256GB solid-state drive, it's bound to sell well, especially as it incorporates one of the latest Ivy Bridge processors. Several Thunderbolt-equipped motherboards have also just become available to OEMs and the general public, including Intel's Desktop Board DZ77RE-75K and the P8Z77-V Premium from Asus. All three of these products feature a Cactus Ridge Thunderbolt controller chip, and differ from the latest Macs in also offering native USB 3 support.

With its excellent 10GB-per-second, bidirectional bandwidth, Thunderbolt typically offers around double the maximum speed of USB 3 with suitable peripherals, as well as daisy-chaining capabilities, but you still tend to pay considerably more for these extras. For instance, many products that offer Thunderbolt I/O do so as an optional upgrade. One example is Seagate's Backup Plus external hard drives, which come with USB 3 I/O as standard and the Thunderbolt I/O option costing an additional 80 percent over the basic price. Moreover, two-metre Thunderbolt cables still cost around $49£39 each and are often not included with peripherals that need them. It therefore remains to be seen how Thunderbolt will compete with USB 3, especially since USB 3 ports can also be used to plug in USB 1.1 and USB 2 peripherals, while Thunderbolt ports are only of use if you have a Thunderbolt device to plug into them.

Thunderbolt audio interfaces also look destined to be top-end products only, which makes sense considering that Firewire and USB 3 are already capable of running more simultaneous audio tracks than many of us need. Both Apogee and Universal Audio are already committed to Thunderbolt's higher-bandwidth and low-latency audio capabilities, and the first audio interface to be released with Thunderbolt connectivity is the Apollo from Universal Audio (reviewed in SOS June 2012), which lets you record all your input signals through any of the famous UA plug-ins with 'sub 2ms latency'. However, even this comes with Firewire 800 I/O as standard, and the Thunderbolt card as an optional extra. Thunderbolt still has plenty of potential, but is currently seen as just too expensive by many manufacturers and consumers. Let's hope pricing drops sufficiently to make it more desirable across the board, from budget to high end.