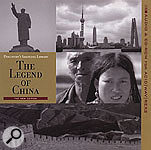 This library, comprising both an audio CD and an Acid/WAV/REX 2 CD-ROM, includes some ambient sounds and snatches of Chinese opera singing, but there are also some fantastic plucked string phrases, with all the vibrato and pitch-bend styles associated with oriental music. Best of all, there are phrases from the Chinese violin, which has a small body with a vellum head — a sort of cross between a drum and a banjo with two strings — and the strings are 'fretted' in mid-air rather than pressed onto the neck. It sounds like a morph between a western violin and a human voice — very nice. The flute phrases that follow also have that lovely haunting Eastern quality.

After these, there is a selection of nasal-sounding reed pipes, traditional drums, cymbal hits, gongs, and sung vocal phrases. There are also some very nice spoken female vocal phrases, though, as usual, I have no idea what they're on about — let's hope it's nothing too rude! After that brief vocal respite, we go back to plucked string sounds, this time with huge pitch slides, not unlike the sound of somebody tuning a guitar, but somehow more musical. Next up is something sounding rather like a western banjo, a few more violin phrases, and then a mixed bag of additional percussion including some fantastic gongs and bells — these would be great in meditation music!

However, the spell is finally broken by male vocals that sound like extracts from the Endurance game show! Just when you feel you've had enough, there are some manic female vocals (probably traditional Chinese opera) that sound as though the poor girl is being tickled while being held by her ankles over a live volcano! After that weird interlude, there's a selection of hits and phrases taken from what sounds like traditional street music, plus a banjo ensemble playing what sounds suspiciously like 'stealth country' music. In all, this is a particularly diverse and generous library, and though there's a lot in here you may never use there are also some real gems. Paul White 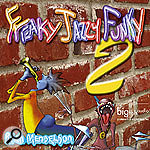 Rich Mendleson's follow-up to the original (and very successful) Freaky Jazzy Funky comprises some 30 construction kits. Using Sonic Foundry's Acid Pro 4, I tested the WAV files, of which there were nearly 500 totalling over 850MB. Usefully, both tempo and key are specified in the folder name for each kit. In addition, each construction kit contains between one and three short 'pre-mixed' WAV files that demonstrate how the individual loops (between 10 and 20 per kit) can be combined.

As well as the usual drum and percussion loops, most of the kits feature some funky bass and electric guitar — with plenty of classic wah-wah loops within the latter. There are also a good stock of keyboard loops, including piano, Rhodes, organ, and various synth sounds. While the bass certainly provides the funk, the jazz tends to come from the brass. There are some excellent trumpet and trombone loops, and these seem both well played and recorded. Many of these are short lead lines or solos, which run for several bars. They are presented here with reverb already applied and the sound is very much 'instant jazz club'.

The majority of the original tempos are under 120bpm, and the mood is therefore pretty laid-back in some of the kits. Within the overall jazz/funk theme, there is a little variety. For example, some kits contain a distinctly Latin flavour (the percussion often sets the tone here), while others have rather a '70s retro feel and would not have felt out of place as part of the soundtrack to the original Starsky & Hutch TV series (particularly with the wah-wah guitar)! I could also imagine the more contemporary kits sitting in Sex And The City or (minus the horn lead lines) as a backing for a downtempo R&B 'lurve' tune sung by someone like Janet Jackson.

Mixing loops both within and between the various construction kits was easy enough, although the files had not been Acid ised so I had to set the root note for each pitched loop in order for Acid to do it's pitch-shifting magic. This minor inconvenience aside, the relatively consistent feel across the collection made it simple to work with. The only other downside is for those working in library/production music, as the license terms do not allow the loops to be used in that context. Otherwise, while there is perhaps nothing really new here in terms of the musical territory covered, the playing, recording, and attitude are spot on. If cool funk with jazzy overtones is your thing, then Freaky Jazzy Funky 2 has plenty to offer. John Walden

Here's an interesting one: a small collection of esoteric instruments made from the named hard substances, comprising technologies which span the Neolithic era, the age of Mozart, and the present day. Produced by Vienna Symphonic Library, Glass & Stones is one of the company's Horizon series of budget titles, adding a mouth-watering side dish to VSL's orchestral main menu.

Many of us will have endured an annoying relative's 'singing wine glass' party trick. (Your reviewer never mastered the circular stroking technique, but has shown aptitude in emptying the glass prior to a performance!) The set of thirteen musical glasses included here were specially made for music-making; their ethereal, high-pitched tones (whose sustains are conveniently looped) sound like disembodied spirit voices, evoking the music of the spheres, 1950s sci-fi soundtracks, and the Doctor Who TV theme.

Like Stevie Wonder, the 'glass harmonica' is a harmonica phenomenon and a musical wonder which dates from the '60s — the 1760s! Invented in 1761, this ingenious contraption consists of a closely overlapping set of chromatic glass bowls rotated by a pedal mechanism. The player touches the rotating edges, producing a lower-pitched, polyphonic version of the 'singing wine glass' sound, a delicate spooky sustain reminiscent of a wooden pipe organ's flute stop. Played with mallets (careful now!), the glass harmonica gives a lovely soft non-clangorous chime, like a mellow, subdued carillon or muted gamelan instrument.

Developed twenty years ago in Germany, the verrophone (from the French verre, meaning glass) is another musical rarity. This set of 30 tall, tuned glass tubes can be rubbed with moistened fingers to create atmospheric floaty sustains, or played with mallets to give a resonant and unusual xylophonic timbre. Truly a composer's dream.

So much for glass — on to stones, represented by a marvellous item known as the 'lithophone'. In stark contrast to the rather primitive, clinky high-pitched instrument in VSL's Pro Edition, this specimen has a sumptuous, sustaining tone and a wide range which incorporates a deep bass register. Looking like a gigantic, alien marimba whose wooden keys have been replaced by massive stone slabs, the lithophone has great exotic appeal; its soft mallet samples provide a great timbre for rippling tuned-percussion patterns, while hard mallet hits add a musically pure pitch to the ancient ceremonial sound of resonant stones. Rock on!

As one would expect from a VSL release, all four instruments in this 4.41GB library are multi-dynamic and perform different note lengths, trills, tremolos, glissandi, and effects, including some mad processing on certain lithophone samples. Convention-bound producers may reject such left-field musical creations on the grounds that they sound too unfamiliar, but creative musicians and composers will cherish them for exactly that reason. Idiosyncratic they may be, but the freshness, subtlety and sonic beauty of these fabulous constructions shines through. Dave Stewart

VSL's orchestral library sounds great and covers a hell of a lot of musical territory, but at £3660 in the UK their complete Pro Edition package isn't exactly cheap. To ease the pain, the Vienna company created the more affordable Horizon series of themed titles. Some of these venture into non-orchestral areas, but Opus 1 stays on home ground, offering a comprehensive compilation of samples taken from VSL's Orchestral Cube and Performance Set Pro Edition.

As all the instruments in Opus 1 were examined in detail in SOS May 2003 and March 2004, we'll concentrate here on providing an overview. The selection retains the main library's selling points: the string and brass ensembles are all there, along with most of the solo winds. Some of the less common brass instruments (bass trumpet, Wagner tuba, cimbasso, and so forth) have been left out, and there are no solo strings — these have been corralled off into another title, the cunningly titled (and highly recommended) Solo Strings. Sadly, the alto flute is also absent.

There are also some innovations: a highly playable (if slightly odd) string ensemble of violins, violas, and double basses has been programmed, and some pairs of instruments (clarinet & bass clarinet, tenor & contrabass trombone, bass & contrabass tuba) have been fused into one by tacking the bass instrument's bottom notes underneath its smaller relative's low register. (A shame that wasn't done with the concert and alto flutes.) Opus 1 lacks the Pro Edition 's exotic percussion, but retains a traditional orchestral percussion collection, along with the lovely harp and a small array of tuned percussion. (The latter is more intensively covered in another Horizon release, Mallets, containing marimba, xylophone, vibraphone, glockenspiel, celeste, temple blocks, and wood blocks, all taken from the main library.)

A complete list of Opus 1 's instruments and articulations can be found on VSL's web site. All of the main playing styles (including VSL's trademark 'special dynamics') are represented, though the Pro Edition 's countless crescendos, diminuendos, grace notes, and upbeats have been omitted. One big attraction is the inclusion of 'performance legato' samples for all the strings, brass and woodwind, as well as some bonus brass note repetitions and handy octave runs from the higher strings. Registered users can download VSL's excellent Performance Tool MIDI utility, which makes it easy to create authentic, utterly convincing legato lines.

Opus 1 's choice of nearly forty instruments and ensembles is musically sound, and the large number of performance options make up for the odd gap in its instrumentation. At £660, this title is still not exactly cheap, but it would be unrealistic to expect to buy 27GB of nearly 38000 top-quality orchestral samples for much less. Economics apart, VSL's philosophy is to give users the right tools for composition and orchestration, and in this respect the library succeeds admirably. Dave Stewart