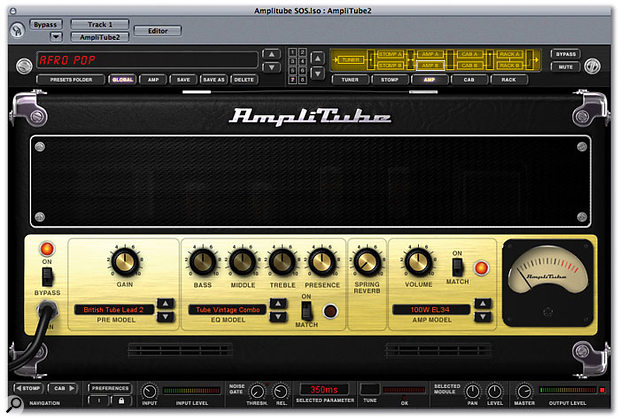 By default, choices of preamp, EQ and amp model are linked, but you can mix and match to create hybrid designs.

IK have given their popular guitar amp emulator a radical makeover, with a huge range of new models and a sound that's more accurate than ever.

I recall being favourably impressed by the original IK Amplitube guitar amp modelling plug-in, and the new version 2 is far more than an update — it's almost a new product, with a fresh interface and new technology under the hood. A new modelling approach (DSM or Dynamic Saturation Modelling) has been developed to more accurately capture the way non-linear systems (such as amps that distort) affect a real-world dynamic signal, and the range of devices being modelled has also been extended. Plug-in formats supported extend to VST, Audio Units and Digidesign's RTAS, at sample rates up to 192kHz, and Amplitube 2 requires Mac OS 10.3 or later or Windows XP.

Amplitube 2 allows you to mix and match preamp sections, EQ sections and power stages to create combinations that aren't available in the hardware world. Once past the rather nice guitar tuner, the signal path comprises four sections: stomp effects, the amplifier itself, the speaker cabinet and mic arrangement to which the cabinet is connected, and any studio rack equipment used for post-processing. A further advance is the ability to use two chains of components at the same time with a choice of series or parallel routing options, making it possible to create layered sounds or expansive stereo spreads. All this is accessed from a surprisingly intuitive user interface. What're more, if you're a little timid when it comes to sound editing, you get a comprehensive library of amps and amp/FX combinations with the program that covers all styles.

An optional hardware floor controller, the Stomp I/O, will soon be available but no additional hardware beyond your existing DAW setup is actually necessary to use the program, other than having an audio interface with a high-impedance instrument input for your guitar or a separate high-impedance DI box. (As ever, if you plug a guitar directly into a line input, the tone will suffer.)

Amplitube 2 provides the user with a choice of 14 preamps, 14 amp EQs and seven power amps, which means a total of 1372 amp permutations before you even begin to tweak the controls, change the speaker cabinets or apply effects. If you count the effects, cabs and mic permutations, the number is astronomical — and you still haven't fiddled with any of the controls! The amp can be hooked up to 16 different speaker cabinets and miked via six different mic models (each with four placement options), though I was sorry to find no ribbon mic emulation as I've grown rather fond of those for guitar miking.

Prior to the amplifier you have a choice of 21 beautifully rendered pedal effects that sit on an equally beautifully rendered wooden floor, and if you need more processing, there are 11 rack-style effects that come at the end of the chain. Over 80 guitar amp and effect emulations are packed into Amplitube 2, with amp models based on the popular Fender, Vox and Marshall brands as well as a few boutique amps — as with most such products, though, there's no link or endorsement between the manufacturers of the amps being modelled and IK Multimedia. The same is true of the stompboxes, where the hardware modelled includes such classics as the Arbiter Fuzz Face, the Ibanez Tube Screamer, the MXR Dynacomp and Phase 100 and the Electro-Harmonix Memory Man delay.

At a lower cost there is the Line 6 Tone Port, which also includes an audio interface and can produce excellent results on a par with the Pod XT. There's also the more straightforward Guitar Amp from Waves, which includes a special guitar DI box, and the incredibly flexible Guitar Rig 2 from Native Instruments, which also has a hardware control option.

Amplitube II installs from a single DVD-ROM and comes with a USB dongle. This needs to be authorised and registered at the IK Multimedia web site, but if your studio computer is connected to the Internet, the whole procedure is fast and largely automatic. If you use a separate computer it takes a little longer but still is not complicated. The way Amplitube 2 opens up is as a single window, with buttons that switch the middle section of the display between Tuner, Stomp, Amp Cab or Rack section views. In the upper strips are the usual Save and Load buttons, as well as arrow keys for cruising the presets, and of course there's a display showing the patch title. Eight rather small numbered buttons near the centre select from eight preset routing options, with the routing block diagram shown to the right, immediately above the section selection buttons. Bypass and Mute are to the right and do exactly what you'd expect. 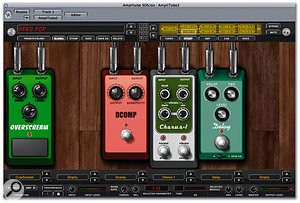 A huge range of virtual stompboxes is available.At the bottom of the screen there are two more buttons that allow you to step through the various sections (Tuner, Stomp, Amp and so on) if you don't want to use the more direct buttons at the top of the screen. There's a section to access the plug-in's preferences, which contain oversampling and resolution settings that can be used to trade off quality against the amount of CPU overhead required; other utility sections include an input level control and meter, and a simple noise gate that sits at the front of the signal chain and has only threshold and release time controls. To the right of this is a window showing the value of the currently selected parameter, and there's also a simplified version of the tuner always on display so that you can check your tuning without having to call up the dedicated tuner window. There are also Pan and Level controls for the currently selected module, as well as a master output level control and meter. All the knobs and sliders can be automated from within the host sequencer to the extent that the host sequencer supports automation, with the caveat that if you use the same module twice in one of the signal paths, you can only automate the first one.

In the Amplifier window, there are separate menus for the preamp, EQ and power amp elements, and by default these are all linked so that when you change one, the others change appropriately for your choice of amplifier. However, you can turn off the Match switches to mix and match sections from different amplifiers.

When it comes to cab miking, you can have your choice of virtual mic on or off axis at either near or distant positions. These options are fixed, though, so you can't gradually vary the mic position. There's also a slider for room ambience that adds a nice sense of place and space to the sound. In the rack section, you can use up to four rack effects at the same time, and there's a good choice of modulation, delay/reverb, pitch, EQ, dynamics and enhancer effects from which to choose. Most of the effects are fairly familiar, but the pitch-shifting section includes the ability to create harmonies according to musical key and scale, providing you only feed in single-note lines.

Using Amplitube 2 proved to be extremely straightforward, and most of what you need to to do can be sussed without ever needing to read the manual. However, it is worth reading through the manual at least once, as it tells you important information such as the significance of using oversampling (or not) in the stomp and amp sections to avoid aliasing artifacts. There's also a lot of useful information about the various modelled amplifers and how their controls work, because as with any rigorously designed modelling software of this kind, the operation of the controls varies to match the device being emulated. I like the way the program is set out just as a stage setup would be — pedals first, then amps and speakers, and finally the rack processors that would be on the mixing console — as this makes the operating environment very familiar. The only slight departure from normality is the flexibility of the two-channel routing, but you don't have to use this if you don't want to. 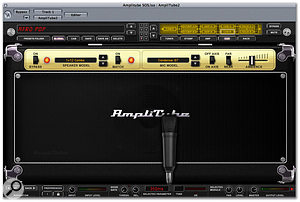 There's a choice of speakers and mic positions, though the mic distance is not continuously variable.As I so often find with programs of this kind, the factory patches are great for showing off the range of sounds that can be coaxed from the plug-in, but relatively few are things you'd normally use yourself, so you do have to take the time to set up your own patches. Furthermore, as any guitarist knows, even great amps can sound bad — it all comes down to finding the sweet spot on the amp that suits the instrument being used with it. I have several Strats and they all sound different, so when I change guitars, I also need to readjust the amp. It's the same with a program like Amplitube — time spent fine-tuning the amp settings to match the guitar really pays off.

On the whole I found the amp sounds nicely responsive and satisfying to play, though I know there will always be contention, especially when it comes to emulating those really sweet, low-powered tube amps played just on the edge. Even so, I got some very nice quasi-country sounds by using the Brit Class A TB emulation with a compressor stompbox patched in front of it. The sounds sit well in a mix and the more overdriven sounds give off a nice sense of energy. Some of the preset names allude to well-known artists or tracks, and though I'd probably fine-tune them some more, they get pretty close providing you play in the same style.

I tried to recreate some of my personal favourite guitar sounds and was surprised not only by how close (and how quickly) I could get them, but also by the general playablity of the end result. These sounds record beautifully and sit well in a mix with no need for additional processing and the only slight cause for disappointment on my behalf was the lack of a tape-echo emulation. You get conventional analogue delays and digital delays, both of which sound great, but although there is a degree of tonal control on the digital echo which can get close to the sound of tape, it doesn't have that gentle wow and flutter.

Having played with Amplitube 2, I can see why IK Multimedia thought it would be a good idea to offer an optional floor controller so that guitarists could take it out live. Indeed, I'm almost tempted to try that myself. This being the case, it seems odd that there is no stand-alone mode — Amplitube 2 always needs to run as a plug-in within a host program, and if you want a stand-alone amp simulator you'll need IK's Amplitube Live, which has yet to be updated to version 2.

Currently there are several software plug-ins that purport to model that elusive guitar amp sound, and I think Amplitube 2 gets as close as any, striking a good balance between ease of use and flexibility. It's not the cheapest option around, but in my view it is well worth the asking price, and should meet the recording needs of most pop and rock players.

Amplitube 2 is a very flexible and friendly guitar amp and effect modelling package capable of giving some great results. As with real hardware, though, you have to be prepared to fine-tune the sounds to get the best out of it.