If you actually owned every amplifier, stomp box and microphone that's emulated in Amplitube 3, you'd need a bigger house. But does more always equal better? 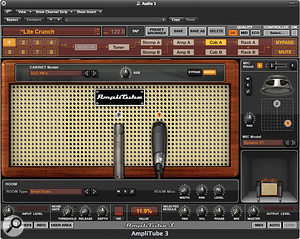 Amplitube's virtual miking possibilities have been extended: there are now more mic models and more flexibility about how they are placed and combined.

IK Multimedia's Amplitube has long been amongst the front runners in the amp‑modelling software race, and they've upped the pace with Amplitube 3. In this version, their VRM (Volumetric Response Modelling) amp modelling process has been refined to improve the dynamic response of the amps. New amp and effect models have been added, and the speaker miking section has been updated. As before, the program runs under Windows or Mac OS X, either as a stand‑alone application or as a plug‑in in Audio Units, VST and RTAS formats.

In Amplitube 3, brand‑new models sit alongside models plucked from the more specialised Jimi Hendrix and Metal versions of the program, and the total now comprises over 160 pieces of modelled equipment, more than double what was available in version 2. Today's 'toy count' comes in at 51 stomp boxes and effects, 31 amplifiers, preamps and power amps, 46 speaker cabinet models, 15 stage and studio mics, and 17 further post‑amplifier rack effects. All these virtual goodies are accessed through five modules called Tuner, Stomp Pedalboard, Amp Head, Cabinet/Microphones and Rack effects. The program's architecture has also been opened up, allowing expansion packages, such as Amplitube Fender and Ampeg SVX, to be accessed from within it.

A newly implemented drag‑and‑drop effects configuration feature makes it easier to rearrange effects, both on that beautifully rendered wooden floor and in the effects rack. Stomp boxes and rack effects are still initially chosen from pull‑down menus, but can now be re-ordered just by dragging them to a new position. 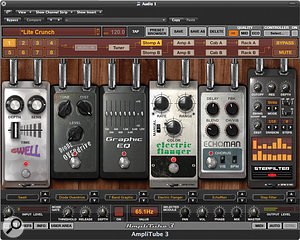 Not only can you now drag and drop effects to re-order them, but there are also some nifty new devices, such as the Swell (far left) and StepFilter (far right) stomp boxes. The new cabinet/room section allows the close mic or mics to be individually adjusted for distance and side‑to‑side position, while the room mics can be adjusted in position, and you can set the size of the room in which they reside. Close and room mics can be panned independently, and you can even adjust the physical size of speaker cabinets. 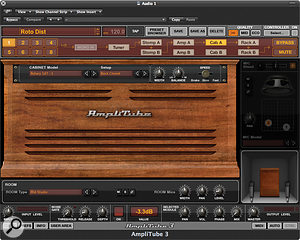 A highlight of Amplitube 3 is the detailed rotary speaker emulation, which showcases IK's 'VRM' technology.

The VRM‑based rotary‑speaker simulation is new, and seems to have been optimised for guitar (many of the keyboard rotary plug‑ins I've tried dull the top end of the sound quite significantly when used in this role). While I don't think any plug‑in has yet quite captured the watery swirl of the real thing, this one gets pretty close and is certainly very musical. Apparently, it uses the Leslie 147 as its inspiration, and there are two versions, offering vintage or modern woofer drivers.

Routing has been expanded to support both mono and full‑stereo signal paths, with eight possible series/parallel signal‑routing combinations. These are selected using the eight number buttons at the top left of the window, and displayed as a series of blocks and connecting paths. You can feed the two sides of a stereo setup from separate sources, allowing two instruments to be treated at the same time. 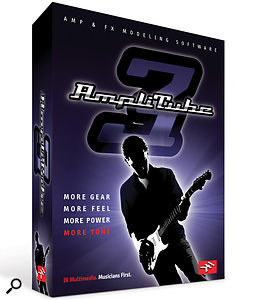 A more organised, database‑style approach has been taken to preset organisation, so that presets can be saved or recalled via user‑defined attributes. There's also an updated copy and paste function that enables configurations of amplifiers or effects to be added into new presets without losing their settings.

For those less concerned with old‑school rock and more into exploring new sonic territory, Amplitube 3 has acquired StepFilter, StepSlicer, TapDelay, Rezo and Swell effects, all in stomp and rack versions. The step effects can be sync'ed to DAW tempo.

An intuitive MIDI Learn feature makes it easier to map parameters to third‑party external controller hardware, though no user mapping is required when using IK's own controller hardware. The MIDI Learn mode follows the now‑familiar method where you click on the desired control, then waggle the knob or slider you want to use to manipulate it. IK have also added a four‑track recorder for knocking out demos without having to use your DAW, and you can import WAVs, MP3s and other popular audio file formats if you need something to play along to. Just in case you're thinking all this might overtax your computer, they've also added a choice of three quality modes, and you can also turn off oversampling in the amp and distortion models to save on CPU load. 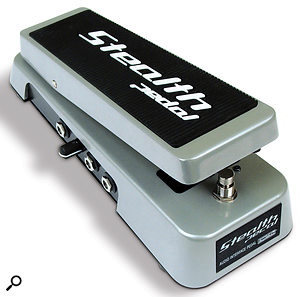 You can buy Amplitube 3 in a cost-effective bundle with the StealthPedal interface/controller.

It's difficult to be completely objective about amp modelling products, as everyone has their own idea of a good sound. For example, I invariably drift back to the Vox AC30 Top Boost sound for clean and blues tones, but if you're into shred, one of the high‑gain monsters is more likely to push your buttons. I'm always amazed at the number of accurately modelled boutique amplifiers that produce sounds I'd never dream of using, and that's true of every modelling product I've tried, not just this one. This is not a negative, merely an illustration of the fact that we're all looking for something different. However, there's now so much choice that you're almost certain to find a few amps you really like, and some of the additions are extremely good.

The models also seem to have improved in their dynamic response; you can back off the guitar volume control to get the sound to clean up, just as you can with a real amplifier, and the way the guitar feels as you play it is very close to what you'd expect if you were playing in the control room while monitoring your amp miked up in an adjoining studio. I was also impressed by the speaker and miking arrangments, which give a real 'recorded in a room' feel. To my ears, the clean amps have more analogue warmth and 'springiness' than many of the competitors, and while overdriven sounds are always initially impressive, it's those almost‑clean sounds that seem the hardest to get right. I particularly liked the new American Clean MkIII clean sound, though the models inspired by the likes of Fender and Vox also sound pretty sweet.

Amplitube's level of background noise is creditably low, although it inevitably increases as you use higher gain settings or the overdrive pedals, and the built‑in gate works as well as a gate can. Maybe it's time sliding‑filter dynamic noise reduction was applied to guitars?

With any modelling package such as this, the effects pedals are almost as big a part of the end result as the amps and speakers. Most of the effects are excellent, though I found the pitch‑shifter somewhat disappointing, as it has a noticeably grainy character. I loved the new slow‑attack Swell pedal, which works as well as any I've tried, while the new step effects are really useful, with very intuitive interfaces where you can drag bars around to set the parameters for the individual steps. The Rezo effect is also quite flexible, allowing you to tune the various resonators to different musical notes and then adjust their resonance to create anything from subtle tonal changes to weird tuned tunnel effects. 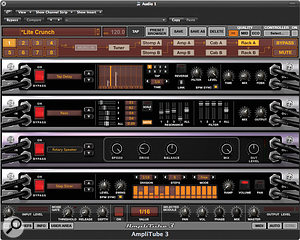 The new Step effects are available both in the floorboard and the post‑amp effects rack, as are other goodies such as Tap Delay and Rezo.

One limitation I did find frustrating, though, is not being able to place stomp effects in the post‑amp effects rack. For instance, I needed a phaser at the end of the signal chain for an experimental patch I was putting together, and couldn't find one. Same for tape delay — I'd have liked to have one available to drop in after the amp. I also found it mildly irritating that when you call up the otherwise excellent tuner, you then have to click a switch to turn it on, and there's a separate mute switch if you want to kill the sound. Surely a mute option could be set as a preference, and opening the tuner could activate it automatically?

All the extra models really add to the flexibility of this package, but for me, the high‑quality amp and speaker modelling is what sets it apart from most of the competition. It's also gratifying to get lots of good bass amps without having to pay for a separate program. Furthermore, there's no reason not to use the effects sections for processing non‑guitar tracks, especially now that you can process a stereo input, so you can also treat Amplitube 3 as a multi‑effects plug‑in. All the standard effects hold up well in comparison to the real thing, while those new stepped effects are great fun for tempo‑sync'ed compositions. I'd have liked a better pitch‑shifter, but apart from the inability to use stomp effects in the rack, the selection of effects and routing options is excellent. What's more, all this flexibility doesn't compromise ease of use.

I tend to mic a guitar amp to get the sound I want when recording, but having played with Amplitube 3 for a few days now, I could certainly be tempted to exploit its capabilities in a serious recording session, not just for the convenience factor, but because of its sound and sheer tonal scope. It seems that guitar amp and effect modelling is really coming of age now, and when you consider the amount of modelled kit you get for the price, Amplitube 3 looks like a bargain.

The best‑known native software alternatives are NI's Guitar Rig and Line 6's Pod Farm, though Waves' GTR, Peavey's Revalver and Softube's Vintage Amp Room are also well worth checking out. All offer a slightly different slant on the same basic idea, but the current version of Amplitube is up there with the best of them.

Amplitube 3 is a real heavyweight guitar-amp modelling package that is capable of producing some excellent results.

£279, or £309 with Amplitude StealthPedal interface/controller; upgrade from previous versions, £159; crossgrade for owners of other IK products, £209. Prices include VAT.