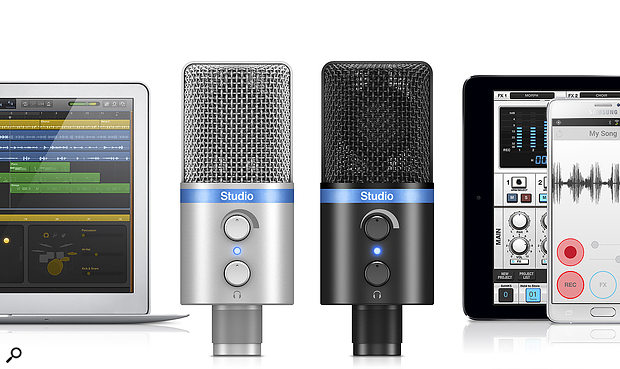 Microphones that include A-D converters, allowing them to be plugged directly into computers or iOS devices, are becoming increasingly popular, especially now that iPads have become powerful enough to run serious multitrack recording software. IK Multimedia have always had their fingers firmly on the iOS pulse, and their latest creation, the iRig Mic Studio, supports iPhone, iPad, iPod Touch, Android, Mac and PC and platforms.

This particular package is built around a large-diaphragm capacitor microphone with built-in 24-bit converters that support sample rates up to 48kHz. Physically, the mic looks much like any other side-address studio capacitor mic, but it’s around two thirds of the size you might expect. Both black and silver finishes are available.

The one-inch back-electret capsule has a fixed cardioid pattern, and in order to ensure maximum compatibility, the mic ships with Lightning, micro USB, OTG and USB cables that plug into the mic, though the older 30-pin cable (which I need for my iPad 3 and iPhone 4) is only available as an optional extra. Low-noise electronics ensure that hiss and distortion are kept at bay, and to keep the mic stable when working on the desktop you also get a portable table-top tripod stand. Also bundled with the mic is a suite of IK Multimedia apps, though the iRig Mic Studio also makes a very practical partner for third-party products such as Apple’s GarageBand. The mic appears as a two-channel audio interface and carries a two-channel return for feeding the on-board headphone amp.

SPLs of up to 133dB can be tolerated, so even loud electric guitars won’t intimidate it. By way of controls, there’s a preamp gain knob with multi-colour LED level metering and a separate level control for the headphones, all located on the front of the mic. The female micro-USB port in the place you’d normally expect to find an XLR socket provides the computer connection via the appropriate adaptor cable. The 3.5mm headphone socket is on the back of the mic.

The bundled software includes VocaLive, an App that offers a choice of 12 real-time vocal effects. Then there’s EZ Voice for singing along to any song in your device’s music collection, so that you can enjoy karaoke in the privacy of your own head! The iRig Recorder app works fine for basic recording such as podcasting, capturing song ideas or collecting sounds in the field. Then there’s Mic Room, a microphone-modelling app for iOS devices.

On my Mac, the mic showed up as a class-compliant device, the two mic-to-computer channels carrying the same mono signal. Speaking from around six inches from the mic gave me a very healthy recording level with the gain knob set at around its one o’clock position, with the meter LED turning mostly from blue to green, and flashing amber on the louder sections — if you get to red you’ve gone too far. There was also adequate headphone volume, but one feature missing from this mic that some of its competitors offer is a control for mixing the direct mic signal with the computer return signal in the phones mix, which is useful to allow the user to set up latency-free monitoring.

Overall the iRig Mic Studio performs well and delivers clean, clear sound. The tripod stand is adequately sturdy, and even if you don’t need all the bundled software the mic still represents good value.