IK Multimedia are continually adding new modules to their T‑Racks Custom Shop series. These are hosted within the free T‑Racks shell plug‑in, which is oriented towards mastering applications but can be used equally well for mixing. The latest additions are three new EQs, and all three feature an M/S mode which allows the Middle and Sides signals to be equalised separately and differently. In L/R stereo mode the same settings are usually applied to both channels, but left and right can be treated differently if required. Up to four settings can be saved under the ABCD buttons for comparison purposes. 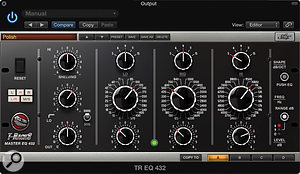 The Master EQ432 module is based on the Sontec transformerless, solid‑state mastering equaliser. It uses switched EQ frequencies, with five switched Q values per band; the three parametric bands have very little interaction with each other. There's also a low‑cut filter switchable from 50 to 100 Hz, a high shelving filter and a gain control for the output. The user can set the maximum cut/boost range to 6dB, 9dB or 12dB. This equaliser is designed for fine‑tuning a mix rather than beating it into shape, and as such, sounds very subtle and polished. Adjusting the various bands brings about the required spectral rebalancing in a very musical way, with no loss of focus — which is exactly what you need when mastering. In a word, or two: clean and transparent.

IK's EQ73 is a recreation of the legendary Neve 1073, and reproduces both the EQ curves and the non‑linear behaviour of the original amplifier path. The low shelving band has switchable frequencies and there's also a switchable‑frequency low‑cut filter. There's a choice of six mid‑range frequencies and there are also separate input and output level controls as well as mic/line switching to include the 'flavour' of the mic pre stage. A polarity button is also available along with separate bypass buttons for the EQ and the rest of the audio chain. 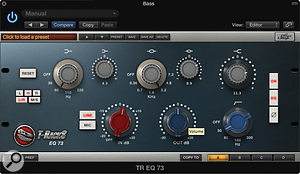 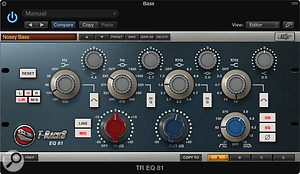 Finally, the EQ81 mimics the Neve 1081, an evolution of the 73 with added features that include an extra mid‑frequency band. In total, there are high and low bands, two mid‑range peaking filters and a pair of high‑ and low‑pass filters sharing a dual‑concentric control. While still not fully parametric, the two mid-bands can be switched from normal to high Q, while the two outer bands can be switched between shelving and peaking modes.

Unsurprisingly, the EQ73 and EQ81 modules have similar overall characters, though of course the EQ81 offers a noticeably greater degree of control. Unlike the EQ432 mastering equaliser, both modules are notable for character rather than transparency, which is why the originals are so popular when tracking and mixing. As you push the input level on the emulated preamp, the sound gets increasingly 'warm', eventually becoming very obviously distorted. What I like most, though, is the way the EQ manages to keep everything very tight and punchy‑sounding. Paul White