Some guitar sound libraries sample lots of different instruments so that the end user can choose what sort of sound they are after. Archtop differs because it is based on just one instrument, namely a customised Sadowsky Jim Hall hollow‑body arch‑top guitar with dual pickups.

Jim Hall was an American jazz musician, so jazz is clearly a style Archtop is intended to be used for. Nevertheless, Impact Soundworks claim that it is also suitable for funk, R&B, ambient, rock, pop and other styles, and have included a set of effects and processors that make it possible to overdrive the sound somewhat, taking it into blues guitar territory. 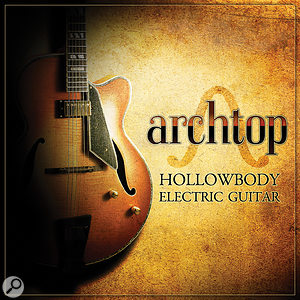 Archtop has just two Kontakt interfaces. The simplest is called Archtop Neck & Pick FX, which contains 28 noises that guitarists will be familiar with. They are the kind of growls, scrapes and squeaks made by quickly sliding from one fret to another and are handy for punctuating phrases.

The other interface is called Archtop, but it is vastly more complex and takes a while to load. It is divided into four pages titled Perform, Fretboard, Articulations and Engine.

The Perform page is where the general settings are made. Here, for example, it is possible to select the blend of neck and bridge pickup, the string preference and which effects and articulations are active.

Further control is given by the Engine page, which enables the user to fine‑tune string release noise, pick sounds, string resonance, pitch‑bend range and strum speed, for when chords are being triggered.

There is also a set of assignable keyswitches that greatly enhance performances by enabling the user to add in any of the articulations whenever and wherever they choose.

It is clear that a huge amount of effort has gone into Archtop's scripting, resulting in a very customisable instrument.

Sound wise, Archtop is impressive too. Not only does it sound very real (thanks in part to its use of eight round‑robin variations per articulation), but it also has a lovely mellow tone which still retains enough presence to cut through in a mix.

As a guitarist I'd still prefer to record a real guitar than to use Archtop in most situations, simply because it is easier to add expression and modify finger work while playing than it is to program it in from a keyboard. Non-guitarists, however, will probably see things differently and, with a little practice, should be able to fabricate very convincing and impressive guitar solos and chord‑based riffs to suit a great number of their compositions.