This is a Kontakt instrument with a difference. For a start, it’s built from samples of a one-off electro-acoustic instrument — a box with several guitar strings and a contact mic attached. By bowing and striking this with a fork, 10 distinct articulations were captured, at varying dynamic levels and with repeats to feed Kontakt’s round-robin voice allocation.

The samples range from pure and harmonic to scratchy and atonal. It’s mere conjecture on my part, but I reckon they’re probably more playable than the real thing. Kontakt’s pink keys offer all articulations plus an 11th user option in which a sample — suitably named and copied into the correct folder — is available alongside the rest. All of this would be worthwhile even before envelopes, effects, microtuning and arpeggiator got involved, but the real pleasure of Sonic Forest happens when a sound is ‘planted’. 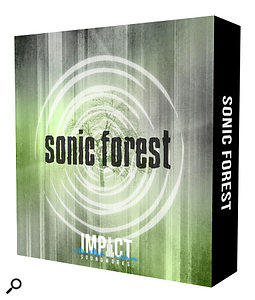 When planted, the selected sound is stretched across the keyboard and transported into a magical granular world where changes are made using evocative parameters such as Bloom, Tangle and Flourish. For instant gratification — no need to think for a moment about the nature of granular synthesis — 32 patches are ready-prepared. Some contain treats to use ‘as is’, such as impressions of rainforest panpipes, tense bell tones, guitar-like plucks and dark, evolving ambience. If you’ve ever been excited by the lush pads of a Korg workstation, these will blow your mind!

When you begin digging into the forest mulch, the parameter meanings quickly fall into place. Blossom increases the tendency towards generating high-pitched grains (up to two octaves above the source) while Flourish influences the selection of the next grain — at high values it’s entirely random. Age adds reverb with delay but Flood adds a deeper, wetter convolution reverb. Both together can be overkill but the results are wonderful!

Sun and Shade are provided to weed out deeper and higher components like the cleverly-named tone controls they are. Wither acts like a decaying grain envelope. Tangle and Bloom relate to the modulation, speed and length of the grains — tweak them for shifting, sparkling atmospherics. The top control is Volume and, when turned down, you won’t even hear the original sound, just an evolving ecosystem of shimmering audio fragments.

From a small pool of samples (around 200MB), Sonic Forest begins with general twangs and scrapes, hits that could be mallets or thumb-pianos and textures somewhere between a koto and marimba. Its bowed tones switch from sinister in the low ranges to breathy and evocative higher up. With on-board effects to process these sources — or the complete output if desired — Sonic Forest would be a good addition to any ethnic or world collection. Factor in the stunning granular engine, the giveaway price of $20 (25 percent of which is donated to charity) and — assuming you have the full version of Kontakt — I can’t think of one reason not to snap it up!