Shreddage might sound like a Heston Blumenthal recipe involving Shredded Wheat and cabbage, but it’s actually a Kontakt-based sample engine from Impact Soundworks. So far, there are versions of Shreddage for drums, bass and guitar, but this review is of the latest incarnation, which has been built using the sound of a classic Ibanez guitar and is aimed at hard rock and heavy-metal exponents. The products predecessor, called simply Shreddage 2, is described as having a full and dark tone and was created using an unspecified American guitar. Relative to that product, the IBZ version offers a thinner, brighter and more aggressive sound, and also benefits from a redesigned interface. 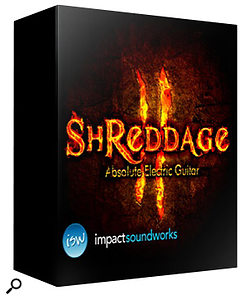 IBZ is remarkable for having a huge number of controls which are spread over several menu pages. The page the user first sees is called Perform, which features a virtual fretboard with six strings and 24 frets, plus controls for affecting the way notes are distributed across those strings and frets. Played notes are represented by red circles that appear on the strings, and if the user chooses to limit the playing range, the specified playable area is highlighted on the fretboard too. Unfortunately the Perform page has more parameters than the page can handle, so it’s necessary to toggle between Advanced and Main views to access them all.

The next page, called Articulations, is where the settings are made for things like sustain, staccato, hammer on/pull-off, pinch, tremolo, harmonics and string muting. Yet more parameters live on a page called Engine, which focuses on things like the pitch of release notes, pick noise and various other characteristics that affect the realism of the sound patches. And then there is the Advanced tab, where all sorts of tweaks can be made to things like portamento, note fade time, palm muting layers/weighting and stroke offset.

Quite sensibly, the Impact Soundworks team recorded the guitar without amps or pedals, so it is left to the user to make things heavy by engaging the processing options on the interface’s Effects page. Here there is an amplifier/cabinet simulator with plenty of EQ options and loads of level, plus a processor called Scream, which offers a slightly different kind of overdriven sound. Further intensity is to be had by switching in a compressor and there are chorus and delay effects to play with too.

Soundwise, IBZ succeeds in delivering a tight, bright and aggressive sound that’s suitable for metal, but rock musicians and sound designers shouldn’t disregard it. Reducing the preamp gain is all that’s needed to take the instrument from metal to general rock territory, for example.

For me, playing a real guitar feels a lot easier than flicking from page to page, tweaking parameters one by one and trying to achieve a realistic performance using a controller keyboard, but it’s perhaps better to think of IBZ as being a very flexible sound-design tool rather than a substitute for a guitar rig.