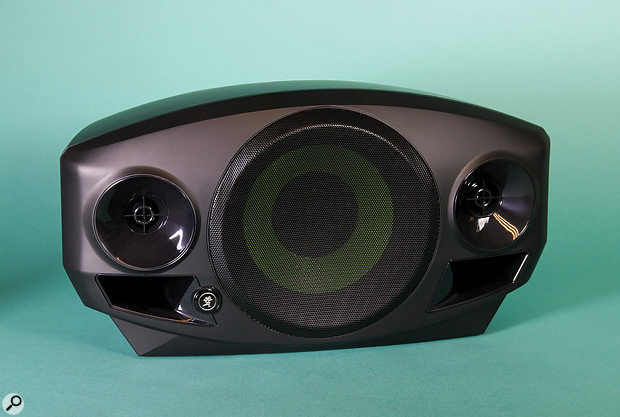 Need a go–anywhere sound system for busking, small gigs or simply listening to music on the move? Look no further!

Mackie’s FreePlay adds to the range of multi–purpose portable amplifiers that seems to have carved a significant market niche over the past few years. It is essentially a small stereo PA, styled to look somewhat like a ghetto blaster, and it can run from the included mains supply (a universal–voltage external PSU) or batteries (eight D cells or optional lithium battery pack), making it ideal for up–market busking or general indoor use where extreme volumes are not required. Apparently the lithium pack can run the amp for up to 10 hours, which is impressive given the power of this little beast. The casework, measuring just 241 x 452 x 231 mm, is moulded from rigid plastic and has a large carry handle shaped into it. The overall weight is a mere 5kg.

The FreePlay has built–in Bluetooth to facilitate both music streaming and remote control, which is useful for general music playback and for accessing backing tracks. However, without the Mackie FreePlay Connect app for the iPad, iPhone or iPod Touch 2, the onboard three–band EQ can’t be accessed and your effects will be restricted to four presets. In addition to the effects there’s also a feedback destroyer, which can be activated or reset without using the app.

The physical form factor of the unit makes it suitable for use on a desk or table, but it can also be placed on a pole mount, or angled up for busking (or even as a small stage monitor). An eight–inch woofer provides the low end and much of the mid-range in mono, while two horn–loaded one–inch drive units on either side are fed from separate amplifiers in stereo. Connections and controls are all on the rear panel, and when the unit is powered up, there’s an illuminated green Mackie ‘running man’ logo on the front panel.

In all there are three possible inputs: one stereo aux input, via either a 3.5mm mini-jack or Bluetooth stream, and a pair of main channels. Each main input is on a ‘combi’ connector providing the option of connecting a mic via the balanced XLR or a line signal (balanced or unbalanced), or an instrument via the quarter–inch jack socket. An overload LED shows red when the input level setting is getting close to clipping. The aux mini-jack overrides the Bluetooth feed when connected, and the level may be controlled from the panel or via the app.

A large 15–stage horizontal bargraph display on the rear panel reflects the settings being adjusted. A ‘Mon Out’ connection, sourced after the master fader and controlled via the rotary encoder or app, takes the mixed signal and makes it available to an external device such as a powered speaker. This is clearly handy in situations where you need more level or you need to spread the sound. There’s a battery warning function (the running man turns red when there’s power only to run the mixer but not the audio amplifiers), but this works only for the optional rechargeable lithium power pack.

To adjust a channel, it must first be selected using the Channel One, Two or Aux buttons, after which the rotary encoder may be used to change the value. Once the adjustment is complete, the display reverts to ‘Main’ after a few seconds. If you hold down either the Channel One or Two buttons for a few seconds until the white meter LEDs turn green and the words ‘FX send’ illuminate, the encoder function changes to adjusting the effect send level for the selected channel. If you’re running the app you can also add reverb to the aux input, though that’s not something you would normally do if using that input for music playback. 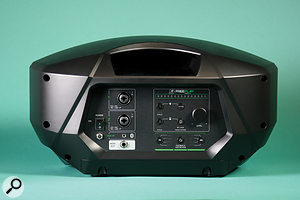 The rear panel allows you to access various EQ and effect presets, engage the feedback destroyer, and adjust the main level — but more detailed tweaking can be achieved via the Mackie FreePlay app.There are four instantly selectable effect types (two reverb or two delay) that can be stepped through using the FX button, though using the app extends the choice to 16 effects types comprising reverbs, delays, chorus and combination settings, as well as allowing the effects send and return levels to be adjusted remotely. There are also four preset master EQ voicings labelled Flat, DJ, Soloist and Voice, which are panel selectable, but each channel also has its own three–band EQ that can be adjusted only by using the FreePlay Connect app.

The anti–feedback system seems to be similar to that used in Mackie’s current range of PA speakers, where turning it off clears the filters. When active the filters are triggered by feedback at specific frequencies, whereupon each filter applies a narrow cut to kill the feedback.

An Aux/Bluetooth button is used for Bluetooth pairing with a suitable phone or tablet, and also for selecting the aux input for adjustment. The factory default settings can be restored at any time by pressing and holding the Main, Channel Two and FX buttons simultaneously.

The app has a similar look and feel to the Master Fader app used to operate Mackie’s wireless live–sound mixers, but of course it is somewhat simpler, which means that even a phone is big enough to use it. The main view shows faders for the two main inputs, the stereo aux input and the effects return, and each has a mute button above it. Regardless of which view is selected, the master output fader is always shown on the extreme right, and again this has a mute button above it. The three channel faders have little mixer logos below them that access the effects send and the three–band EQ for that channel. You can swipe this page sideways to get to the FX/EQ pages for other channels without having to first return to the main mixer page. Tapping the mixer icon below the channel fader on the left of the page gets you back to the mixer view. 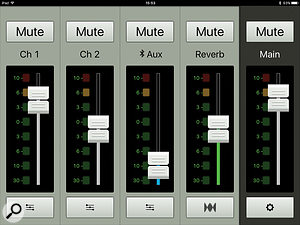 The FreePlay app’s ‘main’ mixer screen.The effects send fader has a different icon below it, which, when tapped, brings up the page showing the 16 delay/reverb/chorus effects, where the currently selected one is illuminated in green. I’d hoped for a tap–tempo button here to control the delay times but I didn’t find one. Nevertheless, there are some useful vocal treatments from various sizes of basic reverb and echo/delay to a nice rockabilly slapback.

A settings icon below the master fader brings up a page headed by three tabs, the first of which shows the four voicing curves and allows any one to be selected. For vocal use I found the Solo and Voice settings worked best, as the lows are rolled off to avoid popping and the highs are boosted to add a bit of sparkle. The next tab accesses the feedback destroyer, while the third is an ‘About’ page where you’ll find the app version number, Bluetooth version and links to support, documentation and instructional videos.

Once I’d downloaded the free app to my antique iPad, it was a simple matter to pair the Bluetooth and take control remotely. The little speaker can get pretty loud as a vocal PA, with good projection and clarity, and also works fine for streaming music at modest levels, whether for fill–in music, backing tracks or software instruments played from your mobile device. The quoted maximum SPL is 114dB, and you might be surprised to learn that the total power-amp capacity is rated at 150 Watts with a peak capability of 300 Watts. Class–D circuitry is used to minimise both weight and heat. The –3dB points are at 80Hz and 20kHz, and the crossover between the mono woofer and the two mid/high drivers is set at 3kHz. 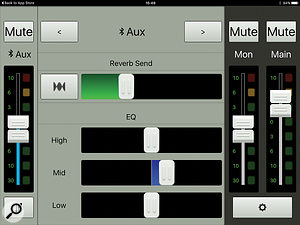 Each channel has access to its own effects send and three–band EQ.The stereo image doesn’t seem to have been artificially enhanced in any way, so the imaging is limited by the distance between the two horns, and also by the lower part of the spectrum, up to 3kHz, being summed to mono. It’s fair to say that you don’t get the same deep bass that you might from a larger system, but then that’s to be expected from a compact unit. There’s still enough low end to make music playback satisfying though, as long as you’re not expecting studio monitor fidelity.

In common with many similar devices, the designers have not seen fit to include a storage compartment for the external power supply — which would have made it less likely to be left behind. There’s no tap–tempo facility and also no way to make use of those three–band channel equalisers without having the app running and the Bluetooth paired up. I also had issues on a couple of occasions where the Bluetooth link was working fine but the app insisted on running only in demo mode. The solution to this was the good-old computer fix of ‘turn it all off and back on again’!

There’s a lot to like though. The unit is compact, it produces a semblance of stereo, it is adequately loud and the four voicings really do work to optimise the general tonal balance, especially if you plan to use it as a mini vocal PA or small-venue personal monitor. It handles vocals particularly well and with good clarity. The anti–feedback helps maintain maximum level in difficult situations, though it may affect the tonality slightly, while the app makes it very easy to remotely control all the functions except the power switch, as long as you stay within Bluetooth range — which can be as little as three or four metres. Though the reverbs won’t cause the Lexicon or Bricasti guys to lose much sleep, they work just fine for vocals.

So, Mackie’s FreePlay does pretty much as claimed and I can foresee a lot of uses for it in education, presentations, coffee-shop gigs, garden parties, busking and jamming on the beach. It could also make a useful personal monitor for larger gigs.

A useful portable amp with a number of general-purpose applications.