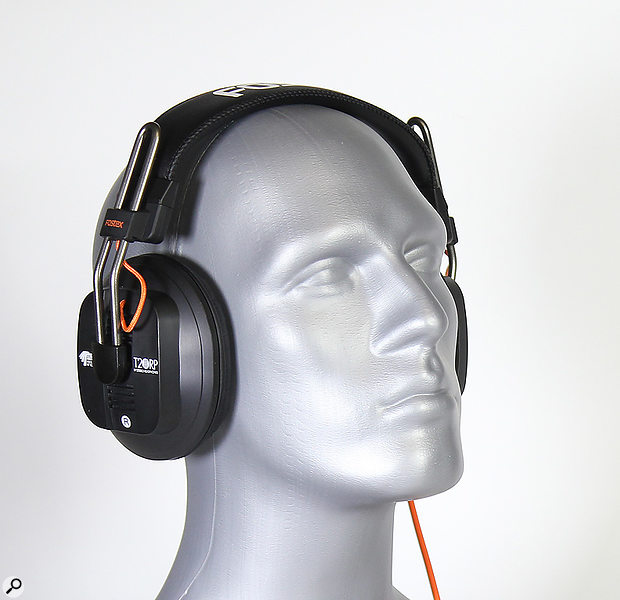 Fostex have been making planar magnetic headphones since before they were cool. How do their latest models fare?

Could it be that planar magnetic headphones are undergoing a revival? Prior to last year, Sound On Sound had never once been sent a pair for review. We broke our duck with the superb Audeze LCD-Xs; hot on their heels arrive no fewer than three models from Fostex’s T-series, and we’re hoping to get our mitts on Oppo’s PM-series ‘phones in the near future. For an overview of the technology, let me refer you back to our review of the LCD-Xs in October 2015: www.soundonsound.com/sos/oct15/articles/audeze-lcdx-el8.htm.

The Fostex models under review here are the open-backed T20RP MkIIIs, the closed-back T40RP MkIIIs and the ‘semi-open’ T50RP MkIIIs. As the model designations would suggest, all are evolutions of Fostex designs that have been around for quite a while in one guise or another. On all three models, a band of horizontal bars runs down the back of each earcup, and sure enough, on the T40RPs, the gaps between these bars are sealed, while those of the T20RPs are open, with the T50RPs being somewhere in between. Apart from the printed model name, this is literally the only difference that’s apparent to the naked eye.

Whereas Audeze and Oppo are both premium brands, all three of these models are aggressively priced, putting planar magnetic (or, as Fostex call it, ‘isodynamic’) technology within the reach of most studio owners. As a consequence, the packaging is not what you’d call lavish: each pair comes in a cardboard box, with a choice of two straight cables. The longer of these terminates in a quarter-inch jack, the shorter in a mini-jack, and they attach to the ‘phones themselves by a mini-jack which twists into place at the back of the left earcup. The semicircular headband is attached to thick metal bars that emerge from the large elliptical earcups. Although this arrangement permits all the freedom of movement you’d hope for — the earcups rotate laterally and vertically, and slide up and down the headband — and the ‘phones themselves are no heavier than many conventional designs, they can’t in all honesty be described as ‘comfortable’. Not by me, anyway. Your mileage may vary, but a quick Google confirms this is a common complaint about the T-series ‘phones. Build quality looks and feels robust, but the review trio was let down by a fault with the T50s, where the right channel often dropped out.

Like any design philosophy, planar magnetic technology has its own typical strengths and weaknesses. Among the former are low distortion, accurate presentation of transients, a smooth frequency response in the mid-range, and a tendency to be unfussy about headphone amps. Among the latter are low sensitivity and a relatively muted high-frequency response.

The T-series headphones epitomise pretty much all of these qualities, and in a sense, that’s hardly surprising. Fostex have been the flagbearers for planar magnetic designs since the ’70s, so perceptions of the strengths and weaknesses of the technology as a whole are derived in large part from earlier versions of these very ‘phones.

When I’ve heard open- and closed-back ‘phones within other manufacturers’ ranges, they usually stand out more for their differences than their resemblances. For example, Audio-Technica’s open-backed ATH-R70xs sound, to my ears, very unlike their closed-back ATH-M70xs; likewise, the open- and closed-back versions of Audeze’s EL8s have a jarringly different tonality. That’s not the case with this trio of Fostex models, which all sound remarkably similar to one another. 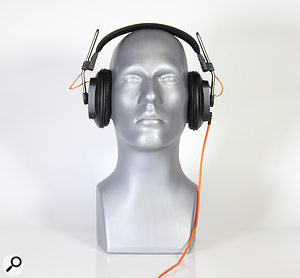 Visually, the three models in the range are all but indistinguishable — other than their printed model names, and the differing slot sizes on the backs of their earcups.This, I presume, is down to the physical similarities described earlier. Whereas other open-backed headphones typically open up the back of the earcup as much as is physically feasible, to make them as close to acoustically transparent as possible, the T20RP and T50RP models provide only slots totalling a couple of square centimetres’ area through which sound can escape. One consequence is that both models sound really quite similar to the closed-back T40RPs. Another is that they are by far the least ‘leaky’ open-backed ‘phones I’ve ever heard; you can happily listen to music at reasonable levels on these without bothering other people in the same control room, lounge or railway carriage. That is, if you can find a portable music player which will drive them to reasonable levels: these are not sensitive ‘phones, and depending on how loud you like to mix, you may find it a struggle to work on them without a mains-powered headphone amp.

Planar magnetic technology has much in common with the ribbon technology used in mics and some loudspeakers — indeed, Fostex once manufactured a range of ‘printed ribbon’ mics which used planar magnetic drivers — and many of the adjectives that are typically used to describe ribbon mics are also applicable to the T-series headphones. Their chief selling point is a prominent, full and rich mid-range, which is pleasantly smooth and free from obnoxious resonances and peaks. They don’t exaggerate transients, but neither do they smear them; and although I suspect there’s not much going on above 15kHz or so, they present enough high-frequency information to be useful for most mixing purposes, and the roll-off is benign and graceful. In other words, if you can cope with the relatively low sensitivity, most other design compromises shouldn’t be a problem to the audio engineer; there’s none of the artificial treble boost, bass hype or euphonic distortion that can make some dynamic ‘phones superficially attractive but problematic in the studio. 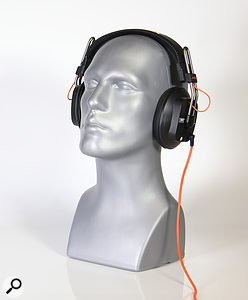 The mid-range sounds remarkably consistent across the three models — the chief difference between them lies at the low end. The T20RPs’ packaging heralds their ‘deep bass’, and they definitely pack more of a punch than their siblings in this department. To my ears, though, this comes across more as a hump in the 100Hz region than as true sub-bass extension. If I had to pick a favourite among the three, it would probably be the ‘semi-open’ T50RPs, which seemed to be a bit more present in the upper-mid range than the 20s, while slightly more refined than the 40s. However, as I’ve mentioned, the differences between them are relatively insignificant compared to what they have in common. They don’t have the stunning realism, endless bass response and immersive quality of the Audeze LCD-Xs, but it’s hardly fair to compare them with a pair of headphones costing more than 10 times as much.

At this sort of price, you can get more comfortable ‘phones, and more sensitive ones, but in purely sonic terms, these might be my number-one choice for mixing. If planar magnetic headphones really are undergoing a revival, then personally, I’m all in favour!

Fostex have been making planar magnetic headphones since the ’70s, and their designs have a cult following in hi-fi circles. As a result, there’s a thriving subculture of ‘modding’, which sees people employing everything from Plasticene to adhesive felt to change their damping and venting properties. Intrepid T-series owners have also found that other manufacturers’ earpads can be affixed in place of the stock ones, which might improve comfort levels. It being incumbent on a reviewer to return things in more or less the state in which they arrived, though, I felt I probably couldn’t start stuffing cotton wool into the review models.

Fostex’s T-series ‘phones represent an attractive alternative to conventional dynamic headphone design, offering most of the qualities that studio engineers need at a very tempting price.