In their new PX series of monitors, Fostex have chosen to use DSP to provide a range of useful configuration options.

Fostex’s recent launch of the PX5 and PX6 active nearfield studio monitor loudspeakers marks a move away from their more traditional rectangular boxes, to a modern-day design paradigm and the introduction of DSP functionality into their monitor line-up.

Other than the physical difference between the PX6’s 6.5-inch bass driver compared with the PX5’s 5.2-inch equivalent, there is nothing to choose from, cosmetically, between the two units. Their black, moulded front baffles have the integral waveguides surrounding the drivers, the front-facing bass reflex ports and the sculpted, rounded edges that are becoming almost ubiquitous these days. The cabinets themselves have a black vinyl-like covering and this, coupled with a reassuring chunkiness — the PX5 weighing in at 5kg and the PX6 at 6.95kg — gives both of these monitors an aura of professionalism.

The PX bass units are a new design from Fostex’s Crimson series, and both feature a synthetic aramid (aromatic polyamide) fibre cone that is impregnated with resin to enhance rigidity. Aramid fibres are extremely strong and heat resistant, with Kevlar and Nomex being high-profile examples. By a strange coincidence, the polyester diaphragms of the soft-dome high-frequency drivers are laminated with a crimson urethane film, so we end up with black Crimson woofers partnered with crimson-coloured tweeters.

The monitors’ integral PWM amplification is described as “digital” (I do wish that manufacturers wouldn’t do that), and delivers, in the PX5, 18W to the tweeter and 35W to the woofer. The PX6 gets a corresponding 28W and 50W. Frequencies are split between the PWM amplifiers by what Fostex call a Digital Network Filter, an FIR (Finite Infinite Response) type dividing network. Without getting into the details of FIR filters, their essential quality is that they can be easily designed to be essentially linear in response and to have no effect on the phase of a signal passing through them. Combined with precise DSP-based time alignment for the bass and treble drivers, these qualities give the potential for extremely accurate imagery. This type of crossover/amp/driver setup is not unique to Fostex, but they have chosen to implement some of the other possibilities made available by this approach in interesting ways. 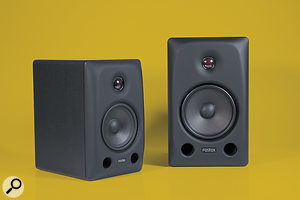 As with their front baffles, the rear panels of the PX5 and PX6 are identical apart from size. Their most important feature is a multi-turn rotary control surrounded by a ring of 11 LEDs, which sits above a three-position slide switch and its associated LEDs. The combination of the rotary control and the switch allows you to access six separate functions, of which the parameters of five can be stored.

The first of those functions is a 44-step level adjustment — 22 coarse steps plus a 22-step trim. The level function is selected via the leftmost position of the three-position switch, and the active function is indicated by status LEDs above the switch, whilst the levels themselves are displayed on the LED ring. Any changes in the levels (indicated by a flashing status LED) can be stored via a long press of the control knob.

Moving the switch to its right-hand position activates the tone function, which allows you to optimise the response of the PX5 and PX6 to your own taste in your studio. Treble mode allows you to adjust the high-frequency response by ±3dB in 0.3dB steps, and bass mode lets you lower or raise the low-frequency roll-off over a 20-step range.

The final two rear-panel functions come into play when the PX5 and PX6 are being used with a subwoofer. Both monitors are equipped with a phase-adjustable 36dB/octave high-pass filter at a cut-off frequency of 85Hz. Engaging the filter (via another slide switch/rotary control push combination) turns off both the tone-status LEDs to indicate that the filter is enabled.

Like me, many of you will have spent at least some time crawling around your studio trying to find the optimum position for the subwoofer in a 2.1 or 5.1 system. In its perfect world, the PX5/PX6 manual shows both subwoofer and speakers positioned equidistant from the listening position, front centre for 2.1 and rear centre for 5.1. In reality, the sub — together with the surround speakers in 5.1 — may end up further away than is ideal. The 20-position phase adjustment in the high-pass filter is designed to compensate for a listening position distance offset between the front speakers and sub in 2.1 (and surrounds in 5.1), of up to 2m in 10cm increments.

As in all good active monitors, both PX5 and PX6 have a ‘soft’ switch-on that eliminates any nasty thumps on power-up or return from standby. The XLR, jack and RCA audio connections means that these two speakers can interface with the analogue outputs of any console, preamp or monitor controller.

Having run the pair in for a day or so, I fed them with a wide selection of acoustic, electric and electronic music ranging from CoH and Deadmau5 to some recent releases from Finland recorded in the folk music department of the Sibelius Academy, including the intriguingly named Esko J rvel Epic Male Band (who are well worth checking out).

As you would expect from its smaller bass driver and less-powerful amplification, the PX5 is probably best in a closer nearfield application. For its size, it has a well-extended bass response and a good level of detail and clarity in its treble frequencies. However, with the tone controls set flat in their centre position, the PX5 lacked some of the forensic clarity in the mid-range that I tend to look for in monitors. Although the basic sound of the PX5 was warm and pleasant to listen to, it seemed to me that the bass, which could sometimes feel a bit tubby, was tending to overpower the mid-range. 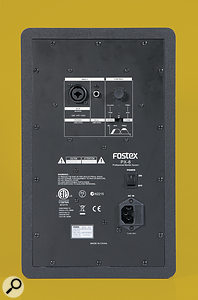 The rear panel of the PX-series speakers houses the audio inputs as well as the controls for user adjustment of the built-in filters.Increasing the level of the treble control (which acts above approximately 1.5kHz) by around 1.5dB and raising the bass roll-off frequency upwards gave a much better overall balance to the sound, at the expense of some bass extension — which to me was a very worthwhile trade-off.

The PX6 is, to me, a significant step up from the PX5 in performance terms. Its higher-powered amplification and larger bass driver enables the PX6 to deliver a much bigger sound than its more diminutive sibling. I was, as with the PX5, immediately impressed by the bass extension and with the clarity in the higher frequencies. Once again though, with its tone controls centred, I felt that the low end was swamping the mids, giving the impression that the PX6 was somehow lacking definition in its mid-range. The bass of the PX6 showed an improvement in articulation over the PX5, although it still lacked some of the authority that I would have liked. Again, their clear, warm sound made for a comfortable listening experience, which isn’t actually what I personally want from a studio monitor.

Bringing up the treble control by 1dB or so and raising the bass roll-off frequency helped the PX6 to give a performance that was much more along the lines of what I look for in a monitor, but this time I didn’t feel that I’d suffered any loss in the bass.

Although I didn’t have a sub to enable me to fully evaluate the benefits of the phase adjustment in both models’ high-pass filters, with the PX6s next to my own 5.1 front speakers and the PX5s beside my rears it was simplicity itself to set the necessary adjustment between the two sets of speakers. Activating the high-pass filter also gave, in both the PX5 and the PX6, a well-balanced sound that should work well in combination with a suitable sub.

There were a couple of things that irritated me about the PX5 and PX6. Obviously, cost considerations have led to all the setup controls being on the rear panel. This is all very well for controls that, once set, are not going to be touched, but the rotary control knob — which is also used to manually put the speakers into standby and to restart them from manual or automatic standby — really should be on the front. Almost as importantly, having the power switch on the rear is a pain if you are someone like me who routinely switches off monitors when not in use.

There was much to like in the Fostex PX5 and PX6 active monitors. The detail and articulation in their mid-range and treble regions was impressive, and enabled them to create a solid stereo soundfield with a strong sense of positioning.

In both models, the bass was well-extended, but neither seemed able to produce quite the level of articulation that I look for in that region. Set flat, both had an overall warmth and clarity that, although producing an enjoyable listening experience, didn’t quite manage to deliver the forensic accuracy that I like in my monitors. Having said that, the effective and well-implemented tone function enabled me to bring both the PX5 and PX6 much more closely into line with what I like to hear.

My personal taste leans more towards the PX6, but monitors are a very personal choice and both the PX5 and PX6 are worth auditioning if you are looking for active nearfield monitors in this price bracket.

Fostex have dropped the PX5 and PX6 into an area where a good few brands already have established products. At around the PX5’s price you can find similar offerings from the likes of Adam, Eve, KRK, PreSonus, JBL, Tannoy and Yamaha. Move up in price to PX6 territory and you’ll find further alternatives from several of the aforementioned manufacturers, as well as from Avantone, Event, Focal, Genelec and Dynaudio.

Fostex’s new PX5 and PX6 active nearfield monitors have quite a lot going for them. Both the on-board EQ and phase-adjustment functions allow accurate setup in stereo, 2.1 and 5.1 systems, and their clarity, warmth and excellent imaging make them well worth auditioning.