It’s neither cheap nor perfect — but there are still reasons to love this device!

Funky Junk have always done custom engineering jobs, but they’ve recently released some products of their own — an SSL-inspired bus compressor with ‘gold can’ Dbx VCAs and this, the 3202 Summing Mixer, which combines a passive summing mixer, with 32 inputs arranged in 16 stereo pairs, and a passive monitor controller.

The audio signals, delivered to the 3202 via AES59 D-sub connectors, are voltage-summed to a stereo bus which feeds a stereo Class-A preamp, with EA2622 (API 2622 equivalent) input transformers and discrete op amps. A six-position Drive switch sets the preamp’s output level, and the stereo-bus signal is routed via a three-position selector into one of three pairs of output transformers: a Marinair-period Neve LO2567-type (Position N), a Lundahl LL1517 (Position T) and an API 2503 equivalent (Position A). The large detented rotary control knob on the left of the front panel is the mixer’s stereo master ‘fader’, and its output, displayed on a pair of massive VU meters (with 0dBVU switchable between +4dB and +8dB reference levels), feeds the Mix Output and, via the Rec(ord)/Mix switch, the passive monitor-control section.

A pair of balanced XLR L/R stereo inputs to the summing bus are always live, and bring the total number of audio inputs to 34. A switchable stereo XLR mix insert provides for signal processing prior to the transformers. More interestingly, you can bypass the internal preamp with any balanced stereo mic preamp via the switchable L/R Ext(ernal) Pre(amplifier) balanced XLR insert.

The Rec/Mix switch is, at least for my workflow, slightly unusual. In its Mix position, everything is as I’d expect: all 34 inputs go to the Main Mix and monitor outputs. In the Rec position, inputs 5-32 (plus the Ext pair) continue to feed the Main Mix, but the Monitor output switches to inputs 1+2 only, bypassing the transformers, whilst inputs 3+4 get routed to the Cue bus. This feels a bit restrictive, not only because I might not want to have my first four channels of D-A conversion tied up in monitoring, but because as soon as you hit Mix these inputs appear on the summing bus. I can only surmise that the designer expects me to stay in Rec mode until I’ve finished tracking and to think about mixing later.

The monitor section is pretty much as I’d wish: passive, high-quality and with the features I need. There are two pairs of monitor outputs, Main and Alt. A Sub output with an 80Hz low-pass cut-off is always active, in parallel with both monitor outputs. The Control Room volume levels are set via the second detented big black knob, and further switches enable you to monitor a two-track return, to dim the monitor level and to check mono compatibility. 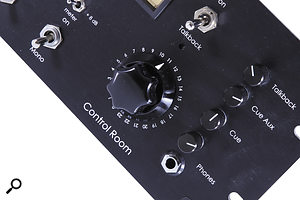 Not just a summing mixer, the 3202 doubles up as a source selector and monitor controller.As mentioned earlier, the 3202’s single stereo Cue bus is fed in Rec mode by inputs 3+4, and these can be augmented by an external stereo source, whose contribution is controlled by the Cue Aux pot. A non-latching front-panel switch activates an almost-invisible talkback mic, but a rear-panel jack socket caters for a momentary footswitch. The level of the talkback mic and overall Cue level are, like the Cue Aux level, controlled by small front-panel pots. Additionally, a switch under the meter routes the main mix to the Cue for studio playback and the like.

Hooking the 3202 up my DAW’s 16 stereo pairs of D-A converters was, courtesy of the D-subs, extremely simple. The most time-consuming part was setting up extra subgroups in existing recording projects! When mixing multitracks and listening to reference mixes, the first thing I noticed was that I couldn’t bypass the input and output transformers (for A/B comparison) other than by paralleling the mix output from my DAW to a pair of converters connected to the two-track input. That was fine, except that switching the two-track out caused a noticeable switching thump. Speaking of switching noises, the Control Room level control clicks slightly every time you move it through a detent. It’s nothing serious, as you won’t normally hear it while music’s playing, but it’s vaguely annoying.

While there’s nothing complex about a high-quality, balanced, passive, stereo summing mixer, this device is about so much more than that — and ‘it’ all starts to happen when the signal reaches the output section. In general, the more dynamic the programme material, the more noticeable the effect of the transformers. Turning up the Drive control seemed to me to change the harmonic content inside a mix. What I noticed most of all, as did all the musicians I roped in to my listening tests, was the apparent widening of the stereo field, whichever of the three output transformers was used, and at all input and output levels. Importantly, this perceived widening doesn’t sound artificial.

The N position, with its Neve-style output transformer sounded, well, fairly Neve-ish, with a thick, fat bottom end, a detailed mid-range, a clear top-end and an overall sense of warmth and sweetness. I cut my engineering teeth on an early Neve 16-4 console, and listening to some of my recordings from those days it seems there’s more than a hint of that old desk’s sound in the 3202’s N position.

The T position, with the Lundahl 1517 transformer, cleans up the bottom end and hardens up the treble to give a very attractive sound. For quite a while, that was my favourite setting. T stands for Trident, I suppose. This position is the best one for tracks that feature an all-acoustic line-up; there’s something about the frequency response curve that just seems to suit my preferences for the sound of wood and strings.

Position A, with its API-style 2503 output transformer being fed by the equivalent of an API 2206 transformer, should be the closest sound emulation on the 3202. Never having worked on an API console, I’m afraid I don’t know how accurate it is, but this position would be my go-to 3202 sound, even if the T-setting pips it on all-acoustic tracks. Somehow, the bottom end sounds more open, the mids are that bit clearer (and perhaps a bit more forward?) plus the treble sounds clean and clear.

As a summing mixer and mix-sweetener, the 3202 sounds superb and its three pairs of output transformers each have a very distinct character, each producing an excellent sound. Being able to switch between six Drive levels and three distinctly different sonic characters soon becomes addictive. Whenever I couldn’t quite get what I wanted, substituting one of my own stereo mic preamps for the internal one usually got me where I wanted quickly. The differences the transformers make to a signal are certainly subtle, but they’re noticeable: they’d definitely carry across into the final production master, though whether they’d survive the ravages of MP3 encoding is another matter.

I’m less impressed by certain aspects of the 3202 as a monitor controller. I didn’t like the Rec/Mix monitor-source switching, and there was no way to hear the Cue bus alone. Neither was I impressed by the thumps or the switching noises I’ve discussed. Finally, I’d want to be able to disable the Sub when monitoring through the Alt Speaker.

Yet, for all that, I can see a couple of ways to work around both the Rec/Mix switching setup and absence of the Cue bus on the headphone and monitor outputs. I can also live with the switching noises, and I don’t need a sub. So, having got the moans out of my system, I’d still be happy to buy a 3202 for its sound alone. The asking price is not inconsiderable, but there’s something about the 3202 that makes me love it. If you’re looking for a retro-feeling, high-end analogue summing mixer and monitor controller, the 3202 needs to be on your audition list.

There are plenty of summing mixers around but few with monitor control facilities. SSL’s Sigma is similarly priced. The Coleman Audio RED 48 could make sense if you need more (48) inputs and have a smaller budget. If you need fewer channels, the Neve 8816, with its more comprehensive monitor controller, is a real option.

The high asking price is justified by the tonal flexibility offered by this device, courtesy of its switchable transformer options and variable drive settings.