Does DM307 live up to Heavyocity’s reputation for seriously good beat creation tools?

Heavyocity have a small, but very highly regarded, catalogue of virtual instruments. Having started with Evolve and subsequently released the Aeon Collection and Damage, these tools have found homes in many film, TV and game composers’ studios. Dave Stewart was suitably impressed with Damage in the April 2012 issue of SOS. This Kontakt-based sample library focused on hard-hitting percussion from both traditional and non-traditional sound sources. The end result, presented as both loops and single hits, and with a custom-designed Kontakt front-end boasting all sorts of brilliant tools for manipulating the samples, was simply first class. And while, perhaps, designed with media composers in mind, Dave was also keen to point out that the samples could just as easily work in modern pop production.

Heavyocity’s latest product is DM307, which they describe as a tool for modern groove design. The blurb suggest that DM307 will also appeal to media composers, but the more drum-oriented slant also suggests this is something for music producers. As with Damage, DM307 features loops and single-hit samples and, while the Kontakt front-end has it’s own look, it does share much of the functionality of Damage. So, does DM307 live up to the high standards set by its predecessor?

DM307’s samples are derived from modular synth drums, live percussion and classic analogue drum machines. In total, the library contains 7.5GB of uncompressed samples (although this only uses 4.8GB of hard-drive space with NI’s lossless compression) with more than 3600 samples spread across 1500 plus presets. 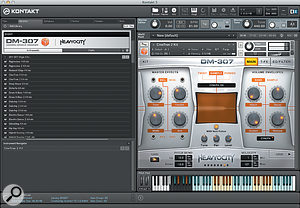 The library is a download-only product and will work quite happily with the free version of Kontakt Player or, as I used for the review, the full version of Kontakt 5. Installation and authentication follows standard practice for Kontakt and I had no problems with any of these steps.

While DM307 is built upon this extensive collection of loops and single-hit samples, it is various preset structures and the Kontakt-based sound manipulation tools that go a long way to defining what the instrument is about. I’ll come to the Kontakt interface in a minute, but let’s start with the library structure.

At the top level, the presets are organised into instruments and multis, with seven instrument and two multi types. Many of the individual samples will appear in a number of presets, but the way they are presented, and what you can do with them, will be different in each case. 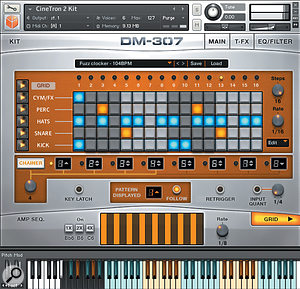 The Grid editor provides a powerful platform for using the Style Kit and Groove Kit presets.For example, the DM307 Style Kits instrument presets are each built on five groups of sounds: kicks, snares, hats, percussion and cymbals/FX. Within each kit, you get 12 different sounds in each group (12 different kicks, 12 different snares, etc.) mapped across five consecutive octaves of the keyboard. While you can trigger any of these sounds via the appropriate MIDI note, as we will see in a minute, the interface includes a five-lane grid editor for creating step-based patterns using these five groups of sounds. The Kit Groove instruments are based around the Style Kits but also include a series of patterns (for that five-lane grid editor). There are plenty of these presets and they are organised into genre-based themes covering Drum & Bass, Dubstep, Electronic, Hybrid Scoring, Industrial Edge, Latin Organic and Rock.

In both these instrument types, the sounds themselves offer a huge variety, from fairly conventional acoustic drums through to electronic and analogue synth drum sounds with and without processing. I could easily imagine the basic sounds working in contemporary film score, almost any style of modern electronic dance music and through into cutting-edge electronica. 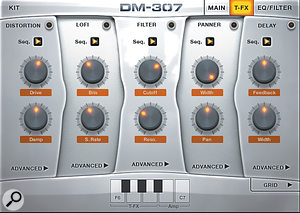 The Trigger FX options are just one element of the creative beat-manipulation options provided by DM307.The Elements Kits each take a specific sound group — kicks, hats, snares, for example — and map a collection of sounds of that type across five octaves. The Impacts and FX group does something similar but with a series of much more unconventional sounds such as pitch dives, reversed hits, sweeps, sirens, risers and analogue hits. The Standard MIDI Kits map a selection of the Style Kits in a fashion suitable for standard third-party MIDI drum loops or a MIDI drum kit.

The Loop Menus group is also genre-themed, covering Electronic, Ethnic Mashup, Hybrid Scoring, Industrial Mashup, Urban Mashup and utility Elements. Each preset contains multiple octaves of mapped loops, some focused on one instrument type (snares, kicks, etc.) while in others you get a mixture of different single-instrument loops. The latter are great fun to experiment with; just hit a combination of keys and see what rhythmically interesting drum and percussion performances just pop out. The ease with which you can instantly create some really interesting and fresh electronic beats is just a touch embarrassing.

The final instrument type is the Single Loops. These presets contain a single, beat-sliced, loop mapped across the MIDI keyboard. The Advanced Loop section of the interface includes a ‘MIDI To Host’ button so you can simply drag and drop a MIDI phrase to your host DAW to trigger the loop and editing so you can create as many variations of the original loop as you desire.

Finally, there are also two sets of Multi presets — Performance and Production — that organise the instrument presets into Kontakt bundles. Both sets contain five instruments, each configured for a different MIDI channel, but the Performance Multis have been assembled by named artists.

As mentioned earlier, the second key creative element comes from the options for sound manipulation provided by the Kontakt interface. In a review of this length, it’s difficult to do justice to just how many ways you can mangle these sounds, but there are many. Certain features replicate those offered in Damage, but there are additions here and the interface has a more modern vibe. For example, you get the rather wonderful Punish and Twist controls in the main part of the interface, a series of master effects, volume envelopes that can be applied at the ‘bank’ or individual sample levels, trigger effects that can be applied in real time from your MIDI keyboard to add distortion, filter, panning, lo-fi and delay effects, EQ and filter effects that can be applied at sample or ‘master’ level and a filter LFO.

Perhaps the feature worth a few additional words is the Grid. This provides a five-lane pattern editor for the Style Kits and Kit Grooves. Each lane relates to one of the five sound groups within the Style Kit or Kit Groove presets and you can trigger individual lanes or all lanes for playback. Within a preset, you can create up to eight different patterns and sequence these within the Chainer. 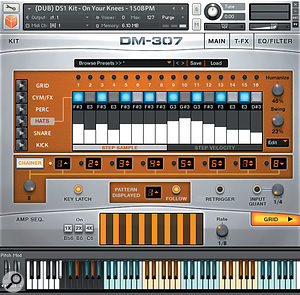 The Grid allows you to tweak both sample and velocity on a step basis.However, the fun really starts when you get into the Amp Sequencer (where you can create and apply a 16-step amplifier pattern to create some classic stutter effects) and when you switch the Grid view to show the other programmable properties for a specific lane. Here you can apply step-based values for both velocity and sample on a per-lane basis. This means that you can programme (for example) which of your 12 snare samples in the preset plays on a particular step. This is a lot of fun and the potential for creating twisted, dynamic patterns is huge.

So, we have a huge library of excellent — and very varied — drum and percussion sounds and an interface that allows you to play and manipulate those (already inspiring) sounds in a whole host of ways. It is only fair to say, therefore, that to get the best out of DM307, you do need to put in a bit of initial effort. 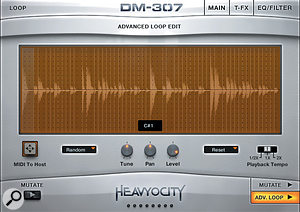 DM307 also includes some excellent beat-sliced loop options.However, that effort soon repays itself in spades. That’s not to say that there isn’t some instant gratification to be had, though; load up a Kit Groove and let the patterns play or bring up a Loop Menu preset and just randomly hit a few keys and see what pops out. Either way, it is almost impossible not to find something good within a couple of minutes. 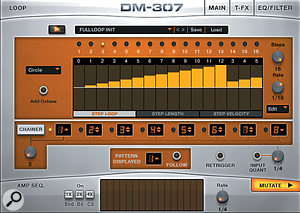 The beat-sliced loops can also be manipulated in a range of creative ways.The bottom line here is that DM307 contains a staggering amount of rhythmic potential. The sounds are fabulous and the Kontakt interface, while it takes a little while to fully explore, is an absolute joy to use and gives you masses of additional sound-shaping options. Put these things together and DM307 is an impressive package. As a source for modern electronic beats, there is a pretty endless set of possibilities here and, almost without exception, they sound brilliant.

At $299, DM307 is perhaps not a casual purchase for many. However, I’d have no hesitation in saying that it represents good value for money. And while Damage was most obviously aimed at media composers, this is a library I could easily imagine using in a wide variety of contexts from music-to-picture through any modern electronic dance genre and off into pop or rock. Whether it’s for film/TV or for straight music production, if you want to create modern electronic beats that you can tweak to within an inch of their life, DM307 is a hit.

There are a number of very good beat creation tools that might form obvious alternatives to DM307. For a more cinematic sound set Heavyocity’s own Damage would be an obvious choice. However, for a more contemporary edge, either Sample Logic’s Havoc or iZotope’s BreakTweaker. The mechanics of these last two products are perhaps different to DM307 but they are similarly priced and pitched at broadly the same sort of musical applications.

Heavocity’s DM307 develops the concept of Damage to more contemporary drum sounds for modern beat construction. For twisted beats on tap, DM307 is a sure-fire hit.