In June 2013 we looked at Project Alpha, a sound-design toolkit for cinematic music projects, produced by sound designers Daniel James and Aaron Frensley. Project Bravo picks up where Alpha left off, providing 3.6GBs of sounds for composers working in the film, TV and video-game industries.

Bravo’s interface, which has a definite cyberpunk look to it, seems to have all the same tools that Alpha had before it, plus some extra controls and features of its own, adding to its flexibility.

Bravo offers processing — in the form of a compressor and a three-band EQ with frequency, width and gain controls — and an effects section comprising a filter with low-, band- and hi-pass settings and a cutoff that is mapped to the mod wheel, a distortion plug-in called Grit, a compactor/bit crusher/noise generator, a transient processor called Punch, plus delay and reverb send effects. Elsewhere on the display is an LFO that modulates the filter and volume, not to mention ADSR controls for amp, filter and pitch envelopes. 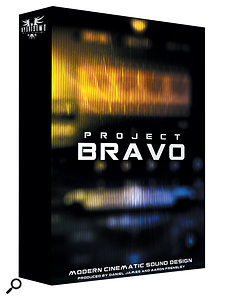 Like Alpha, one of Bravo’s most powerful tools is the sequencer section, which includes a step sequencer with 16 fully controllable steps and a gate sequencer. However, Bravo adds a third option, namely a dual-control sequencer, making it possible to set up two individual filter sequences and have them interact with one another, often in a dramatic fashion.

Another useful feature allows the user to drag the MIDI note and velocity information from the sequencer section and drop it into a DAW channel, so that, for example, a string part can be perfectly matched and layered with a complicated Bravo sequence.

The sequencer section even has its own distortion processor and, to aid performance, patterns can be saved to keyswitches and triggered dynamically.

Although Hybrid Two provide a respectable number of ready-made sounds, they also actively encourage their customers to use the interface for processing their own samples. In the Project Bravo Video Manual, which has been produced instead of a written manual, Daniel James demonstrates just how easy it is to drag an audio sample into Kontakt’s Mapping Editor and set its start and end points in the Wave Editor, after which it is ready to be mangled beyond recognition using Bravo’s sound-design tools. Daniel used a sample of his own voice, so I tried it out with a vocal sample of my own and was very pleased with how easy Bravo makes it to turn spoken words into a sound effect.

Project Alpha was a very impressive product, but Bravo offers even more. It includes more content and a better interface, yet it is on sale for slightly less than Alpha was upon its release. Sound designers are certain to find it extremely useful, not only for its presets, but also as an audio manipulation tool, and numerous composers are likely to use it as a source of inspiration for their work. Tom Flint