In February 2013 we took a look at the first instalment of Ian Boddy’s Analogue Workshop series of libraries, which dealt with sounds that, as Ian explained, were “not intended to be polite or necessarily easy on the ear”.

Its follow up, Dark Ambient, is formatted in exactly the same way, featuring 300 24-bit WAV samples and over 500 Kontakt patches accessed through an interface designed to resemble an old analogue synth. This time, though, the material is a little more atmospheric and a touch more musical. 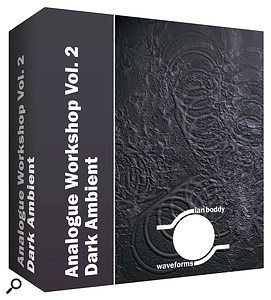 The product’s design gives its users the choice of working with WAV files or with the interface from within Kontakt. There are two interface options: the first option, Raw, has no preset processing applied and offers a blank canvas with which to start programming. The second option, Treated, has ready-made patches which can be used as is, or as a spring board for further development.

Ian has separated his sounds into a few key folders (Atmospheres, Drones, FX, Pads and One Shots), although their content is not always dissimilar.

The content of Atmospheres reminded me of Howard Shore’s score for David Cronenberg’s 1981 film, Scanners. In other words, there are plenty of thick, detuned, delayed sounds, which are frequently unsettling but strangely compelling at the same time. The material in Drones is not massively different in style, but perhaps has more tonal content.

I wondered whether the Pads folder would move more into the vast synth line territory of Vangelis’s Blade Runner, but Ian’s pads are more akin to the industrial-leaning science fiction sounds typically produced by the BBC Radiophonic Workshop for Doctor Who in the ’60s and ’70s. It must be a British thing!

Some slightly more dynamic and evolving sounds are to be found in the FX folder, which covers everything from resonating sweeps and oscillations, to roaring tunnel sounds and glitchy pulses, but again, the theme is definitely sci-fi.

Unlike the other four folders, One Shots has a set of folders of its own, with names like Deep Drums, Hats, Hits and White Noise Hits. Clearly Ian is aiming to provide some alternative drums sounds, possibly for use in experimental electronica, or for layering under more conventional drum sounds that are a little too ordinary.

As for the interface, it has a simple-to-use set of tools including a multi-waveform LFO, two envelopes, a multi-mode filter and five effects, and it enables users to quickly and easily manipulate sounds a little further.

Dark Ambient is certainly not a modern-sounding sample collection but that is its strength. If you are getting a little tired of digital synth sounds and want something raw, retro and dark, here it is. Tom Flint