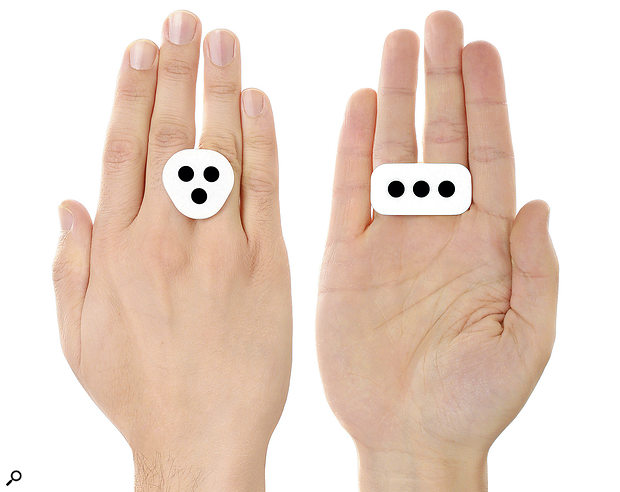 IK Multimedia’s iRing is essentially a motion-tracking device that uses the front- or rear-facing camera on your iOS device to follow the motions of two reversible finger rings (worn between the fingers rather than over them). Each ring displays a different dot pattern on its two faces, which allows both rings to be tracked at the same time. When using the front-facing camera you need to be within 700mm of the screen, while the rear-facing camera will work at distances of up to around 1.5 metres.

Compatible with the iPhone, iPad and iPod Touch, the iRing uses image-recognition to track the dot patterns on the two rings to determine their positions in three dimensions. As movement is tracked in all three axes, the two rings can control up to six parameters at the same time. Actually, it can do more than that as the software can also recognise rotation of the dot pattern on the ring. Covering and then exposing the ring can also be used as a control gesture, as can moving it out of the camera’s field of view and back into it.

Music apps that work with the iRing can be freely downloaded, but IK Multimedia are also talking to other app designers with a view to expanding the applications of the device into other areas of music and also into games or fitness products. 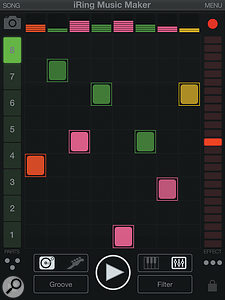 The iRing Music Maker app.For instant gratification, the included iRing Music Maker app, which is similar to IK’s GrooveMaker 2 app, enables the user to produce dance-style music using a library of music loops and pattern-driven lead and bass synths. These are all designed to work together so that music can be created on the fly, even by those with no musical grounding.

For those who have some previous experience, the iRing FX/Controller app allows real-time control over effects (up to three parameters per effect). It also functions as a MIDI controller with user-assignable parameters, so you can set it to adjust MIDI Controllers, to make Program Changes or to access other common real-time performance controls such as pitch-bend, aftertouch or even MIDI Machine Control. The iRing FX/Controller app comes with a range of DJ effects with additional effects packs available as in-app purchases for very little cost. This app also works alongside Audiobus and any Inter App Audio-compatible apps, but perhaps more relevant for serious studio users is that MIDI Controller data generated via the iRing can be routed wirelessly to your studio Mac for real-time control of projects you have running there.

The iRing comes in a small box containing the instructions and a pair of double-sided rings. The two bundled free apps may be downloaded from the App Store and activated after registering your purchase. The iRing FX/Controller app comes with a resonant filter, but the remaining 15 effects have to be purchased, although buying the lot really isn’t very expensive.

Firing up iRing Music Maker gives you a grid into which coloured squares representing loops can be introduced. Varying the distance using the triangular side of the ring lets you activate up to eight loops, with deck or bass guitar icons choosing between the groove or the bass part. You can slide the blocks around on the grid using the touchscreen to modify the groove, while the in-line ring lets you choose variations on the bass/melody line.

Touch the mixer icon and the in-line ring lets you adjust the selected effect (of which you get four as standard with others being in-app purchases). It’s a lot of fun, with blocks drifting on and off the screen, riffs changing in complexity, filter effects and so on. Twisting the ring or moving it out of sight of the camera causes other stuff to happen — best to just try it and see what happens. In fact I found that using a single ring and switching sides by turning my hand over gave a fair degree of control. In short, lots of fun for parties or for playing DJ, but perhaps not really the right tool for creating original music.

Launching the iRing FX/Controller app displays two icons on the screen that represent the patterns on the ring and their positions as tracked. These let you see how quickly the icons follow the actual movement of the ring, and the movements on the three axes can be assigned to three effect parameters. There seems to be up to half a second of delay, which may be too much for crucial MIDI control applications, but for slow filter sweeps and suchlike it is fast enough. You do have to be careful that you don’t inadvertently buy a new effect or other add-on when exploring the menus, but otherwise iRing is lots of fun. For me it is the motion-tracking technology that is most interesting, not what the existing apps actually do, so I’m really hoping that other companies get on board and make use of what this technology has to offer.