Latvian mic makers JZ have applied their unusual design approach to this hand-held vocal mic. Does it stand up to the competition?

JZ microphones have only been around for about seven years, but they have already attained high visibility because of an often unorthodox approach to designing studio microphones — the JZ Black Hole model being one of the more visually distinctive examples. Based in the Latvian town of Riga, JZ microphones are designed by Juris Zarins, who has a long history of microphone design, and of course it is his initials that give the company its name. Manufacturing also takes place in Latvia, which makes a refreshing change from the ‘everything must be built in China to cut costs’ approach.

The HH1, which I would guess stands for ‘hand held’, is the first dynamic microphone from the JZ stable. It follows the general pattern of most live microphones, its cardioid-pattern neodymium capsule delivering a creditable frequency response specified as 50Hz to 18kHz (and where the response curve shows that there’s still a useful amount of output left by 20kHz). Rather than exhibiting the expected live vocal-mic frequency response with a very obvious presence peak, the entire mid-range is lifted by four or five dB, with only a subtle extra presence bump of a further dB or two at 5kHz. At the low end, there’s a very gentle roll-off starting at around 400Hz to compensate for the proximity effect. A polar plot and frequency response is printed on the packaging for the microphone, and the off-axis response seems to be very consistent across the frequency range — a factor that can help in increasing the feedback threshold. 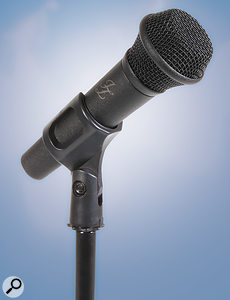 The capsule sits atop a very resilient shockmount, and is protected by a dual-layer basket comprising a coarse metal grille with a much finer metal mesh bonded to the inside. There’s no internal foam layer as found in so many vocal mics, though there should be no problem in removing the basket and washing it from time to time. As expected, the basket simply screws into place.

Outwardly the mic is distinguished by the flat-topped basket shape, but in terms of size and weight (58 x 172 mm, 280g), it is comparable with most other dynamic vocal microphones and it feels reassuringly solid. Its body looks to be cast from alloy and then machined, and the XLR connector is fitted with gold-plated pins to protect against corrosion. An output impedance of 300Ω is specified. There are no switches on the mic body, which is finished in a very fine textured matte black paint similar to that used on vintage cameras. Accessories comprise a microphone clip complete with thread adaptor and a zip-up vinyl pouch.

What better way to check how a live vocal mic performs than to take it to a gig and just use it? That’s exactly what we did, and the HH1 held up very well, delivering a natural and full-sounding vocal tonality with good intelligibility — articulate but without sounding peaky or aggressive. Its resistance to feedback was as good as, if not slightly better than, the microphones we normally use, and there was no tendency towards popping that I noticed. The low-end tailoring also seemed to balance the proximity effect perfectly when using the mic in its usual close position. Though we used the HH1 standmounted for that gig, there was no excessive handling noise when I checked it out in hand-held mode. The amount of preamp gain needed was also very similar to the settings used with our own mics, its quoted sensitivity being -74dB ±3dB.

I rather like the quirky basket styling, and the flattened top probably also improves its effectiveness as a pop shield. The neodymium capsule’s extended high end clearly helps in delivering an ‘open’ sound and should also be of benefit when using the HH1 on instruments such as snare drums, or other instruments that require definition.

Though slightly more expensive than the ‘market leader’ SM58 (though it might be fairer to compare it with the neodymium Beta version of that microphone), the JZ HH1 is still a sensibly affordable microphone and is built to last. During our test it sounded good without the need for much in the way of EQ on the mixer, other than the usual low cut, and it ticked all the right boxes for practical live performance, specifically tonality, resistance to feedback, resistance to popping and adequately low handling noise. Definitely one to consider if you’re looking for a new mid-priced live vocal mic.

There are any number of competing mics in this price range with Shure’s Beta 58 being an obvious one. Each has its own character so, as with studio mics, it’s more about finding one that works with your voice, as well as minimising feedback and popping.

JZ’s first dynamic mic looks to be a very serious proposition and it makes a valid alternative to the more obvious choices.