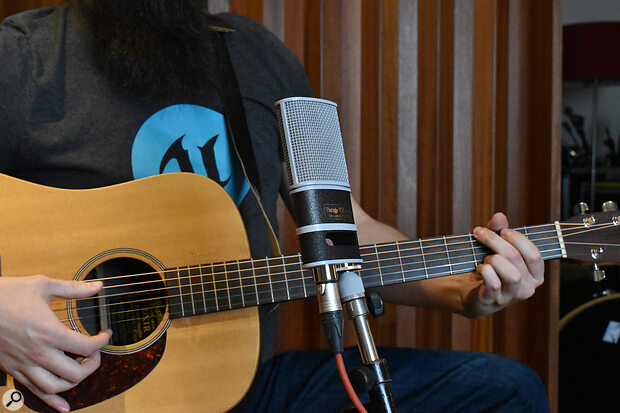 The Vintage 12 isn’t only useful on vocals! Its airy top end also makes it a good choice for sources such as fingerstyle guitar.

Can a solid‑state microphone really give you the sound of an AKG C12?

Latvia‑based JZ Microphones have been producing their quirky‑looking mics for well over a decade now but, in the UK at least, it’s only in the last few years that more of a buzz has appeared around their products. This is mostly thanks to their Vintage series mics, which a number of respected engineers claim offer sound quality beyond what you’d expect from their price tag. Their Vintage 67 is the model that I’ve heard being talked about most, but they also make a mic called the Vintage 47. As their names suggest, both are inspired by classic Neumann mics.

For review here, though, we have the Vintage 12, which takes the AKG C12 as its sonic inspiration. The V12 isn’t a new mic as such, but the success of their V67 and V47 models has led JZ to reissue it as part of the Vintage line to get it the attention they feel it deserves. Like those other models, the V12 is not a straightforward copy of its inspiration. For one thing, it’s not a valve mic; and it uses a centre‑terminated capsule rather than the edge‑terminated AKG‑style design. This capsule also uses JZ’s proprietary Golden Drop sputtering, whereby gold is deposited in small circles. Compared with traditionally made capsules, this design lowers the mass of the diaphragm, and is said to improve transient response. Solid‑state electronics have practical benefits too — they tend to have lower noise, are more rugged, and don’t require a separate power supply — but can they really produce the magic that a well‑designed valve microphone can? 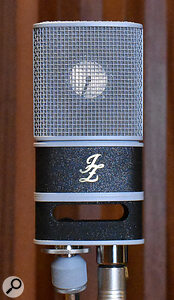 I respect companies that do their own thing from a cosmetic point of view, and I haven’t reviewed a microphone that looks so different from anything else in my microphone cabinet as the V12. As with other mics in their range, the body features a physical hole, and what struck me most about the design was just how little ‘body’ there is to the V12. It really is all about the capsule and its basket.

The mic ships with a small screw attached to the top, which holds the capsule in place in its internal shockmount during transit. Once this has been removed, the mic is designed to be used without an external shockmount, and it comes with its own ball‑and‑socket attachment that allows a small degree of rotation on top of a mic stand. I liked the look of the V12 when it was in action in my live room, and despite the minimalist design and unusual looks, it still manages to have enough physical presence that an experienced studio singer will not feel short‑changed.

Female vocals seemed like a great place to start when I first put the V12 to use, and it was obvious straight away that this was a mic with a generous high‑end boost. A quick look at the included frequency response confirmed this, with a 2dB dip at around 2kHz giving way to a broad bell‑shaped lift that begins around 3kHz and peaks around 8‑9 kHz. This makes the V12 feel quite ‘airy’ and ‘hi‑fi’, but it also manages to sound smooth, restrained and, well, a bit like a good valve mic, which is nice! Female vocals were a great fit, which wasn’t a huge surprise, but I was also impressed with how it sounded on a male voice, where it exhibited a solid low end that could be enhanced, if needed, by working the proximity effect.

You get a subtle sense of valve‑like character to your recordings but with a more focused transient response.

On acoustic guitar, I found the presence boost made the V12 a bit fussy in terms of placement, although once I’d found a position that had a nice amount of low end, it had the effect of balancing out the more ‘zingy’ top end that the mic was exaggerating. As a drum overhead, that 8‑9 kHz boost was a little too edgy on the cymbals in my room, but I was very impressed with how it captured the tone of the drum shells. On the snare, in particular, it produced an impressive representation of my Ludwig 401, with the perfect balance of body and crack — so much so that I recorded some extra snare hits with a view to adding some new drum samples to my collection.

As a last test, I tried the V12 outside a kick drum to get a feel for the mic’s SPL handling, and it worked very well indeed. Placed around two inches from the lower half of my 22‑inch kick drum’s resonant head, it produced a solid, clean low thump, seemingly without breaking a sweat.

This was my first encounter with a JZ mic, and on any source that didn’t already have any inherently unpleasant high mids, I was very impressed. It delivers a subtle sense of valve‑like character, but with a more focused transient response than you’d get from most actual valve mics. It was the sense of solidity across the low end and midrange that perhaps impressed me the most, and it also has that airy quality that engineers most associate with a good C12. On the right source — female vocals in particular — it can excel.

Although this is not a budget microphone by any means, it’s impressive that JZ have produced a capsule that does all the heavy lifting in capturing studio recordings with both clarity and character. The V12 is well worth checking out if you get a chance.

Part of JZ's Vintage series, the V12 relies on the capsule design to produce the flavour of revered tube microphones but with additional practical benefits of a solid-state design. Unless stated, all audio examples were recorded in my studio using the preamps on my Audient 8024 console with no EQ or compression.

A short example of a female vocal recorded using the V12 with a pop shield. For this recording the preamp was a Neve 73LB; the very slight distortion you may be able to hear is from the preamp.

An example of a male vocal recorded in a typical studio setting.

For this example I recorded a male voiceover with my actor positioned six inches from the microphone capsule.

It took a while to find a suitable position but this is how the V12 sounded when positioned around a foot away and pointing halfway between the sound hole and the bottom of the fretboard.

This is how the V12 fared as a mono drum overhead positioned around one metre directly over a drum kit.

The V12 positioned 3-4 cm away from the resonant head of my 22-inch Rogers kick drum.

The Vintage 12 by JZ Microphones is an original‑looking and impressive‑sounding microphone that offers many of the benefits of a high‑quality tube mic, with the conveniences of a solid‑state design.