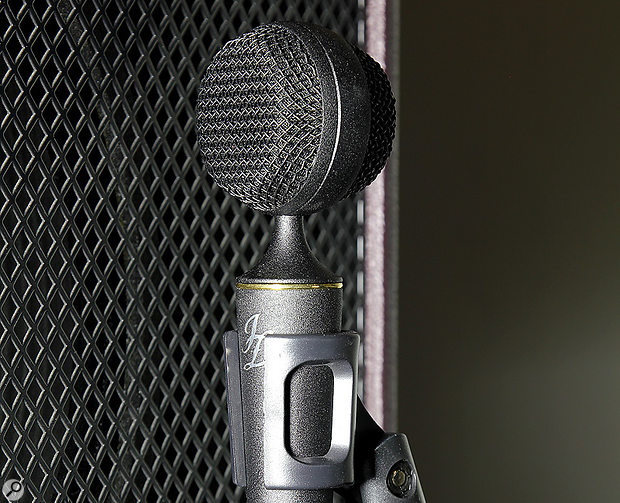 There are plenty of options when it comes to miking guitar amps, but JZ’s latest affordable offering does an excellent job with minimum fuss.

Miking an electric guitar cabinet is often more of an art than a science. Since a typical guitar-amp speaker doesn’t push out much in the way of very high-frequency harmonics, we often see dynamic mics of both the moving-coil and ribbon varieties being pressed into service, as their restrained high end isn’t a limitation — indeed, it may help smooth out some undesirable artifacts. It is no secret that Shure’s SM57 is very widely used for close-miking guitar cabs both on stage and in the studio, sometimes in conjunction with one or more other mics arranged at different distances, but there are alternatives. Latvian company JZ are well known for their studio mics but their new GTR1 guitar cab mic is aggressively priced to tempt both live-sound and studio engineers away from the more obvious choices.

Distinctive in appearance, the GTR1 is a moving-coil, dynamic, cardioid-pattern microphone. Its neodymium magnet capsule is suspended within a circular basket perched atop a stubby, tapered body. A tough, dual-layer metal grille protects the capsule, which looks to be around one inch in diameter. The standard of finish is very high, with a matte-black grille, a lightly textured black coating on the body and a gold ring at the wide end of the body. JZ’s silver logo adorns the body, but curiously the model number of the mic is absent. Overall the mic measures 60 x 155 mm, weighs a reassuring 280g and comes with a protective vinyl pouch and stand clip with thread adaptor.

By way of specification, the GTR1 has a 50Hz to 18kHz frequency range; there’s a gentle low-end roll-off starting up at around 500Hz to counter the proximity bass boost that invariably accompanies a cardioid pattern mic used at close range. There’s a wide presence peak centred at 5kHz, after which the response falls away slowly to 18kHz and beyond. Sensitivity is quoted at -74dB (±3dB), which is typical for this type of microphone, so there’s little in the paper spec that really tells us how this mic is actually going to sound. Time to stick it in front of a guitar cab!

In the studio I often use a mic distance of around 250 to 300 mm, so that’s what I tried first, keeping the mic close to the speaker axis. Playing back the recording produced a pretty good result, but it sounded somewhat bass light compared with how I heard the amp in the room, presumably because of that low-end roll-off. Repeating the test with the mic 30 to 50 mm from the grille produced a much better balance and came very close to how the amp sounded when standing in front of it. There’s a nice throaty ‘grunt’ to the lower mids without but being muddy, while the high mids have good projection with minimum scratchiness, even when dialling in lots of overdrive.

Repeating the same test with my decades-old SM57 showed it to be less sensitive and somehow not quite so refined sounding, with a slightly nasal character and more lower-mid congestion. Adjusting its position slightly off axis got me closer to the sound I was looking for, though, proving that there’s plenty of life left yet in that old dog. I also tried the same test with the cheaper Prodipe TT1 instrument mic, and found that again I had to move that some way off-axis to tame the brashness emphasised by its presence peak, but otherwise it gave me very usable results.

Of the three microphones, though, I think the JZ GTR1 came the closest to what I felt was the actual sound of the amplifier in the room — at least it sounded the most musical to my ears — and as long as you keep it close to the speaker grille, there’s plenty of low-end weight. It also seemed a little less fussy about its actual position relative to the axis of the speaker than the other mics — the tone changed, as you’d expect, but all positions gave me something workable. Given this microphone’s competitive price, I think it could do very well in its chosen area.

Other than the obvious Shure SM57 or Beta 57, there are numerous cardioid-pattern dynamic mics in a similar price range from all the established names that will work well for guitar amps.

In its intended application as a close mic for a guitar cab, the JZ GTR1 really delivers, both live and in the studio. I’ve tried lots of mics, all of which can give perfectly good results, but this one seems to get there with very little effort.