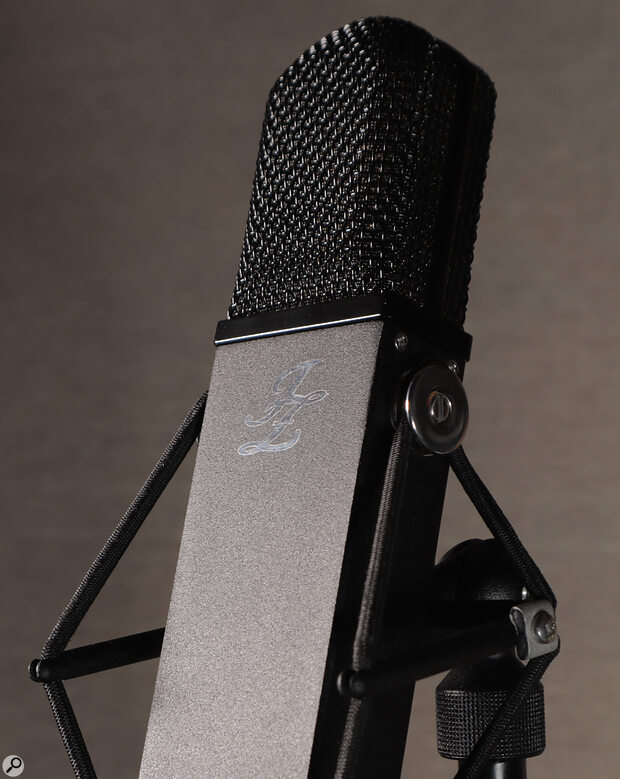 Boutique Latvian company JZ Microphones have earned a reputation for their classy mics, and their latest design doesn’t disappoint.

JZ Microphones take their name from the initials of designer Juris Zarins, who established the company in 2007. And, unlike some microphone manufacturers I can think of, JZ actually manufacture microphones. In other words, they don’t just commission something that looks nice from a Chinese factory and put their name on it; JZ mics are hand‑built in the Latvian capital of Riga, from the all‑important capsule upwards.

In an era when many ‘boutique’ companies focus on copying the same old Neumann and AKG designs, JZ’s emphasis on innovation is also refreshing. This is most apparent in their industrial design, which eschews the usual cylindrical and conical bodies in favour of more radical shapes, including the unforgettable Black Hole mics. However, Juris is also an innovator at a more fundamental level, thanks to his invention of the Golden Drop capsule...

In most capacitor microphones, a tensioned membrane made from Mylar or similar is sputtered with a very thin gold film. Usually, the membrane is circular, and the metal covers its entire surface area apart from a narrow ring around the outside. The Golden Drop capsule likewise uses a circular diaphragm, but the gold coating is applied in a series of smaller circles with spaces inbetween. This, say JZ, makes the diaphragm lighter and more responsive, delivering more “clarity and precision”.

The latest microphone to use this technology, and the first in JZ’s Signature Series, is the BB29, a cardioid‑only, large‑diaphragm capacitor mic with a transformer‑coupled output. Unusually, though, the Golden Drop capsule employed here is a single‑diaphragm version.

Nearly all large‑diaphragm capacitor mics use what’s called a dual‑diaphragm or Braunmühl‑Weber capsule, in which there are membranes at both front and back. This allows it to offer switchable polar patterns, and even when the rear diaphragm is not polarised, its acoustic properties are significant in determining the mic’s response. This isn’t the only way to do it, though; the classic Sony C37 used a capsule that is closed to the rear, as have more modern designs like the Samar TF10 and Josephson C705. One consequence of this design approach is that single‑diaphragm mics tend to have less proximity effect than their dual‑diaphragm brethren, allowing them to be worked closer.

Visually speaking, the BB29 is perhaps not quite as striking as the Black Hole, but it’s still instantly identifiable. The electronics are housed in a smart rectangular box, from which the headbasket protrudes both upwards and slightly outwards. Four metal discs on the narrow sides of the case are mounting points for the BB29’s bespoke shockmount. This is a cost option, but if you don’t need it, the bottom of the mic contains a standard threaded mounting socket alongside the female XLR. The mic doesn’t come with any sort of storage box, which is a shame, but perhaps JZ are confident that you’ll never want to take it off its stand! The mic itself is nicely made and classy in appearance, and the shockmount is effective but requires care when being adjusted, as the mic can easily become dislodged from its cords.

If the reduced area of gold on the diaphragm compromises the BB29’s performance in any way compared with a standard capacitor mic, that’s not apparent from the specifications. It offers a comfortable sensitivity of 20mV/Pa, can cope with signals of 140dB SPL before distortion reaches 0.5 percent, and boasts a very decent if not quite class‑leading self‑noise figure of 9dBA. Output impedance is listed as 150Ω, and the mic requires +48V phantom power to do its stuff.

Vocal mics are a very personal choice, but... you might find the BB29 offers exactly the right kind of flattery!

JZ’s publicity material states that the BB29 is designed “with one goal in mind — to stand out”, and it’s clearly not intended as a neutral mic. The published frequency response shows a generous lift throughout the upper midrange and high frequencies, rising to broad peaks at 7kHz and 13kHz and rolling off just below 20kHz. From 1kHz down it shows a small rise at 500Hz, and is thereafter flat to 40Hz.

This sort of baked‑in brightness can be a double‑edged sword. On the one hand, it’s a seductive sound, and very often anticipates what you’d do with EQ at the mix anyway. On the other, it risks exaggerating unwanted high‑frequency artefacts such as sibilance, mouth noises, fret squeaks, pick clicks and so on; and if a source has any predisposition to harshness, a bright mic can make it worse.

I think JZ have walked this particular tightrope quite nicely with the BB29. It is, indisputably, a bright microphone, but on most sources, that manifested itself as excitement and liveliness rather than unwanted edginess. Covid made it hard to find a wide variety of singers to act as guinea pigs, but I was able to A/B it on a female vocal against a Neumann U87. The character of the two mics was quite different, with the BB29 being much ‘leaner’ in the midrange than the U87; nevertheless, it still sounded balanced, and I was impressed at its ability to accentuate the treble without sounding shrill or sibilant.

On instrumental sources, the BB29 performed much as you’d expect. Where a bit of extra brightness is desirable, as on fingerstyle guitar, for example, it’s a fine choice. If the source is already on the brash side, things can get a bit fierce, and it wouldn’t be my first choice for strummed acoustic or drum overheads. Where the BB29 really shone, however, was on my own voice. I’ve tried capturing this unlovely instrument through many, many different transducers over the years, and I would go so far as to say that no other mic has ever done it better. Vocal mics are a very personal choice, but if you too are in possession of an unruly and untrained baritone, you might find the BB29 offers exactly the right kind of flattery!

With its tucked‑in midrange and broad treble emphasis, the BB29 epitomises what I’d describe as a ‘modern’ sound (it is, apparently, designed to respond well to heavy compression) and in practice, I think it’ll find use mainly as a vocal mic. There’s plenty of competition in this category, and if you’re after a similar up‑front, present vocal sound, you could also consider choices like the Sony C100 and Neumann TLM103. Audio‑Technica’s AT5040 is stunning, but a lot more expensive (especially considering JZ’s time‑limited introductory offer), while Austrian Audio’s OC‑series mics provide a slightly fuller and more rounded alternative. None of these, however, offer the additional richness of the BB29’s transformer, nor the reduced proximity effect of its single‑diaphragm capsule. From this perspective, Samar Audio’s TF10 presents the closest parallel, but that doesn’t have the same obvious brightness.

All of which is another way of saying that the BB29 carves out a little niche of its own. It’s not a “me too” product, and I can’t think of another mic that sounds or behaves exactly like it. Standing out is something that all JZ mics do pretty easily, thanks to their appearance; this one stands out for its sound, too.

The BB29 is a cost‑effective, European‑made capacitor mic that makes it easy to capture a detailed, ‘modern’ vocal sound.