It's easy to see where the Black Hole gets its name, but this novel microphone isn't all about appearances... 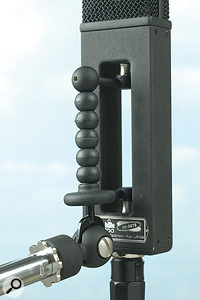 The Black Hole's unique shockmount is eye–catching. In use it works as well as conventional designs and it's arguably less cumbersome.If the name JZ Microphones seems unfamiliar to you, that's probably because this Latvian company was established as recently as September 2007, but they still know something about building high–end mics: their chief designer Juris Zarins worked with Violet Designs prior to setting up his own JZ brand.

The Black Hole — the first mic produced by JZ — comes in a very solid wooden box, finished in a brown varnish and with foam linings. If you're wondering about the name, one quick look should set your mind at rest. A long, slotted aperture sits in the centre of the long, flat mic body, not as a design statement (OK, not only as a design statement) but to hold the shockmount, which is as unusual–looking as the mic that it supports. Overall, the mic measures 203mm x 51mm x 28mm, which in some ways makes it appear rather like a stretch–limo version of an AKG C414, but other than both mics being multi–pattern, that is where the similarities end.

In almost all respects, the Black Hole is nicely engineered. It's finished in a fine black–crackle paint that gives it a vintage vibe. The steel basket is also black, but two silver studs sit inside the opening to secure the shockmount. The shockmount itself looks like a string of rubber beads, and is simply squeezed to get its two mounting–points to fit in between the studs. You need to ensure that the rubber cups in the mounting points fit over the studs correctly, though, because the mic could fall off the mount in the middle of a session if you don't!

Although the pattern switch itself is tucked away on the inside face of the 'hole', there are clear graphics on a silver background to show which pattern is selected. The slide switch feels a bit cheap, though: I'm sure it will work fine without wearing out, but it feels slightly unrefined compared with the rest of the mic. There's a choice of cardioid, figure–of–eight, and omni modes, produced by combining the outputs from two separate 27mm–diameter back–to–back cardioid capsules. This is a different approach from that of those mics that have both capsules based around a common backplate. Peeking through the grille, the diaphragms appear to be centre–terminated. According to the technical info, the metallic layer is a special alloy, rather than pure gold, and an unusual sputtering technique is used to control the way the coating is deposited across the diaphragm. This seems to be arranged as a series of discrete discs in concentric circles rather than a continuous coating, but no extra information was given on this process or its purported advantages. A standard XLR output connector with gold–plated pins is fixed into the base of the microphone, and a gold JZ logo denotes the 'hot' side of the mic in cardioid mode.

Amplifying the output from the capsule is a discrete Class–A preamp, presumably using a FET, that has a claimed A–weighted self–noise of just 7.5dB. If accurate, this is gratifyingly low. As the capsule is a true capacitor design, the mic requires 48V phantom power to operate. The dynamic range is specified as 128dB and the sensitivity as a healthy 21mV/Pa.

A frequency response of 20Hz20kHz is quoted, but without specifying limits this means very little. A small graph included with the publicity material shows a very gentle, wide hump centred around 150Hz and only a dB or so in amplitude. There's an equally subtle presence peak at 10kHz that's almost totally cancelled out in the figure–of–eight position by the mic's natural high–frequency roll–off in that mode. The response, then, is rather flatter than you'd normally expect from a large–diaphragm studio mic, with a very subtle 'smile' characteristic, which should make it a good all–rounder.

Sum Of The Hole 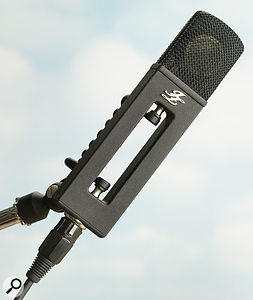 Given the price of this mic, it clearly has to do more for a living than impersonate a letter box, and I was pleased to find that it does! Tests with spoken word revealed a clear, well–focused sound that balances low–end warmth with high–end clarity, and because there's isn't much in the way of coloration, the Black Hole should work well as a general–purpose studio vocal mic where you have to deal with lots of different singers; although a mic with more pronounced characteristics may produce more artistically pleasing results for a specific singer (if time is taken in auditioning to get the right mic), the same characteristics might make it just as unsuitable for another. The tonal character of the Black Hole in cardioid mode is very similar to its tonality in figure–of–eight and omni modes — that is, once you've allowed for the extra room ambience that these patterns tend to capture.

I took the opportunity to test the shockmount while I was set up for vocal recording and found it to be adequate, but I couldn't detect any real advantage over the more conventional type, other than in space–saving. I also checked for susceptibility to popping, and although any mic used for close–miked vocals is probably best used with a pop shield, the Black Hole seemed reasonably resistant to popping with a moderate singing style.

I was particularly impressed with the Black Hole on acoustic guitar. The sound came across as tonally well–balanced and without that annoying phasey quality that many mics seem to end up capturing (even many of the good ones). I suspect that the slight smile–curve helps here. Whatever the technical reason, the mic turned in the kind of performance in this respect that I'd normally associate with a good small–diaphragm mic. Although I didn't have the opportunity to try it on acoustic piano, the way it handled acoustic guitar made me wish I had, as I suspect it will perform well in this role. It also put in a strong showing on percussion, including some folk instruments. For example, I often use a broomstick with bottle–tops nailed on to it, and this was captured very much the way I heard it in the live room, with lots of clarity but at the same time without the high–end jangle seeming excessively hyped. Noise was never evident during these routine tests — bearing out the suggestion in the published spec that this mic is rather quieter than the average multi–pattern, large–diaphragm model.

I don't personally find this microphone particularly attractive from a visual standpoint, but I have to admit that its looks are distinctive. I was half expecting an 'Emperor's New Clothes' experience, with the novel cosmetics hiding a capable but unremarkable performance, but the Black Hole surprised me. As a vocal mic, it won't be the best choice for everyone — especially those who need tonal support — but when it comes to balancing warmth with definition, and with minimal phasey smearing, the mic turns in a very good performance indeed, on both voice and acoustic instruments. It also exhibits a sensibly consistent tonal balance across the three different polar patterns.

The more you use it, the more the Black Hole draws you in! It doesn't have the market all to itself because £1000$2000 buys you a lot of microphone, including some studio favourites such as the various AKG C414 models, but from what I've learned of its capabilities, it deserves to be taken very seriously in that company.

There is some serious competition in this price range, including the various different models of AKG C414. If you're on a slightly tighter budget you could look at something like the SE Electronics SE4400a.

The Black Hole may look quirky but it also gives a very honest representation of what you put in front of it. I was particularly impressed by its sense of focus.