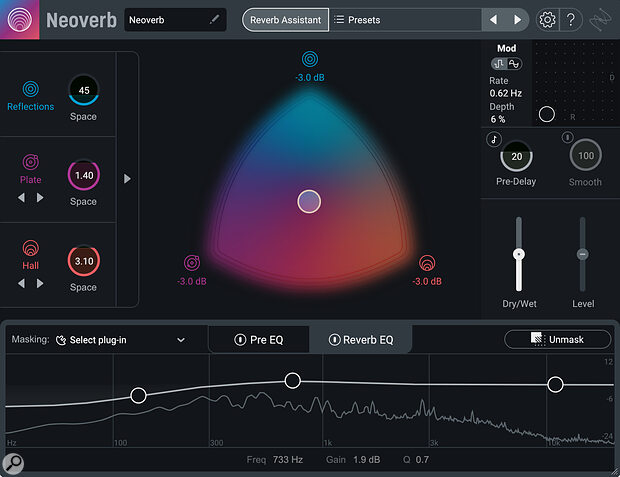 Your virtual assistant is here to help you find the perfect reverb...

iZotope are well known for creating plug‑ins that intelligently assist the user in finding the optimum settings. In Neoverb that concept has been applied to a new algorithmic reverb, with three reverb engines, two of which provide different types of reverb tail and one offering early reflections ambience. Authorisation can either be to a specific computer or an iLok dongle, and all the common plug‑in platforms (including AAX) are supported across Windows and Mac OS.

It’s possible to manually blend the three engines in any proportion by dragging a puck around the Blend Pad, a three‑sided workspace. Alternatively, you can use the built‑in Reverb Assistant: first you select the main attributes of the reverb you’re looking for, and the assistant then fine‑tunes the parameters based on its analysis of the input signal. iZotope have also include their Auto Cut and Unmasking features, which are able to adjust both the pre‑ and post‑reverb EQ for you, to resolve problems borne of masking (either between the wet and dry sound, or between the wet sound and the audio passing through a compatible iZotope plug‑in that you’ve instantiated elsewhere in your project).

For those occasions when Reverb Assistant doesn’t offer you enough control, each engine has a handful of advanced parameters that can be adjusted manually. Other features include modulation, variable pre‑delay (which can be tempo‑sync’ed) and smoothing, which brings a transient shaper into play to control the signal being fed into the reverb engines. Mod is controlled using an X‑Y Rate/Depth interface to add movement and texture within the reverb tail, and can run from either a sine wave or a random generator. A cog‑wheel button accesses settings for auto update, sending of usage data and deauthorisation.

The blue engine at the top of the Blend Pad generates early reflections. It can be adjusted using a single Space control, which links to both the Time and Size parameters that are exposed in the Advanced view, of which more in a moment. Increasing Space essentially moves the early reflections further apart. Pressing the Reflections button toggles the engine on or off. The second engine (purple) generates reverb tails corresponding to Room, Medium Chamber, or Plate. Finally, the third engine (orange) is set out in the same way but generates Large Chamber or Hall tails. 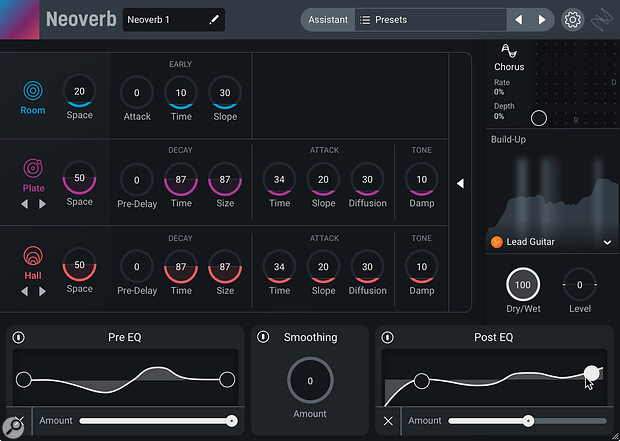 Two views of the Advanced GUI, which offers deeper control over the reverb and EQ parameters.

With only four rotary controls added per engine, there’s nothing particularly intimidating in the Advanced settings, which are accessed by clicking the arrow in the narrow panel to the right of the three engines. All three engines have controls for Time, Size and Diffusion, and the two reverb tail engines also have Attack parameters designed to soften the onset of the reverb tail. Higher diffusion values work well for percussive sounds, as they make the reverb sound more dense and less grainy. The Reflections section has an Angle control that adjusts the tonal character and intensity of the reflections. At the end of each row are slider controls for adjusting the reverb tail crossover frequency and damping values, while the early reflections section has a variable‑frequency low‑pass filter. Adjusting the damping emulates the way that high frequencies tend to decay more rapidly than low frequencies when reverb occurs naturally. 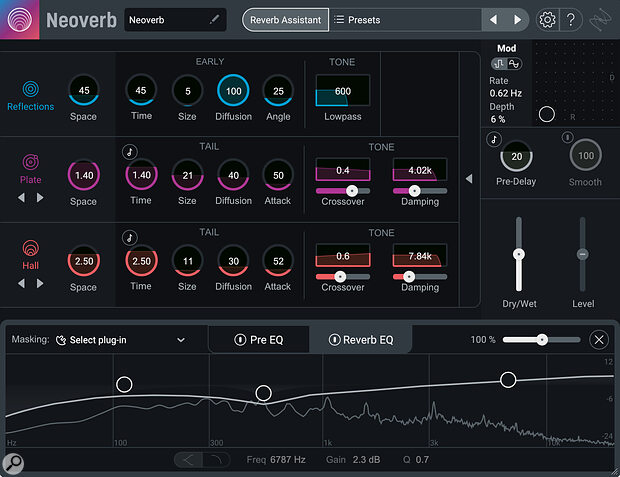 Let’s assume that you’ve tried some of the presets, which are arranged in handy categories, but now want to try the Reverb Assistant. You open this by clicking the Reverb Assistant tab at the top. The Reverb Assistant window has a horizontal slider for Style, which appears to produce mainly early reflection ambience at the leftmost extreme and a tail‑heavy sound at the rightmost, which favours engine three. Below this are a slider to select the reverb size, a Dry/Wet mix control, and a choice of four tonalities: Clean, Dark, Bright and Airy.

Once you’ve made your choice, clicking Next prompts you to play the audio track. Then, after a few seconds of playback, you’ll recceive confirmation that both the pre‑ and post‑EQ have been set for you to minimise masking. If you like what you hear, click Accept and you’ll be returned to the main screen, where you can see the resulting EQ curves overlaid on a frequency analyser curve. EQ tabs switch between Pre EQ and (post) Reverb EQ views, and a horizontal percentage slider allows the user to increase or decrease the depth of these EQ curves. If the reverb balance isn’t quite as you’d like, you can drag the puck around the Blend Pad to change the blend of the three engines. In either EQ view you can click on a button to have the masking EQ recalculated while playing back audio. In Pre EQ view this shows up as Auto Cut, whereas in Reverb EQ mode it shows up as Unmask. During this process, foggy patches come and go to show where masking is taking place as your audio plays, before the EQ is adjusted automatically.

In the Reverb EQ view, a Masking selector chooses between Wet/Dry, or a plug‑in on another track to work out the EQ setting that will prevent the reverb from masking the selected source. The system can accept audio from other Neoverb instances or from iZotope’s Neutron 3, Nectar 3, VocalSynth 2 or Relay. EQ settings can also be modified manually by dragging the three points on the EQ curve using handles to adjust the Q of each filter. The high and low sections can be set to cut or shelving; the slope options are 6, 12, 24 and 48 dB/octave.

Neoverb covers the whole algorithmic range from tight room ambience and small spaces, via dense vocal or percussion plates to huge halls, and it does so very convincingly...

Judged purely on its reverb quality, Neoverb holds up well against other algorithmic reverbs. Even though the number of user controls is quite small, even in the Advanced section, it covers a lot of ground too — as the presets demonstrate very well. Dial down the diffusion and some of that old‑school coarseness creeps in, and that can be very flattering on vocals or non‑percussive sources; turn up the diffusion for a smoother reverb that works well on percussive sounds. But Neoverb also has enough range to create trashy, metallic reverbs, slap‑back reverb or booming, bass‑heavy spaces when called for. All of that makes it a flexible reverb.

The results from the Reverb Assistant are, as you might expect, nicely tuned versions of what you might think of as conventional reverb, and in most cases that’s exactly what you’ll be looking for. But the results can be adjusted either in standard or Advanced modes, and in many cases I found myself rolling off the low end of the EQ both pre‑ and post‑reverb, even when the Assistant didn’t deem that necessary. That’s not to say the Assistant got it ‘wrong’, though: the results are generally pretty good and get you in the right ballpark very quickly, but the graphic interface makes it very easy to adapt things to taste, should you feel the need.

Despite its apparent simplicity, Neoverb covers the whole algorithmic range from tight room ambience and small spaces, via dense vocal or percussion plates, to huge halls, and it does so very convincingly. The reverb integrates well with the dry sound, becoming part of the overall sound rather than seeming like something just stuck on top, and even when the reverb percentage is set very high there’s still plenty of definition.

Two things really set Neoverb apart from the reverb plug‑in crowd. One is the very intuitive way in which the three reverb elements can be blended to produce a reverb that sounds the way you want it to. The other is that very smart adaptive EQ which prevents the reverb from getting in the way, even when mixed at a very high level, without it sounding as obvious as ducked reverb.Whether you actually need all the facilities of Neoverb depends largely on your experience with setting up suitable reverbs. But I think even seasoned engineers will be surprised at just how quick and effective the Assistant section is in coming up with reverbs that sound right for the job without getting in the way. The more I use Neoverb the more I like it. But don’t just take my word for it: there’a a free trial period so you can judge it for yourself.

A novel approach to setting up reverb that saves time and produces convincing results.