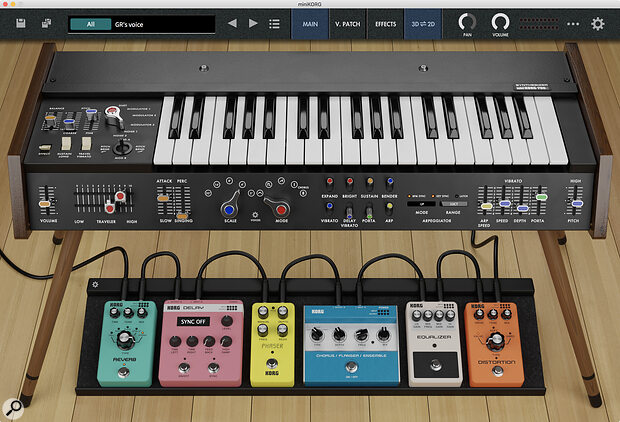 Since the release of the Polysix, MS20 and Wavestation soft synths in the first incarnation of the Korg Legacy Collection, the incorporation of the Polysix, MS20 and CX3 in the OASYS, and subsequent ‘soft’ recreations of the Mono/Poly, the M1 and the Triton, Korg have been steadily mining their rich history of analogue synthesizers and digital sound engines. Now the company have turned their attention to three more of their keyboards — the MiniKorg 700S analogue monosynth, the Prophecy digital monosynth and the Triton Extreme workstation — releasing soft synths based upon each of these within the Korg Collection 3.

Some people might find these strangely chosen. After all, the Korg 770 and 800DV are more revered than the 700S, the Z1 would have covered more ground than the Prophecy, and the Trinity probably has more of a cult following than the Triton Extreme. But others will find them well chosen. Wherever you stand on this debate, there’s no doubting that the response to their announcement was almost overwhelmingly positive so I downloaded and installed all three new synths. It was time to indulge in a bit of gratuitous comparisonising.

The 700S soft synth comprises three layers: a recreation of the 700S itself with additional performance controls and an arpeggiator replacing the original Repeat function; an eight‑slot modulation matrix offering 80 destinations fed from 32 sources that can draw upon three new LFOs and three additional ADSR contour generators; and an effects board with six virtual stompboxes.

To begin testing it, I selected the soft synth’s monophonic Init patch, deleted all of the V.Patch sources and destinations, and then switched off all of the effects units. This, in theory, turned it into an unenhanced 700S playing a sawtooth wave. I then set up my MkII 700S in the same way. The sounds that I obtained from the hardware and soft synth were very similar and I could have used either with the same musical results. So far, so good. I then stepped through the other waveforms and differences emerged. The square and sawtooth waves were fine, but the chorus waves were different, with the modulations in both I and II being deeper and faster on the soft synth. These differences were so significant that I wanted to look into them further, so I liberated my MkI 700S from storage (yeah, I know... shoot me) and set up the three instruments alongside one another. The two hardware synths were almost identical with one another but the soft synth stood apart.

I then moved on to the Travelers (the 700S’s HP and LP filters). On the original, the controls for these ensure that the cutoff frequency of the LPF always remains equal to or higher than that of the HPF so that a conventional band‑pass response is obtained. On the soft synth, they can cross over. I know that some owners chopped bits off the Traveler knobs to make this possible on the original, so I can understand why Korg have done this. Comparing the three synths demonstrated that the underlying characters of the soft synth’s filters are similar to those of the originals, although its low‑pass filter closes further and the preset amount of filter resonance is greater. However, you can correct these differences in the V.Patch page if you wish. 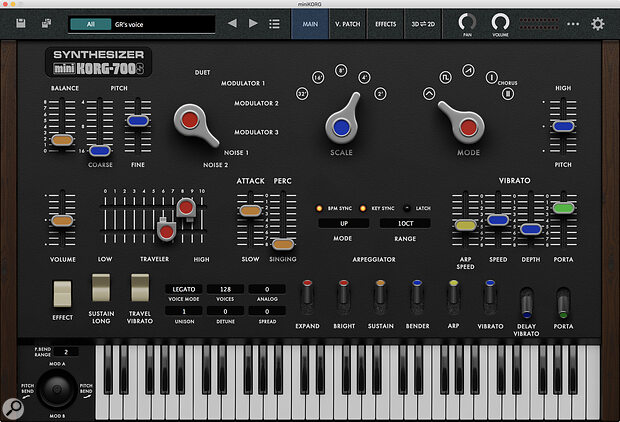 The same patch as shown in the first screen, but now represented in the more accessible 2D format.

The early Korgs have possibly the strangest envelope controls ever seen, yet they are capable of creating AS, ADS and AR contours. Experimenting with these revealed differences in the soft synth’s contour shapes and times, and I found that its ADS shape is only accessible within a narrow band at the top of the Perc/Singing range, which makes it harder to set up than the original. Furthermore, both of my original synths can generate a pleasing transient ‘bump’ at the start of the note, whereas the soft synth does not. Again, you can overcome this using V.Patch parameters.

Next, I moved on to the Effects (second oscillator) panel. This offers conventional dual‑oscillator sounds, three flavours of ring modulation and two types of noise, and in many respects it’s where the real power of the 700S lies. Here, I found further differences. For example, the depth of Modulator 3 is quite different. In addition, the pitched noise contains a tonal element that sounds like oscillator bleed, and this makes it impossible to obtain some of the exquisite breathy sounds of which the 700S is capable.

By this point is was clear that, if my hardware synths are responding and sounding as originally intended, the emulation is not a perfect replica of the 700S. Given the accuracy with which Korg have recreated the MS20, Polysix and Mono/Poly, I find this surprising. So let’s forget about emulating the original and ask what the soft synth is like as an instrument in its own right. In truth, it’s huge fun, and it generates high‑quality sounds with little or no aliasing. If you keep things simple, it has a lovely, clear ’70s vibe but, if you start to invoke polyphony, unison, lots of modulation matrix routings (including those that overcome limitations such as the on/off status of the filter modulation and resonance...