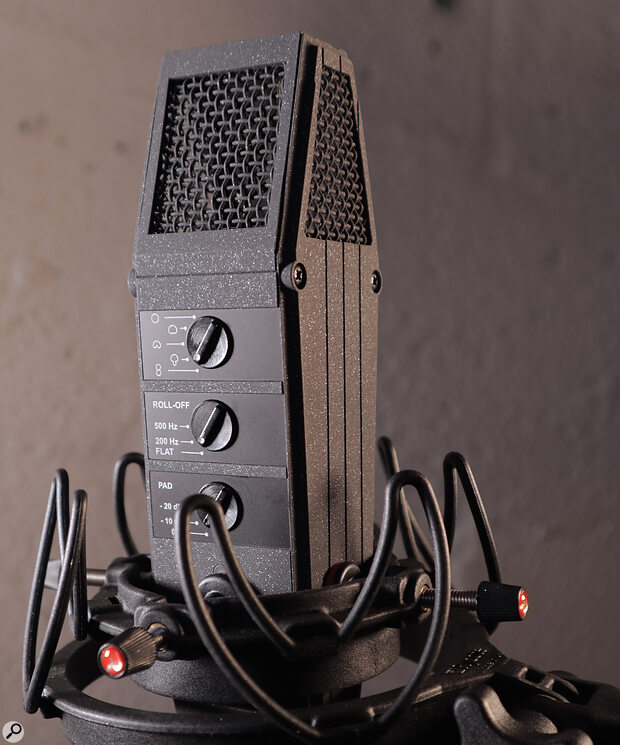 A Rycote InVision shockmount is included in the Milab VIP-60 package.

Swedish mic manufacturers Pearl and Milab have been doing things differently for 80 years — with outstanding results.

If there’s one piece of kit that I have a slightly irrational passion for, it’s microphones, and I hope I never find myself in a situation where there’s only time to rescue one of mine from a fire. If that does happen, though, it won’t be a U87 or a C414 I drag from the smoking ruins. Instead, it will be my ST8, a little‑known stereo mic made by Pearl Microphone Labs.

PML were founded in Sweden in 1941 by Rune Rosander. A keen experimenter, he pioneered a number of innovations, including the use of rectangular diaphragms in capacitor microphones. Introduced as long ago as 1958, Rosander’s rectangular capsule has a number of interesting and useful properties. The circular membrane used in conventional capsules has a single, strong resonance, which needs to be tightly controlled by damping. By contrast, the rectangular diaphragm has two, smaller resonant modes. And whereas a circular capsule has the same directivity in the vertical and horizontal planes, rectangular capsules are markedly less sensitive to off‑axis sound in the plane of their long axis than the short axis. The rectangular capsule would go on to be an enduring hallmark of PML designs through the years, including the ST8.

In 1980, a second company called Milab was established under the leadership of Rosander’s son, the idea being that Rosander and PML would focus on R&D while Milab built a wider market for the products. In the event, however, the two companies ended up as competitors, even though some models were marketed under both brands.

A key figure in this story is Bernt Malmqvist, who originally joined PML as an 18‑year‑old machinist in 1954. When Milab was created, he became that company’s production manager, before leaving to buy back the Pearl company on Rosander’s retirement in 1987. As chief designer at PML, Malmqvist continued to build on Rosander’s research, introducing many further innovations until, after 63 years in the business, he formally retired in 2017, and the two brands were at last reunited. The current Milab catalogue thus features both Milab and Pearl mics, and support is available for older models from both companies.

Although neither Pearl nor Milab has ever quite achieved ‘household name’ status in the way that Neumann and AKG have, their products have a deservedly high reputation, with advocates including Ray Charles, Quincy Jones and Bruce Swedien. The mic that did most to achieve this in the USA was the Milab VIP‑50. Launched in 1987 and still in production today, the VIP‑50 is a multi‑pattern capacitor mic that houses Milab’s 2700 rectangular capsule in an equally unconventional rectangular body. It’s not sleek or elegant in the way that other high‑end mics are, and in fact many would consider it downright ugly, but it has the merit of being instantly recognisable! To celebrate PML’s 80th anniversary in 2021, Milab launched both an Anniversary Edition of their equally classic DC‑196, and an updated version of the VIP‑50. The VIP‑60, as this mic is known, uses the same case as its predecessor, but there are numerous internal changes and improvements.

The VIP‑60 is a phantom‑powered, large‑diaphragm, true capacitor mic, drawing a fairly modest 4mA. Rather than the original 2700 capsule, the new mic uses the 2900 capsule also found the DC‑196. This retains the dimensions found in historic Milab and PML models, rather than the more elongated shape of the newer ELM capsules. Like its predecessor, the VIP‑60 is a transformerless mic, and perhaps the most significant improvement Milab have made is to reduce self‑noise. The specifications quote 14dB (A‑weighted), and the individual test result supplied with the review mic reported 13.0dBA in cardioid, where only one side of the capsule is active and thus self‑noise tends to be lowest. This is not state‑of‑the‑art, but it’s 4 or 5 dB better than the VIP‑50, and comparable to the current Neumann U87Ai.

A number of factors contribute to a microphone’s self‑noise. One of the most important is the surface area of the capsule. In this respect the rectangular diaphragm has the advantage — for a given width, a rectangle has a greater area than a circle — but other differences can counteract this. For example, whereas the familiar Neumann K67‑style circular capsule has an intrinsic high‑frequency emphasis because of its single primary resonance, Milab’s rectangular capsules are less sensitive in the high frequencies. To achieve an overall flat response, the mic’s electronics incorporate a gentle ’tilt’ across the audio spectrum, which incurs a small noise penalty. Either way, though, unless you’re recording earthworms fluttering their eyelids, the VIP‑60 will be plenty quiet enough! Sensitivity is given as 14mV/Pa, which is about what you’d want in a general‑purpose studio mic.

With its unique shape and rough grey finish, the VIP‑60’s appearance will continue to divide opinions. Personally, I rather like it, and it’s certainly the antithesis of the ‘blingy’ cosmetics found on some mics. It also feels extremely solid and well made. The VIP‑60 is shipped in a very stout and practical, watertight plastic flightcase, and comes with a Rycote InVision shockmount. This is a good choice from the point of view of performance, but it only fits in the case if the bolts that hold the mic are screwed all the way in. I suspect most users won’t have the patience to do this every time they want to pack the mic away. As a ‘quick and dirty’ alternative, there’s also a 3/8‑inch socket in the base of the mic itself.

One of Milab’s many distinctive design touches is the use of miniature rotary switches to change the polar pattern and select filter and pad settings; unusually, these are on the front of the mic rather than the back. Five polar patterns are available, with subcardioid and hypercardioid adding to the usual omni, cardioid and figure‑8. Also novel is the choice of filter settings. Rather than offering a steep roll‑off at a low frequency to eliminate subsonic noise, these are designed to counteract proximity effect when used up close, providing a gentle slope that turns over at 200 or 500 Hz. The pad offers ‑10 and ‑20 dB settings, and with the ‑20dB setting engaged, the mic can accept SPLs of up to 138dB before 1 percent distortion is reached.

The Pearl/Milab rectangular capsule is often described as having a ‘ribbon‑like’ sound, perhaps due to the absence of that prominent single resonance that characterises circular capsules. If ‘ribbon‑like warmth’ is another way of saying that these mics have a relatively restrained high‑frequency response, there’s probably something in it. Generalised frequency response charts for the VIP‑60 weren’t available when we went to press, and the individual plot for the review mic only showed the response in cardioid. This was almost dead flat from 40Hz to 13kHz or so, with very gentle dips around 6kHz and 11kHz. The response does fall away at the extreme top end, but less dramatically than the VIP‑50 does. If that mic is anything to go by, the VIP‑60’s pickup should prove more uneven through the midrange in figure‑8 than in cardioid, and more attenuated at the top end in omni, and that chimes with what I heard in those patterns.

A look at the Milab catalogue will tell you that the VIP‑60 doesn’t just compete with high‑end mics from other manufacturers. Milab themselves still offer the DC‑196, which uses the same capsule in a much more compact housing, and achieves better noise and headroom figures, though it lacks the intermediate polar patterns and the filters. As I wasn’t able directly to compare the two mics, I asked Milab about the differences between them. They explained that the two mics have completely different electronics, and that the radically different headbasket designs also make quite a big difference to the sound. The DC‑196 is the more ‘modern’ mic in design terms, but the VIP‑50 and now the VIP‑60 remain in Milab’s catalogue because there is still a demand, just as Neumann continue to offer the U87 even though they make other mics with better technical specs.

Compared with a U87, the VIP‑60 sounds almost plain, without the Neumann mic’s forward quality in the midrange, but both mics have two things in common that I think of as being the hallmarks of really good large‑diaphragm mics. One is that although sources aren’t hyped, they are nevertheless presented with a substance and solidness that makes them easy to work with at the mix. It’s easy to add top end with EQ if you do want things to be brighter, but somehow that often doesn’t feel necessary, because they make themselves clearly audible without it. The other is that you can be confident in their ability to tackle pretty much anything that comes through the studio door. In the real world, there’s never time to try out every mic in the locker in pursuit of the perfect match, so the ones that get used the most are the ones that work on the widest range of sources. By that measure, the VIP‑60 is up there with the best.

Milab told me that the VIP‑50 is particularly popular as a vocal mic, and so they didn’t want to change anything in the VIP‑60 that would undermine its strengths in this department. Having used it on quite a few voices in the review period, I’d say they got it right: this is never less than a good vocal mic, and frequently an excellent one. And on vocals in particular, those filter settings really come into their own, helping to deliver a natural and balanced sound when singers want to work the mic up close. As is the case with many classic multi‑pattern mics, the tone of the VIP‑60 does change somewhat depending on the pattern settings. On my own voice, I preferred cardioid, and found omni the least useful, but I can imagine it working well for other singers.

It represents a worthwhile and sensitive upgrade to an existing classic, and will deliver a lifetime of high‑quality recordings.

Off‑axis rejection in figure‑8 mode is very good, making this a useful mic for recording singing guitarists and the like. My informal tests showed that off‑axis capture certainly varies from the horizontal to the vertical, but it’s perhaps an oversimplification to say that rejection is better or worse in either plane. There are quite pronounced differences in the tonality of the spill in each case, so if you’re after maximum isolation, it may well be worth trying both options in order to see what works best subjectively with the source. Finally, although the VIP‑60 doesn’t have the endless headroom of some modern mics, it does have that ‑20dB pad, and I really liked it as a guitar amp mic, where it delivers a solid, up‑front sound without exaggerating any harshness or mud.

If I had to pick one word to sum up the character of the VIP‑60, it would be ‘dry’. By that, I don’t mean that it magically ignores reverb. Rather, it doesn’t obviously sugar the source, yet at the same time, is not a forensic tool like a measurement mic. Its dryness is that of a dry Martini or a good white wine: not as immediate or as obvious as the sweetness of chocolate, but ultimately more satisfying.

The VIP‑60 is priced at a level which makes it a competitor to the Neumann U87Ai, Microtech Gefell UMT‑70S and Sanken CU‑44X, among others. All of these are tried and tested designs, and you can’t really go wrong with any of them. The VIP‑60 easily deserves its place in the same category. It represents a worthwhile and sensitive upgrade to an existing classic, and will deliver a lifetime of high‑quality recordings.

Now, any chance of reissuing the ST8...?

A well‑judged update to a cult classic, delivering improved technical performance without compromising the sound that Milab devotees know and love.