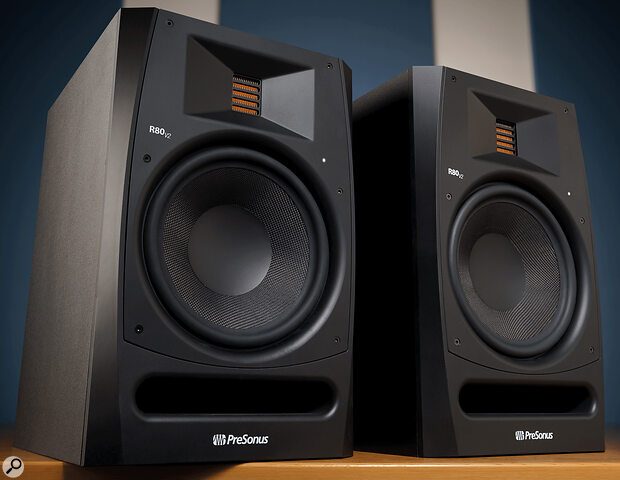 PreSonus have updated their ribbon‑tweetered R series with a set of tonal adjustment options.

PreSonus build a wide range of studio monitors, including the affordable Eris range, but the company’s two‑way R‑series speakers are a little different from most of the competition as the high end is handled by an Air Motion Transformer or AMT, sometimes referred to as a folded ribbon. This type of tweeter, designed by German engineer Oskar Heil and popularised in the private studio market by ADAM Audio, has been adopted by a number of manufacturers now, as a well‑designed AMT is capable of reproducing a clean and detailed high end, partly because it doesn’t suffer from resonances to the extent that a conventional tweeter does.

The folding of the ribbon also gives it a much greater surface area than the ‘space’ it takes up on the front baffle: if unfolded, the 0.01mm‑thick Kapton AMT membrane used in the R80 V2 reviewed here would measure 6.8 square inches — roughly equivalent in area to a conventional tweeter three inches in diameter. The shape of the tweeter housing, meanwhile, controls its directivity so as to produce a wide but shallow pattern. This allows a wide sweet spot while reducing the effect of desk and wall reflections, which should translate into better sound quality, at least in the higher registers, when the room acoustics are less than perfect.

SOS reviewed the original R80 model back in June 2017 (https://sosm.ag/presonus-r-series), but this new V2 update adds a number of extra features, including EQ controls on the rear panel, specifically Low Cut, Mid and High controls. The Mid and High bands offer both cut and boost (±6dB), and the Low Cut filter can be switched off or set to either 80Hz or 100Hz. An additional Acoustic Space switch offers 0, ‑3 or ‑6 dB of low‑frequency attenuation to compensate for placement relative to room boundaries. 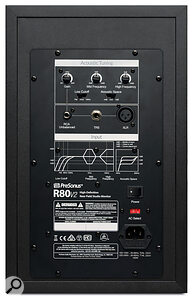 The R80 V2 adds a range of EQ options, including a low‑cut filter, mid and high EQ, plus a three‑position room placement compensation switch.Housed in a ported two‑way cabinet measuring 241 x 309 x 379 mm weighing a reassuring 9kg, the R80 V2 is driven by a pair of updated Class‑A/B amplifiers delivering 75 Watts to the woofer and 65 Watts to the tweeter, crossing over at 2.6kHz. The R80 V2’s eight‑inch woofer features a rigid, custom‑woven composite cone with a slightly concave dust cap, with the aim of producing more consistent dispersion across its frequency range. The moulded baffle has a somewhat angular appearance and sits at the front of a conventionally plain box with a black vinyl finish.

There is a range of connection options, comprising a balanced quarter‑inch TRS jack, a balanced XLR and an unbalanced RCA phono socket, all operating at line‑level. Power comes in on the usual IEC socket, there’s a separate power switch, and a front‑panel LED shows when the speaker is powered up. The operating voltage is selectable via a recessed slide switch.

On paper the speakers cover the frequency range 40Hz to 22kHz at the ‑3dB points, while the maximum SPL at one metre is 107dB, and the A‑weighted signal‑to‑noise ratio is better than 100dB.

Because of the wide, shallow dispersion of these speakers, it is important to get the tweeters aimed at your head in the vertical plane. If you have them aimed too high or too low, you may lose a little of the HF. Get them right though and you’ll be rewarded by a detailed sound completed by firm lows. While the bottom end isn’t as tight as you might expect from a fully-sealed cabinet, it doesn’t display excessive overhang, so dry kick drums don’t suffer excessive smearing. I rolled the HF back just a hint to get the sound sitting comfortably in my own room though, as the speakers sounded a little too bright in the ‘flat’ setting.

Voices come over with plenty of presence and detail, and the stereo imaging is good too, placing centre‑panned sounds solidly between the two speakers. As with many ‘affordable’ speakers, the lower midrange is slightly coloured due to small resonances, but again there’s nothing that worries me too much given their price, and I’d feel very comfortable doing a mix on them. There’s more than enough level for close‑range monitoring, and the only extra I’d suggest is a pair of decent monitor platforms, especially if you plan to put the speakers on your desk or on a shelf. Overall then, a worthwhile update to the original R80.

As a deal‑sweetener, PreSonus include a special edition of their Studio Magic software suite with their studio monitors. The bundle includes their Studio One Prime DAW and a large collection of plug‑ins, loops, virtual instruments, effects and tutorials. All the included plug‑ins come in VST, AU and AAX formats.

These are very detailed monitors with a wide sweet spot and no unacceptable faults given their price, though you may need to tweak the EQ settings to tame their slightly forward character.