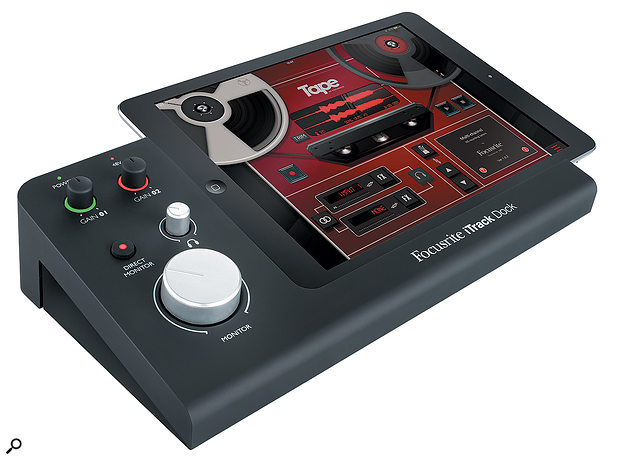 With the launch of the iTrack Dock, Focusrite are attempting to establish some ‘grown up’ standards so that musicians can make music on their iPad using any Core Audio-savvy application, without having to worry about whether the mic amps are good enough or whether the bit-depth is adequate.

Essentially, the iTrack Dock is a two input, two output audio and USB MIDI interface and some basic monitor control capabilities built into an ergonomically shaped plastic dock. It draws its power from the included power adaptor, enabling it to power and charge the iPad through the USB port. That said, it didn’t seem to want to power my little Korg Micro keyboard, which runs happily on my laptop. By contrast my Edirol PCR300, which is a lot bigger and has loads of LEDs, seemed to be happy. Checking the Focusrite web site brings up a list of tested compatible MIDI devices that include many models from Novation, Alesis, M‑Audio and Akai, with the majority of what’s out there apparently being fine. Sadly the Korg Micro Keys is listed as being incompatible, and when I enquired why, the reason I was given is that it appears to the iPad as a USB hub and the implementation is only for straightforward USB MIDI devices, which most third-party MIDI controllers are.

All of the connections other than the headphone output are on the rear panel and include two XLR mic inputs and two line-in sockets. Phantom power is switchable for use with capacitor mics and the two line inputs are augmented by a separate high-impedance instrument DI jack for the second input channel. The monitor outputs are on stereo quarter-inch jacks and the headphone socket is found at the right-hand side of the enclosure with its own level control. A sliding Lightning connector accommodates both iPads and iPad Minis, as well as iPad Airs, but sadly there is no adaptor for earlier iPads. If a full-sized iPad is fitted, it hangs out over the top and right-hand side of the unit, whereas an iPad Mini exactly fits the outline of the case.

The iTrack Dock’s dynamic range is specified at 105dB with a maximum sampling resolution of 24-bit and 96kHz. In addition to the phones level control, you get a large volume control knob for the monitor outputs, separate gain controls for the two mic amps and a direct monitor button that adds the output from the preamps directly into the monitor mix for zero-latency source monitoring. LEDs indicate power and global phantom power when applied. For level metering, Focusrite have taken the halo level display from their Scarlett range (green for enough signal, red for too much) and added this to the surrounds of the two gain knobs. This will give you a rough guide, but you should always go by your DAW meters if possible. If you don’t have a suitable recording app you can download Focusrite’s Tape app free of charge from the App Store, although GarageBand seems like a logical choice for more serious compositional work.

No drivers are needed to get the iTrack working — you just slot in your iPad, start your app and you’re ready to go. Both the instrument and mic inputs are clean and enjoy impressively low distortion. What I initially thought was a very low-level hum when miking at a distance turned out to be the tumble drier running two rooms away! There’s bags of headphone level and the direct monitoring also works fine, with the proviso that you may need to juggle your DAW output levels to get the right headphone balance as there’s no DAW/direct mix control. So, other than the incompatibility with my Micro Keys USB MIDI keyboard, the iTrack Dock checks out as being a serious piece of kit.