Competition heats up at the affordable end of the three-way monitor market with the release of Fostex's new PM641s. Are they an improvement over their two-way cousins? 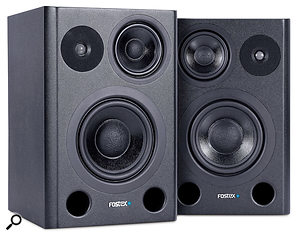 I've always been impressed by the performance of Fostex's PM-series monitors, especially given their entry-level pricing, but the majority of the ones I've looked at have been two-way systems. More recently, Fostex launched the PM841 three-way active speaker, which, as the name suggests, features an eight-inch bass driver. The speaker under review here is the PM841's little brother, the PM641 — the name of which suggests that it uses a six-inch woofer. Actually, it's a 6.5-inch driver, but then they'd hardly call it the PM 6.541!

The 641's Kevlar-composite woofer is powered by a 50W amp, teamed with a four-inch mid-range driver using the same cone material and powered by an 18W amplifier. A 0.75-inch UFLC (Urethane Film Laminated Cloth) dome tweeter, again with 18W of power behind it, looks after the high end. In larger three-way systems, a separate mid-range driver is beneficial, as it reproduces the critical mid-range frequencies that a large woofer and small tweeter may struggle to cover adequately between them. Whether that is a necessity on a system with a 6.5-inch bass driver is open to debate, but Fostex clearly had their reasons for taking this route.

The benefit of a three-way system, then, is that the mid-range driver can concentrate on handling only the mid-range frequencies, but the down side is a higher cost, as there's an extra power amp and driver, and the extra complexity of having two crossover regions to manage rather than just the one. Interestingly, the spec sheet for this model is very light on information and the crossover frequencies are not divulged. The monitors' frequency response is quoted as 55Hz to 25kHz (±3dB), but no maximum SPL is given. 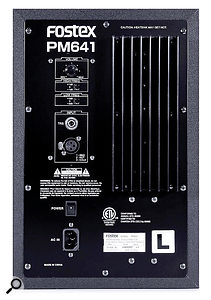 The PM641's back panel, with HF and LF controls, an input level knob, and both jack and XLR inputs.The PM641s come as a mirror-image pair marked Left and Right, with the tweeter and mid-range driver mounted side by side above the bass driver. This helps to keep the box size small, but throws away the time-alignment benefits of having all the drivers mounted on the same vertical line. On the other hand, it makes it more likely that the speakers will perform adequately well on their sides, although the manual advises against this, as vertical mounting allows better airflow over the finned heat-sink.

Inside the box, the bass and mid-range drivers have separate cavities, and the bass cavity is ported via two circular vents at the bottom of the baffle. The cabinets, covered in a tidy black-plastic foil, each measure 249 x 376 x 290 (mm) and weigh 11.4kg.

Mains power comes in on the usual IEC connector, and a blue power LED on the front panel lets you know when the speakers are powered up and switched on. Audio inputs are on both balanced XLR and quarter-inch TRS jack sockets, next to which are two three-way switches, which change the speakers' response to allow some degree of tuning for the room and to suit user preference. At the HF end, there's 1dB of 10kHz shelving boost or cut on offer if you don't like the flat setting, and at the low end there are options to either cut or boost at around 60Hz by 3dB, to help compensate for placement relative to walls or corners. Level is set using a detented rotary control.

My initial observations were made with my 'Mr Niggly' hat on, taking little account of the cost of the speakers. Set up in my own studio at a distance of around one metre, their bass end came over as reasonably punchy but with that slightly false 'bouncy' quality that comes from using porting to extend the bass response of smaller cabinets. In comparison with my main studio monitors, there was also a lack of really deep bass — the response seemed to fall off fairly quickly below the range of kick-drum thump. That mid-range driver ensures that the vocal sound is well focused, and also helps to keep everything decently separated, but the small tweeter exhibits a slightly reedy quality, which is most evident on electric guitars.

On the plus side, and taking off my Mr Niggly hat, the overall tonal balance is good, and such shortcomings as the speakers have only make you work harder to get a good mix. I also had no issues with the stereo imaging, which was both wide and stable. The overall sound is fairly smooth and non-fatiguing, which bodes well for longer mixing sessions, and there's enough level for sensible nearfield work if you're set up only a metre or so from them.

Compromises are inevitable in all loudspeaker designs, but become more evident at the lower-cost end of the market, so Fostex are to be complimented on being able to deliver this degree of quality for the price. That said, my personal preference would be for the two-way PM-series monitors. While the larger PM841 might be able to justify its three-way rationale, I'm not sure that any performance benefits of adding a mid-range driver to this six-inch system justify the additional cost over an equivalently sized two-way monitor.

Alternatives to the PM641s should be judged on price and sound quality rather than on the basis of being three-way speakers. That leaves Fostex's existing PM-series monitor in the frame, along with the perennial Alesis Monitor One MkII Active, Prodipe's desktop range and any smaller monitors from Tannoy. KRK also have powered monitors, such as the Rokit RP6, that perform well in this price range, so there's no shortage of choice.

Once again, Fostex have managed to deliver a good price/performance ratio, although their own two-way PM-series monitors may provide the newcomers' strongest competition.