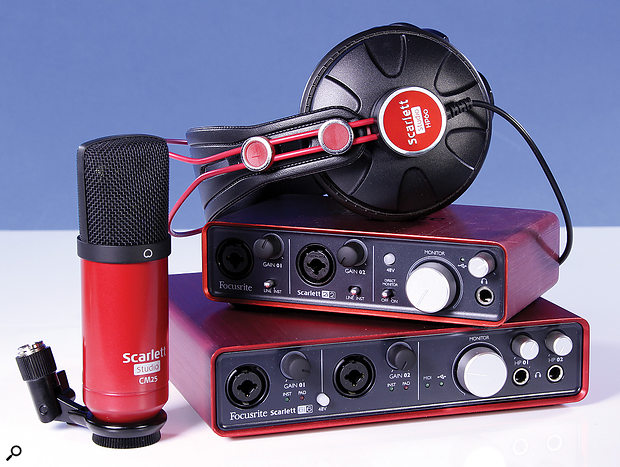 Do the latest additions to the Scarlett range nail the balance between quality and affordability?

Focusrite started out as a high-end audio company building no-compromise mic preamps for the likes of Sir George Martin's Air Studios, and while the company still build such exotic devices, these days a lot of what they make is aimed squarely at the recording musician. A case in point is the Scarlett range of audio interfaces, which feature Focusrite microphone preamps. Although these aren't the ones that George Martin would have bought all those years back, they are still designed with integrity and deliver a high level of performance, given their low cost.

We've got two on review here today: the Scarlett 6i6 and the Scarlett 2i2. The latter, when packaged with a CM25 condenser mic and a pair of HP60 headphones, also forms the centrepiece of the Scarlett Studio bundle.

The Scarlett 6i6 is a six-input, six-output USB 2 audio interface operating at 24-bit and at sample rates of up to 96kHz. It works with both Windows PC and Mac, and may also be used with an iPad via USB 2 and the Apple Camera Connection Kit. Power comes from a supplied power adaptor and there's a slot on the rear panel for fixing a security kit.

Two of the 6i6's inputs feature mic preamps and are fitted with 'combi' sockets that can accept XLR mic-level signals, or line-level signals on the centre jack section. Phantom power is applied to both using a switch (which lights up in red when the phantom power is on) mounted between the channels. The line inputs can also accept high-Z instrument sources via switching in the bundled MixControl software.

The other inputs include a stereo pair of line jacks on the rear panel, alongside a coaxial S/PDIF digital port. On the output side, there are four balanced line outputs and an S/PDIF digital output, so if you have no digital devices to connect you still have the potential to connect four analogue inputs and outputs. Also on the back panel are the 6i6's MIDI I/O ports.

For monitoring purposes, there are two built-in headphone outputs with separate level controls. All this is built into a rugged but attractive anodised-metal chassis, finished in a fetching shade of red with black panels. Focusrite have also taken a stylish approach to level metering: the two gain controls are fitted with LED rings that show green when the level is in the right range for recording, but turn red when the gain is set too high. If the input level is too low, they stay dark. In combination with the meters in your DAW, this should be more than adequate to ensure suitable recording levels. There are also status LEDs for Pad and Instrument selection, as set via the MixControl software. Finally, a green Status LED on the front panel monitors MIDI activity, while another confirms that the USB connection has been established correctly.

One frustration caused by earlier generations of audio interfaces was that many had no simple means of adjusting the level of the outputs feeding the monitor speakers, so users had to buy a separate monitor controller. While a monitor controller still offers certain benefits, such as talkback, source switching and monitor switching, Focusrite have at least provided a large level-control knob for adjusting your monitor level on the 6i6. The MixControl software also allows for monitor muting (both independently for the left and right channels and globally), as well as monitor dimming. It is also possible to 'mono' the monitor feed, which is always useful.

While you can simply plug in the Scarlett 6i6 and use it as a straightforward interface, that would be to miss out on the benefits of its MixControl software, which incorporates a very low-latency DSP mixer and routing section. A source monitoring latency of under 1.4ms is possible using MixControl.

And there's more. No self-respecting audio interface comes without at least some freebie software and the 6i6 comes with Ableton Live Lite, the Scarlett Plug-in Suite, the very worthwhile Novation Bass Station soft synth and a selection of Loopmasters samples. The Scarlett Plug-in Suite supports VST, AU and RTAS formats and provides compression, reverb, gating and EQ, while the Novation Bass Station synth supports AU and VST formats.

Before looking at the operational side of the interface, it's worth casting an eye over the technical specifications, as they are not unimpressive. The output converters manage a 106dB A-weighted dynamic range on outputs 1/2, and a couple of dBs better on outputs 3/4. The input dynamic range is 109dB A-weighted for all inputs. Sample rates of 44.1, 48, 88.2 and 96kHz are available, and the clock jitter is specified as better than 250 picoseconds.

On the analogue side, the preamps deliver a 20Hz to 20kHz frequency response that's flat within half a dB, while the THD+Noise is shown as -96dB for signals 1dB below digital full scale. The line inputs manage 105dB at minimum gain with a 50Ω termination. The maximum line input level is just over +28dBu before clipping occurs, so there's plenty of headroom.

The 6i6's back panel features a power switch and an input for an external 12V PSU, MIDI I/O ports, and — all on quarter-inch jacks — four outputs and two line inputs.

The support software can be downloaded once you register the interface, and entering the bundle code found on the included paperwork gets you the authorisation codes for the additional software. Opening the MixControl software shows a mixer where any of the available inputs on the interface can be selected for source monitoring and may be mixed with the output from the DAW. Tabs allow up to four different mixes to be set up, and any of the outputs can select any of these mixes for monitoring purposes.

A status section shows the sample rate, sync source, sync lock status and USB driver status, with the output monitor section to the right. Each mixer input can be soloed, muted, linked in pairs for stereo use and monitored pre-fader, while metering shows the input level. A horizontal slider at the top of each channel acts as a pan control.

After I'd installed the software, everything worked first time, once I'd selected the Scarlett 6i6 as the active interface in Logic Pro. I found that it recorded and played back reliably at buffer sizes down to 32 samples, which gives a round-trip latency of just 6.3 milliseconds at 44.1kHz. Recordings via the mic input were as clean as I could hope for and everything was gratifyingly fuss-free. I wish there was more to say, but really, it did just what it said on the box, with no hassle whatsoever. When you consider the low cost of this interface and the added attraction of the included software, it is hard not to be impressed.

The back of the 2i2 is a Spartan affair featuring just a USB port and two line outputs on quarter-inch jacks. There's no option for the unit to be powered by anything other than USB.

For those needing only the ability to record two inputs at a time, the slightly simpler Scarlett 2i2 interface might be an attractive proposition, especially as it is now available as part of the Focusrite Scarlett Studio bundle. This comprises the 2i2 interface, a cardioid-pattern capacitor microphone, a pair of headphones and a copy of Cubase LE6 DAW software. You even get a matching red mic cable, a mic clip and a USB lead, so if you already have a Mac or Windows PC computer, the box includes absolutely everything you need, other than a mic stand, to start recording and mixing. A supplied data DVD carries all the support software and the necessary drivers, although it's always worth checking the Focusrite web site for updates.

On a technical level, the performance of the 2i2 is very similar to that of the 6i6, but it has no MIDI or digital I/O. Once again, sample rates up to 96kHz at 24-bit are supported. There's also no fancy console software; you just plug it in and get on with the job. It's worth noting that as the Scarlett 2i2 relies on USB for its power, it can't be used with an iPad or similar device via the Camera Connection Kit.

The 2i2 has two output jacks on the rear panel for feeding monitor speakers, as well as a built-in headphone amp with its own level control. Its two channels can accept mic-, line- or instrument-level signals via combi connectors on the front panel. Toggle switches select between instrument and line operation when plugging into the centre jack section. Global 48V phantom power can be switched on or off, and there's a direct monitoring switch that allows the input sources to be heard mixed with the DAW output, to eliminate latency while tracking. There's no DAW/Direct balance control, so you'll need to turn down the DAW's master output level to achieve the desired monitoring balance. A large knob controls the speaker output levels, while the phones level control is much smaller and is located directly above the phones jack. As with the Scarlett 6i6, those green/red rings around the gain knobs give a general idea of the signal level, although the meters in your DAW are the ones that matter.

The Scarlett Studio In Action

Setting up the system was no more complicated than plugging it in and selecting the Scarlett 2i2 as the active audio device. Alhough the headphones and mic are both budget items, the phones turned out to be comfortable, with sound quality that was rather better than expected. They are fully enclosed, so are well suited to tracking, but they also sound clean enough for general mixing duties. There was no hint of USB bus noise in the headphone mix when I was using my MacBook Pro laptop.

You can't expect a fantastic studio mic in a bundle of this price, but what you do get is a three-quarter-inch-diaphragm capacitor mic that is adequately quiet for typical studio work and that delivers a well-balanced sound on vocals and instruments such as acoustic guitar. Realistically, it performs in the same league as other budget capacitor mics, most of which are actually pretty good these days. I certainly wish I'd had a mic this good when I started out!

As a bundle, the Scarlett Studio has to be considered something of a bargain, especially given the price it is actually selling for on the street. Add the cost of a suitable computer and you'll have a working recording studio for less than the original cost of the obsolete DAT machine now languishing in my cupboard of eternal darkness. Recommended.

In this price range, many alternative interfaces are available from companies such as Presonus, Tascam, M-Audio, Emu and Roland. The Native Instruments Komplete Audio 6 interface is a close equivalent to the Scarlett 6i6 in terms of I/O and price while the PreSonus Firestudio Mobile Studio Bundle (which includes two pencil microphones) is probably the closest equivalent to the Scarlett Studio package.

The Scarlett range continues to grow and, in addition to the models reviewed here, now includes the following units:

Both these Scarlett products deliver clean, fuss-free audio, and include all the essential features without over-complicating things with unnecessary frills. The Studio bundle is particularly attractive to those starting out, or for setting up education workstations.