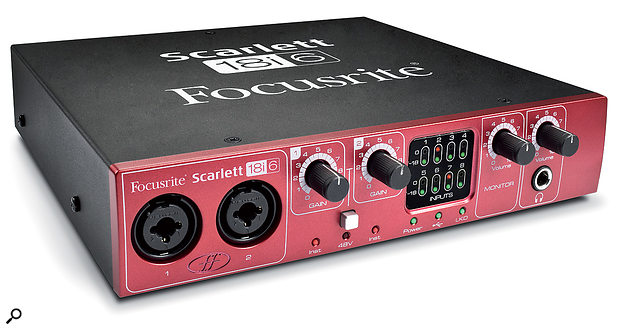 In the new Scarlett range, Focusrite have teamed their Saffire technology with USB interfacing.

Focusrite's Saffire range of interfaces has been hugely popular with home-studio musicians, offering them some of the best preamps in the price range, and (at least since the first model) very stable drivers on both Mac and PC. You can read my review of the Saffire at /sos/aug09/articles/saffirepro24.htm.

The Saffire interfaces, though, all hook up to your computer via a Firewire connection. Not only can Firewire devices be a bit choosy about the chip set of the Firewire card installed in your computer, but Firewire also seems to be being phased out by computer manufacturers. We're a long way from Firewire being dead yet, but increasingly manufacturers seem to be offering USB options. Focusrite's new Scarlett range does just that, replacing Firewire with USB 2 as the data communication protocol. I was therefore keen to see how the performance of the Scarlett range compared with their Saffire siblings.

Despite the change of livery, to red, the Scarlett 18i6 looks very much like similar Saffire interfaces, but as well as the replacement of Firewire with USB, this model offers I/O options that are unique amongst the two interface ranges.

As the name implies, the 18i6 has a total of 18 audio inputs and six audio outputs. Eight of the inputs are analogue, six being line level. The other two offer the option of mic, line or hi-impedance formats. Phantom power is available on the two mic channels, and is switchable globally. The remainder of the inputs are digital, comprising an eight-channel ADAT port and stereo S/PDIF connector. The six outputs are presented as a pair of analogue jacks, a stereo headphone jack, and a stereo S/PDIF connector — there's no ADAT output. Unlike some competing small interfaces, the 18i6 also includes 16 channels of MIDI I/O on standard MIDI five-pin DIN connectors. This configuration should make the interface a good starting point for the serious home studio owner.

The ADAT and S/PDIF ports mean that you can easily expand the interface at a later date with more I/O. (Given the lack of ADAT output, though, you'll only really benefit from expanding the system with more recording inputs — hooking up a few outboard compressors isn't going to be on the cards.) The supplied software should also increase the Scarlett's appeal: Focusrite's Xcite bundle (which features Ableton Live and the Novation Bass Station soft synth) and their Scarlett plug-in bundle are included. so there's everything you need to get up and running quickly.

The A-D and D-A converters can operate at up to 24-bit word lengths and sample rates up to 96kHz, and both have a healthy A-weighted dynamic range: 110dB for the A-D and 106dB for the D-A. The mic preamp spec is impressive, given the price of this interface — but there's detailed info on the Focusrite web site, so I won't dwell on that here.

Installing the driver software and connecting the Saffire 18i6 to my Windows 7 64-bit PC (the software is also compatible with Mac OS 10.6 and 10.7, but not earlier versions of OS X), everything worked smoothly after a mildly disconcerting false start.

The thing I was most interested to discover was whether latency performance had been affected by the move to USB. Latency is important when playing software instruments live, and when setting up artist monitor mixes while tracking. It's less important if you're mixing, of course — unless you're trying to control things in real time with a control surface!

Presumably in an attempt to ensure that users install the latest drivers, and so don't suffer from any bugs that might be lurking in earlier versions, Focusrite have opted to make the Scarlett Mix Control software available only via a download. That's very sensible when you stop to think about it, but when opening the box, I was presented with a Scarlett 'Resources CD' version 1.1. Following the instructions on this successfully installed the device, but left me with a whopping 35ms latency on the input and output, which I was unable to tweak. This would obviously have been no use at all for anyone wanting to play rather than program soft synths, for example.

A quick trip to the Focusrite web site bore fruit: the latest driver, complete with Mix Control software, allowed me to set latency as low as 3.36ms (input) and 4.38ms (output). Playing drums via BFD, I could hear a few crackles at that setting, so I backed it off to 5.35ms (input) and 7.37ms (output). Rather cheekily, Focusrite's driver software seems to round all figures down to the nearest 0.1ms, so that 4.38 reads 4.3, for example!

Still, that second setting was absolutely fine for playing soft synths, and probably would have been even using electronic drums to trigger a software drum instrument live. As any latency in the monitor mix can really affect the feel of a drum part, if it was a problem with electronic drums — and I'm not saying it would be — I could easily have lived with the odd pop and crackle while recording such parts via MIDI.

The Mix Control software will be familiar to anyone who's used one of the Saffire interfaces. I've discussed that before, so I'll just say that it's a useful and capable piece of software that sits between your DAW and the physical controls of the interface. It controls a DSP mixer that, amongst other things, allows you to set up multiple monitor mixes, and includes useful basic monitor-control facilities such as left and right channel mute, dim and the like. Once you get your head around the routing, it's a really useful piece of software.

The excellent spec, performance and pricing of the Saffire range has successfully made the move to USB. Being familiar with Focusrite's Saffire range, I didn't really learn anything new from using this interface — but that's a good thing, as you really just want the interface to work. The drivers seem stable, and the latency performance will cause no problems. The bundled extras are attractive, and the I/O options are perfect for anyone starting out who wants to keep their options open for expanding the analogue I/O count in future. Ideally, I'd have liked to see an ADAT output too, but that would presumably have added to the price and many users won't need it. All in all, then, I've no hesitation in recommending this device, as long as the provided I/O meets your needs.

Interfaces with a similar spec are available from PreSonus, M-Audio and a number of other manufacturers. There's also Focusrite's own Saffire range, of course. Which is best for you will depend very much on which I/O options meet your own needs, and on if it matters to you whether the interface connects via USB or Firewire.

The 18i6 is not the only audio interface in the Scarlett range. If your I/O options are more modest, you could consider the 2i2 model (£119$149), which offers two analogue inputs and two analogue outputs, in addition to a headphone output.

Sitting between this and the 18i6 is the Scarlett 8i6 (£239$249), which offers six line inputs and two line outputs, as well as S/PDIF I/O, a headphone jack, and MIDI I/O. Like the 18i6, these both use an external power-supply unit and connect to the computer via USB.

Excellent value for money again from Focusrite. The Saffire technology has succeeded in making the transition to USB, and it's hard to think of anything that offers the same I/O and quality at this price.