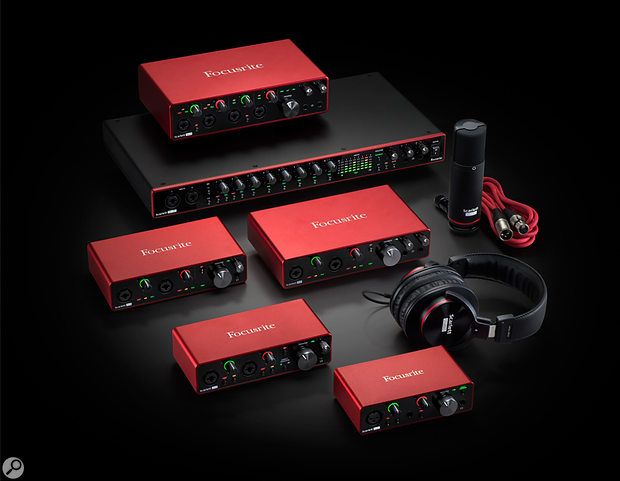 The latest generation of Focusrite's extensive Scarlett range offers something for every budget.

Seek them here or seek them there, you don't have to look very far to find Focusrite's Scarlett interfaces. From the compact and portable Scarlett Solo to the versatile Scarlett 18i20, this is a range that caters to most home-studio needs; and since their introduction in 2011, these modestly priced USB devices for getting audio into and out of a computer have carried all before them.

Competition is fierce in this market, and in 2016, Focusrite renewed the Scarlett range to reflect buyers' ever-increasing expectations in terms of sound quality, features and low-latency performance. Three years on, they've repeated the exercise to create the third generation of Scarletts.

The headline features second time around were mostly on the software side of things, with new USB drivers offering much–improved round‑trip latency, and the old Mix Control utility superseded by the Focusrite Control package that is now employed across all of Focusrite's interfaces. For the third generation, the focus has shifted back to hardware development: driver performance is largely unchanged, and the only major development relating to Focusrite Control is that it's now usable with all of the models in the range, not just the 8i6 and up. Focusrite have, though, made it easier for beginners to get started with their Scarletts by developing a new 'onboarding' process (see box).

The third-generation Scarletts are still USB devices, but whereas previous generations were fitted with USB 2.0 type–B sockets, these have been replaced with current type‑C connectors. However, Focusrite's research shows that most users are still connecting their interfaces to computers with the older USB sockets, so the cable that comes with the Scarletts has a type‑C plug at one end and a type–A plug at the other. This will change as take-up for the newer standard increases on host machines.

There are also hardware improvements across the range, mostly relating to the inputs. The preamps have an extra 6dB gain range over the second-generation Scarletts' 50dB, dynamic range on the analogue inputs has been raised from 109dB to 111dB, and total harmonic distortion has been reduced on all analogue I/O. All the Scarlett preamps now feature the Air option found on Focusrite's premium Red and Clarett interfaces, which adds high-end excitement in a fashion that is intended to emulate their classic transformer-based ISA preamp design.

As well as these welcome global improvements, the six individual models within the Scarlett range have also acquired new features over their predecessors. The baby of the range, the Solo, now has balanced TRS outputs, while the next model up, the 2i2, gets stereo direct monitoring. Both are also available as part of a 'Studio' bundle, which includes a cardioid capacitor microphone, a pair of headphones, and an XLR cable. The old 2i4 has been replaced with the 4i4, which adds a pair of dedicated line inputs. The 6i6 has likewise received an extra pair of line ins to become the 8i6, and both the 8i6 and 4i4 now offer loopback inputs for recording audio from other Windows or Mac sources to your DAW.

The biggest improvements, though, have been reserved for the two models at the top of the range. As well as the above-mentioned loopback inputs, the 18i8 now has an additional pair of TRS line output sockets and alternate speaker switching, while Focusrite have really gone to town on the top-of-the-tree 18i20, which receives alternate speaker switching, switchable pads on all eight mic inputs, and an extra optical input and output to allow eight channels of ADAT-format digital audio to be accommodated at high sample rates. Both models also now have a built-in talkback mic with associated front-panel button. 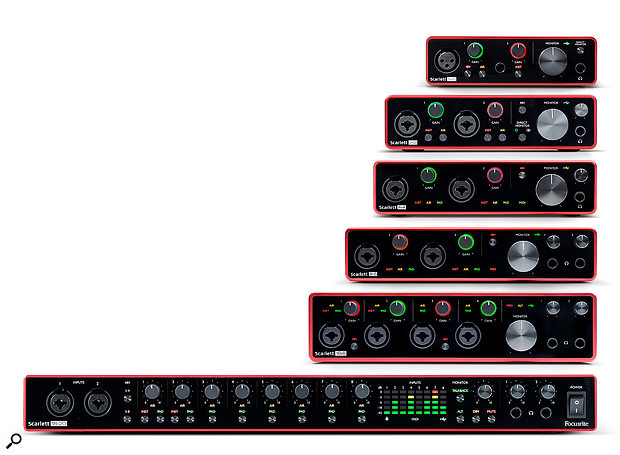 Focusrite sent no fewer than three Scarletts for review: the 2i2, 8i6 and 18i20. All three feature build quality that is extremely good for the price, and the 18i20 scores over many of its rivals by having a built-in PSU. Unlike the second-generation 18i20, it also has removable rack ears, which makes things neater for desktop use. The gain and volume pots — now arranged in a single line rather than staggered — are nicely weighted and smooth, without too much gain bunching towards the top end of the dial, and all the buttons have clear red and green labels that illuminate when activated. (The only slight gotcha here is that the phantom power setting is  not remembered on powering down, so you'll need to re-enable it if you shut down the Scarlett during a session.)

Most of the new features are self-explanatory, and where they're not, they're usually implemented in the simplest way possible. For example, alternate monitoring on the 18i8 and 18i20 is basic but perfectly effective. Enabling speaker switching in Focusrite Control repurposes line outputs 3–4 to carry the same signal as the first pair, and a front-panel Alt button selects which of them is active or muted at any given time. The main front-panel Monitor level control governs both sets of outputs at once. It's not possible to specify a volume offset so that the main and alternate speakers can be level-matched from the Scarlett, but if that's important to you then it can usually be achieved further downstream anyway. For myself, the only monitoring feature I still miss is a mono button, but then I suppose Focusrite had to leave something for the fourth generation! (For the sake of completeness I should also mention that the firmware version I tested had a bug in it whereby enabling and then disabling speaker switching could lead to outputs 1–2 and 3–4 carrying the same signal and both being active simultaneously, but Focusrite are aware of this issue and have a fix in the works.) 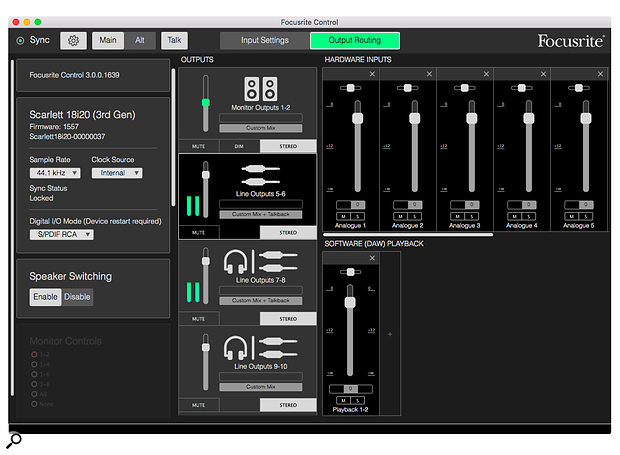 Enabling speaker switching in Focusrite Control causes line outputs 3–4 to disappear from the Output Routing page: these now mirror outputs 1–2 and are selected with the Alt button. In this screenshot, talkback is active, and outputs 5–6 have been selected as a destination for the talkback mic.

The new talkback feature is likewise only as complicated as it needs to be. As before, each output or pair of outputs in the Focusrite Control utility can either be configured to accept a 'custom mix' of input and DAW playback signals, or be directly assigned a DAW playback channel or input to mirror. The new version adds a fourth option labelled 'Custom Mix + Talkback'. Any outputs set to this mode will receive the signal from the built-in talkback mic as well as their own balance of input and playback signals; this includes the loopback output, which should make it possible to record the talkback mic if needs be. Activating talkback automatically dims any outputs to which it's routed, even if they're not selected as monitor outs in Focusrite Control.

The front-panel Talkback button operates only in momentary mode, but the Talk button in Focusrite Control is latching, while the mic itself operates at fixed gain and there's no option to substitute it with an external mic. Again, though, the benefits of simplicity almost certainly outweigh the usefulness that any extra choices would bring in this area.

Anyone in search of a high-quality, inexpensive USB audio interface will find something to meet their needs in the third-generation Scarlett range.

There wasn't much wrong with the mic preamps on the second-generation Scarletts, and their 50dB gain range was adequate for the vast majority of recording contexts. But at the bottom end of the scale it was possible to run into clipping with loud drummers, while at the other extreme, the maximum gain available wasn't always enough for the quietest sources. The addition of switchable pads on the 18i20 nails the first issue once and for all, and the extra few dB at the top of the range certainly helps with the second, though podcasters with SM7s and quiet voices might still want to lay their hands on a Cloudlifter or similar device.

The Air feature is clearly proving popular, as Focusrite have now rolled it out across all of their interface ranges. In practice its main effect is to add quite a noticeable high-frequency boost; very often this simply anticipates what you'd have done at the mix anyway, but you do need to be careful with sources or mics that already have a lot of top end. (Note that the new Scarlett preamp circuit is not the same as that found on Focusrite's Clarett and Red interfaces, though: switching Air off on the Claretts changes the input impedance, whereas the new Scarlett preamps remain at the Air impedance.)

All in all, I think Focusrite have come up with a pretty compelling package of improvements for this new generation of Scarletts. The star of the show is undoubtedly the 18i20: the extra gain range and pads make it a more versatile studio workhorse, the second ADAT port allows you to operate at 96kHz with no loss of functionality, and the simple but effective speaker switching and talkback do exactly what most small studios would want from such features. Audio specifications are very good for the price, and if they still don't quite match those of the more expensive Clarett range, they're still way better than was the norm only a few years ago. In fact, I can imagine the 18i20 stealing more than a few sales from Focusrite's own Clarett USB models, which are quite a bit pricier and lack the speaker switching, talkback and input pads. And while the second-generation Scarletts remain very capable units, I think these new models will be a tempting upgrade for anyone still using first-gen models.

All in all, anyone in search of a high-quality, inexpensive USB audio interface will find something to meet their needs in the third-generation Scarlett range — and even if you've budgeted for something more upmarket, a look at the 18i20 may convince you that it'll do everything you need an interface to and save you money into the bargain.

The most obvious competition for the Scarlett interfaces comes from PreSonus's Studio range, which now includes no fewer than 12 different models, and Steinberg's UR series. Zoom's UAC2 and UAC8 are also worth investigating, while Tascam and Roland are among the other manufacturers making interfaces that are comparable to at least some of the offerings in the Scarlett range.

There's a big learning curve associated with getting started in recording, and figuring out how an audio interface should be set up can be one of the more frustrating challenges along the way. With the new Scarletts, Focusrite are hoping to ease the path, courtesy of a cleverly thought-out 'onboarding' procedure.

When you buy a Scarlett interface and plug it into your computer, it will initially appear not as a USB audio device but as a mass storage device that can be mounted as a drive. This will contain a clickable link that guides new users not only through the driver installation process, but also through the various bundled software options, helping for instance to decide whether Pro Tools First or Ableton Live Lite might be the most appropriate recording package for their needs.

The third-generation Scarlett interfaces incorporate a very impressive package of upgrades that will keep them right at the front of the pack for some time to come.