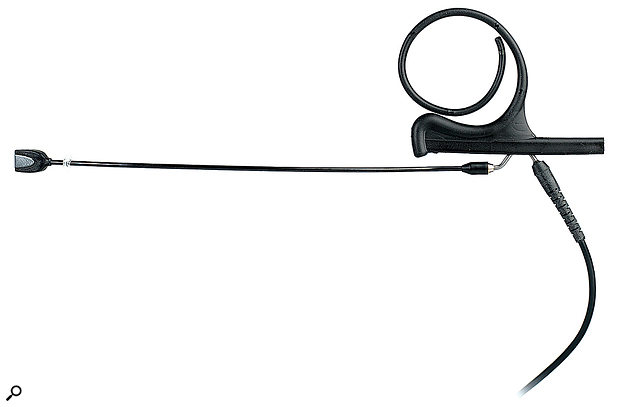 The latest headset mic from DPA is designed to offer crystal-clear vocals and a rock-solid, discreet fitting.

The d:fine is the latest headset microphone from well-respected manufacturer DPA, whose high-quality mics are often used in professional live performances. The d:fine follows the ubiquitous DPA 4066 and 4088 models, and is aimed at providing the same uncompromising live sound quality, together with significant improvements to its physical characteristics, both in terms of appearance and mounting design.

The d:fine is available with either an omnidirectional or a directional cardioid capsule, and comes in a choice of colours: the traditional black, beige or brown, and a funky lime-green version, which is certainly eye-catching. For this review I received a black and a beige d:fine mic, one with each pickup pattern.

Straight out of the packaging, it's clear that quality is something the Danish manufacturers take very seriously. The case in which the mic kit is supplied is expensive-looking in itself, and is very nicely made from a moulded material (I'd guess it's some kind of rigid expanded polystyrene) with a grey fabric covering. It's reminiscent of an expensive instrument case, and is light but has easily enough strength to provide excellent protection against drops and general rough handling.

Inside the case, there's a secure mounting point that holds the headset assembly in place. This lifts to reveal a generous space where the coiled cable, adaptors, batteries and an associated transmitter pack can be stowed. The lid section has a pocket where I found the mini-manual, an instruction card detailing how to wear the headset properly, and two little packets of accessories.

With microphones at this price point — and from a specialist manufacturer with such pedigree and reputation ­— you'd rightly expect excellent audio quality, and I'm sure that the d:fine mics won't disappoint existing users of the industry-standard 4066 and 4088. A brief run through the published specification of these permanently-polarised condensers tells us that frequency response for the omnidirectional version is 20Hz to 20kHz. measured at ±2dB (with a gentle boost between 8 and 15 kHz), while the directional model has a curtailed LF response up to 100Hz and a dynamic range of 95dB, which is more than acceptable for head-worn vocal use.

One thing that sets high-end headset mics apart from the budget kind is their ability to properly accommodate relatively high sound-pressure levels, and the d:fine is rated for a maximum SPL of 144dB. I found that both variants handled loud sources very well; I even tried close-miking a trumpet, as I couldn't actually get them to distort using vocal sound sources.

I've owned and used various different designs of headset mics over the years, and to some extent I've both loved and hated them all, as have my clients. Many stage performers, especially in theatre and formal concert settings, are uncomfortable when asked to wear dual-ear headbands, especially if they're not used to doing so.

Single-ear fittings are generally less obtrusive but are also often less secure, and I've had to use face tape with them on many occasions. This makes the performer more aware of the mic and therefore more likely to fiddle with it, or become irritated by having to use it.

The nightmare scenarios for headset mics include fight scenes, energetic dance routines and other scenes of a more intimate nature. These are the situations that leave you wishing someone would invent a single-ear boom fitting that is really light, small, discreet, secure and also easy to put on and remove in a hurry if necessary. Well, guess what: someone has invented just that!

The whole d:fine assembly is very light indeed (8.5g), and the capsule and ear-hook ends are well-balanced, which eliminates 'droop' problems. The piece that fits around the ear is a very clever design and, unsurprisingly, is also very simple: a piece of soft, loosely-coiled spring material loops over the top of the ear, while the very end of it rests lightly against the ear itself. It's very simple to visualise this method once you've seem the mic mount, but you really have to feel the softness of the material to appreciate how easy it is to wear.

In The Dressing Room

I took the d:fine mics along to a couple of rehearsals and a concert, and asked various people to try them on. The first and most noticeable result was that they found the d:fine easy to fit, and didn't have too much trouble finding a good position for the boom and capsule.

The cable clip is smooth and rounded, and is comfortable against the skin, yet doesn't tend to snag on clothing. It's much better than those nasty metal clips some mics use, which resemble a cross between a crocodile and a piranha. After fitting the d:fine once and getting used to the ear-hook design, it only took seconds to fit and position it.

Adjustment is basic but effective: the whole boom slides backwards and forwards in the carrier, which allows it to extend or retract by about an inch, plus the boom can be rotated by 180 degrees to facilitate left or right-side positioning. Swivelling and adjusting the boom is easy, and the boom is stronger than its slender appearance suggests.

Once the d:fine is in place, it's very comfortable, and every person who tried one said that they hardly noticed its presence. I put one on myself and (making sure I was alone and unobserved) jumped around a bit, but the d:fine stayed firmly in place. Again, the positioning of the cable clip is important, as movement of clothes rather than head or body would be more likely to cause the mic to move.

The cable is terminated with a gold‑plated MicroDot connector (a mini-jack version is available), and DPA supply various adaptors for use with different makes of standard transmitter. There's also a MicroDot-to-XLR adaptor (the DAD6001-BC), which is an active balancing module for plugging the d:fine straight into a standard 48V phantom-powered input, or driving long lines. The MicroDot connector is a lovely bit of engineering on its own: it's securely mounted on the cable, and the locking ring spins round smoothly, without twisting the cable and causing damage.

I tried the two mics (omnidirectional and cardioid) on stage, then took them back to base for some more listening, and found the sound quality of both versions to be excellent. They both have a spacious, airy character that doesn't add any colouration. The sound is natural and clear, and gives you the best chance of producing great results even in less-than-perfect acoustic spaces.

Male and female voices were presented just as well, and of the two mics my personal favourite was the directional capsule, which sounded so natural that even one particularly fussy performer who said they "absolutely cannot sing wearing those things, dear” monitored on headphones while playing about with the d:fine in the studio, and said, in surprise "it sounds just like me”. The omnidirectional capsule doesn't require such critical positioning as the directional, in order to achieve a good all-round balanced sound, but I found it to be more susceptible to plosives than the directional version.

In summary, I have to say that the d:fine is an excellent mic from just about any point of view. The tiny capsule looks great close up but is discreet enough to be almost invisible for live theatre work, while the single-ear mounting system is easy to fit and adjust, comfortable to wear, and stays where it's put.

The sound quality is beyond question, and the ability of both of these mics to handle high SPLs without distortion places them in the top division. I'd say you'd have to try very hard to go wrong with the d:fine. When you combine this exceptional level of audio performance with a super-effective mounting system, you have a seriously good headset microphone on your hands. Or your head.

Competitive headset microphones include the Sennheiser HSP series and the Countryman Associates' E6.

If you want to see a great demonstration of the d:fine and its solid fitting, you should have a look at the 'parkour video' produced by DPA (http://youtu.be/P7C0TeLEKLo), which shows a chap wearing a d:fine and doing a few things you really shouldn't try at home.

The accessories supplied with the d:fine include three colour-matched foam windshields for close-up or outdoor work, or where the artist has a tendency to pop. There is also a set of different-coloured identification clips that fit on the cable, and can also be used for joining two cables together, if an in-ear monitoring system is being used by the same performer, for example.

An interesting and really useful accessory is the make-up shield, which is a little red plastic cap for fitting over the mic capsule. It then prevents makeup products such as hairspray from coming into contact with the mic. It's easy for the person wearing the mic to use the shield, although a dressing-room mirror comes in handy, as the cap uses a push fit and you need to be quite accurate when attaching it.

I did find a small problem when trying this accessory: the make-up cap has a tendency to grip the capsule's outer protection grid, which then comes away with the make-up cover upon removal. The protection grid itself is a very small, featherweight item that covers the capsule, and also uses a gentle push fit. Since it's such a small thing, misplacement could easily go unnoticed. This could lead to the outer grid becoming lost, leaving the capsule without its protection during the performance.

It's also very easy for the grid to become detached when handling the mic in general, and if I were running these mics regularly I'd definitely buy a few spares, since this grid is the only extra outer protection the capsule has.

Speaking of spares, the most vulnerable and often-abused component of a headset mic system is the cable, and the d:fine has a detachable lead that's easily replaced. To replace it, simply pull back the rubber cover, pull the coupling apart, and push in a new cable. Even if a cable does break, you'll be up and running again quickly.

The DPA d:fine is a small and discreet headset mic that's well thought-out, very well made, and sounds incredibly clear and natural. The mic is light and comfortable to wear, yet won't come loose in a hurry, and comes packaged in a very sturdy case. A recommended product.